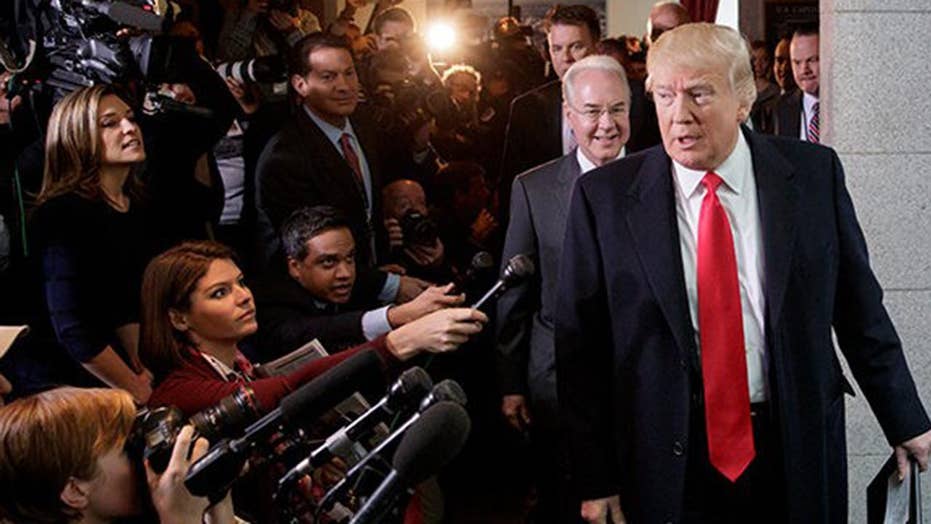 Are media out to get Trump?

A gap between on and off the record.

Imagine the frustration building in elite media offices across the country.

Lately, the members of the elite media have been relentlessly bashing President Trump.

The reality they have been promoting has been one in which the White House staff is in chaos; a hardline, supposedly dangerous right-wing hawk has been nominated to be national security adviser; and some of the most important news of the day centers around a woman with a lurid tale from more than a decade ago.

Meanwhile, deeply nostalgic TV personalities, who have been nurtured on the true faith of demonstration liberalism, have been fondly describing how anti-gun protests are bringing back memories of the civil rights and anti-Vietnam War movements.

In weaving together this false narrative, members of the elite media are collectively building an effort to uplift left-wing values and diminish the achievements of conservative leadership – specifically the Trump administration.

However, after all this effort, President Trump’s approval rating has increased.

Whoever thought up the stunt of gathering more than 1,000 Central Americans in a caravan to travel across a complicit Mexico toward the U.S. border had no idea of the opportunity they were giving President Trump.

A recent CNN poll found that job approval for President Trump increased from 35 percent in February to 42 percent in March. The result was so shocking that CNN commentator Chris Cillizza, who is normally deeply anti-Trump, had to spend time analyzing the voter blocs in which “Trump performed significantly better in March than he did in February.”

In the CNN poll, President Trump saw big gains with men (8 points), young voters (8 points), middle-aged voters (9 points), and college graduates (10 points). Cillizza called the increases among younger and college educated voters “intriguing,” and said they were “most likely” due to the passage of the Tax Cuts and Jobs Act.

The Trump Approval Index History, published by Rasmussen Reports, has consistently showed the president’s approval in the 40s – even hitting 50 percent on Monday.

Importantly, the Rasmussen Reports Daily Presidential Tracking Poll shows that while President Trump’s average monthly job approval rating has dropped from February to March, his daily rating has been mostly at or above President Obama’s 2010 rating since early February.

How could this be happening? How could a month of unending anti-Trump media lead to his gaining ground?

Rasmussen again had a big part of the answer.

A recent Rasmussen Reports national telephone and online survey finds that 52 percent of likely American voters believe most of the news media are against Trump’s agenda, while only 5 percent thought reporters are in support of Trump’s agenda.

The elite media’s intense and pervasive hostility has begun to vaccinate the American people against its opposition to President Trump.

At the same time, the Trump presidency has a lot of good things going for it.

The Republican tax cuts are working. People are getting bonuses and pay raises, and they are seeing companies beginning to reinvest in America.

The president’s strong actions against Russia after the poisoning of a former Russian spy and his daughter in London pretty well knocked down any assertion that President Trump is unwaveringly pro-Putin.

More and more foreign leaders are coming to the White House because President Trump is being recognized and acting as a world leader, despite the elite media’s effort to undermine him.

President Trump’s decision to talk with North Korea strikes most Americans as a welcome alternative to fighting another war on the peninsula. With Mike Pompeo and John Bolton nominated as secretary of state and national security adviser, respectively, it is hard to argue the Trump administration will go soft or be deceived by the North Koreans during the discussions. As Winston Churchill once said: “Meeting jaw to jaw is better than war.”

Whoever thought up the stunt of gathering more than 1,000 Central Americans in a caravan to travel across a complicit Mexico toward the U.S. border had no idea of the opportunity they were giving President Trump.

If we ever needed to demonstrate the case for a strong border wall, this supposed Central American invasion of our southern border will convince most Americans.

This may all change, but for the moment, President Trump is winning and the elite media is not.