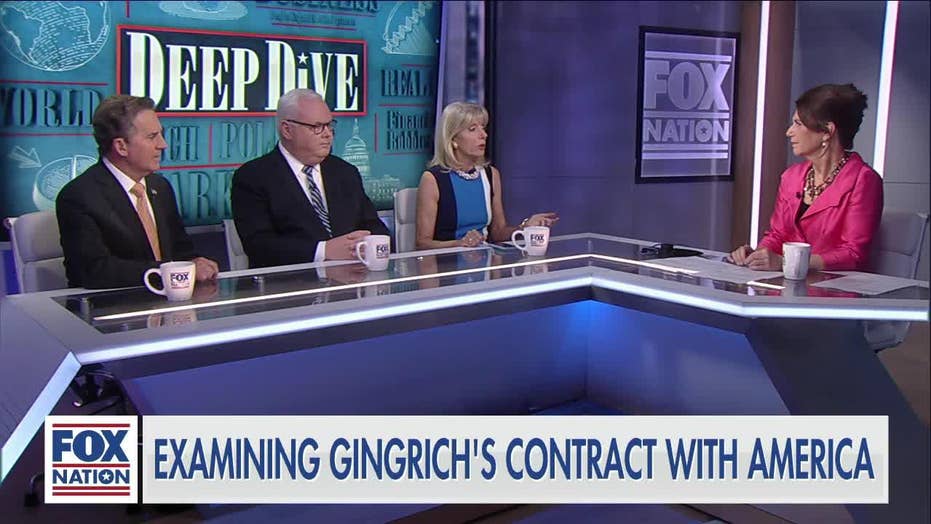 What lawmakers could learn from Newt Gingrich's&nbsp; ​​​​​​​Contract with America'

Editor’s Note: Fox News Channel will broadcast a documentary titled “Inside the Contract with America 25th Anniversary” at 8 p.m. EDT Sunday. In 1994 Newt Gingrich led Republicans to one of the most stunning electoral victories in American history. Twenty-five years later he and his team reveal the inside story of how their Contract with America ended 40 years of House Democratic rule and changed our politics forever.

I am delighted that Fox News Channel will air a special program at 8 p.m. EDT Sunday on the 25th anniversary of the Contract with America.

It is also the topic of this week’s “Newt’s World” podcast.

We are once again in a period where there are big decisions to be made and big questions to be answered.

HOW NEWT BEAT BERNIE IN BATTLE OF IDEAS: NEW DOC ON 25TH ANNIVERSARY OF 'CONTRACT WITH AMERICA'

When you look back on what happened with the Contract with America and the 1994 election, it was a moment of decisive change.

At the time in our history, no matter what the Republicans were doing at the presidential level, and to some extent in the Senate, we just could never become the majority party in the House.

Yet, suddenly we were able to achieve something historic. Forty years of Democratic control ceased in one evening. A major part of this was the adoption of the Contract with America by the House Republicans. The contract was important, first of all, because it was about things the American people wanted.

It was about balancing the budget. It was about reforming the Congress and the welfare system. It was about cutting taxes. It had a series of steps that 70 percent or 80 percent of American people really wanted to have Congress take – and they knew that after 40 years, the Democrats had failed to take them.

After four decades, exhaustion had set in and the American people were ready for something new.

It was also historic because it decisively shifted the balance of power. For 40 years, people knew the Democrats were in charge of the House. If you were a Republican considering a run for Congress, you knew at the time that you were running to serve in the minority.

By contrast, if you were a Democratic House candidate, you took for granted that you would serve in the majority. This meant it was much easier for Democrats to recruit – and much harder to recruit Republicans. These facts had become self-fulfilling prophecies. But they all changed 25 years ago.

So, please watch the Fox News special and listen to my podcast to learn all about how the Contract with America came about. I think it will be a great civics lesson for the American people – and a great blueprint for Republicans running in 2020.