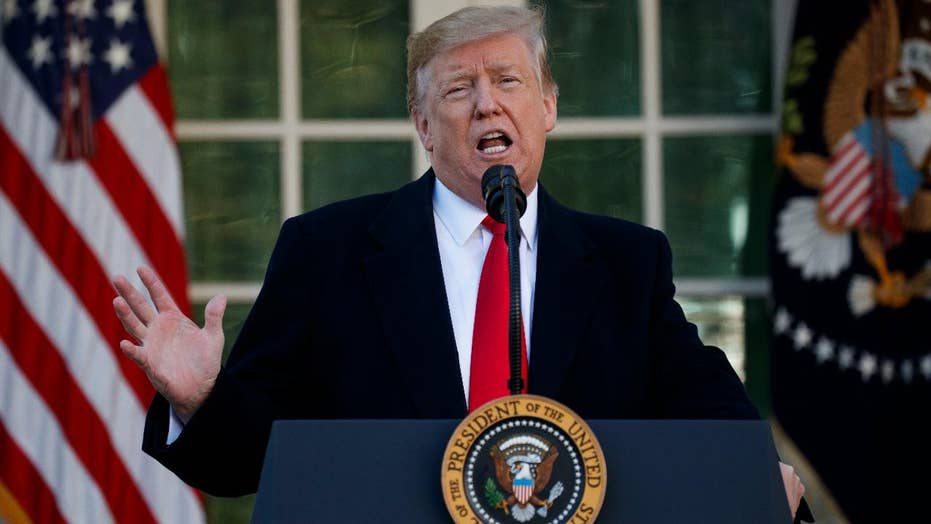 As you listen to the liberal media, the Never Trumpers and the left-wing Trump haters chatter on about President Trump’s current situation, remember these two numbers — 35 and 49.

The first number was President Ronald Reagan’s approval in January 1983.

The second number was the number of states Reagan carried 22 months later.

I am not predicting President Trump will carry 49 states. This is a different environment, and the tribalism that divides the country is deeper than it was 36 years ago.

HOW MUCH WOULD 'MEDICARE FOR ALL' COST? DEMOCRATS' HEALTH CARE PLAN EXPLAINED

However, in contrast to the enthusiastic doomsayers on television, I am willing to predict President Trump will recover. Also, he is much more likely to be re-elected than any of his opponents at The New York Times, The Washington Post, or the liberal networks currently believe.

President Trump’s resilience, despite two straight years of the most negative media coverage of any president since Lincoln (at least 90 percent negative according to studies by the Media Research Center that analyzed nightly broadcasts) is a sign that he has a devoted base that will stick with him. The most recent unemployment applications are the lowest since November 1969 (when there were a lot fewer Americans at work). There are powerful initiatives underway to continue to increase American jobs and economic growth.

The left will do for Trump what it did for President Reagan and Prime Minister Margaret Thatcher, and what it is currently doing for Prime Minister Theresa May (who is surviving because the alternative is so terrible). A few more proposals for 70 percent tax rates, sanctuary states, tax paid health care for everyone including illegal immigrants, open borders, anti-Semitism, and anti-Israeli hostility, and the Democrats will begin driving away everyone but the hard left.  California Governor Gavin Newsom’s wildly left-wing ideas are going to be a striking contrast to President Trump’s comparatively mainstream views (Newsom was mayor of San Francisco and is carrying its leftist ideology to the entire state). New York Congresswoman Alexandria Ocasio-Cortez may set a new standard for willful ignorance by a non-Hollywood personality. There is a point where smiling while saying things that are factually false simply doesn’t sustain a national movement.

The energy in the Democratic Party is entirely on the left, and as Hillary Clinton discovered, the nominating process is going to drive the Democratic candidates to get as nutty as necessary to please the new generation of radical bigots.

The media’s new enthusiasm for third-party billionaires (Starbucks anyone?) is a big help to Trump’s re-election.  Any third-party candidate will divide the anti-Trump vote and have no effect on the pro-Trump vote. The White House should encourage every would-be third-party leader. The more the merrier from the Trump perspective.

The Never Trump Republicans will get a lot of media and will be socially celebrated by the Washington, New York, and Hollywood crowds. They will do Sunday shows, be invited to speak at establishment events, and have paid staff egging them on (so they can continue to get paid). The Never Trump candidates will also be crushed by President Trump in Republican primaries.

Trump, like Reagan, learns and thinks a lot more than his detractors acknowledge.

The 15 percent who will have been repelled by the left’s craziness and turned off by President Trump’s style will enter the summer of 2020 wishing they had a better choice. In the end, they will have to gamble on the least dangerous and least bad future.

He is accomplishing far more around the world than anyone thought possible (note the head of NATO just said Trump had gotten the alliance to add $100 billion toward defense and commended Trump’s tactics to contain Russia). The Chinese are losing the trade fight, and they know it. NAFTA has been renegotiated. Kim Jong Un has marginally changed his behavior in the right direction. Trump has a remarkable number of personal relations with heads of government and communicates with them by telephone as often as any president in history.

Mueller and the anti-Trump Deep State will continue to be annoying, and their news media manipulation will keep the left enthralled. Need to lock an American up in isolation for 23 hours a day while awaiting trial? That is what Mueller has done to Paul Manafort. Need to ensure TV coverage of a fully armed dawn FBI raid? Just invite CNN along as Mueller did last week at Roger Stone’s house. Mueller will continue to use armed force in the middle of the night against non-violent Americans who have indicated they would cooperate.

And yet, as Andy McCarthy wrote after the Stone indictments, none of this proves anything about Trump and Russia, which was the original story.

In fact, President Trump has been much tougher on Russia than President Obama ever dreamed of being. From sanctions to the military buildup of NATO, to rebuilding missile defenses and forward positioning in the Balkans, to offensive weapons for Ukraine, the president has been tougher, not softer. Yet, the left’s innuendos and attacks continue to paint Trump, as The New York Times hysterically put it, as a potential Russian agent.

The Mueller investigation will eventually be put in perspective and will lead to serious reforms to limit the threat of an out-of-control deep state in the Justice Department.

The American people will gradually realize that this whole effort has been a political hoax to smear the president, which has weakened the country and undermined the rule of law.

The hard left will go into the summer of 2020 chanting hatred and believing everything bad about Trump. They will represent about 40 percent of the country. The hardcore Trump supporters will go into the summer of 2020 amazed at how much their leader has achieved despite unending news media, Democratic hostility, and splits in the GOP. They will make up 45 percent of the country.

The 15 percent who will have been repelled by the left’s craziness and turned off by President Trump’s style will enter the summer of 2020 wishing they had a better choice. In the end, they will have to gamble on the least dangerous and least bad future. When that happened in 2016, they broke overwhelmingly for Trump over Clinton, and the late deciders made him president.

There will be three big things helping Trump in 2020:

1.    The Trump administration’s accomplishments will be real (a future column will outline the wave of breakthroughs in our lives that will start being felt in the next 18 months).

2.    The hysteria and dishonesty of the investigations and their irrelevancy in terms of Trump as president will be obvious, and only the left will pay them any attention.

3.    Breakthroughs like criminal justice reform, a cure for sickle cell disease, better education through parental choice, the best African American employment rate in history, and the like will lead to Republican breakthroughs with minorities (as happened surprisingly in both Florida and Georgia against Democratic African American candidates for governor – in both states the margin of victory was African Americans voting Republican).

Why should you believe them now?