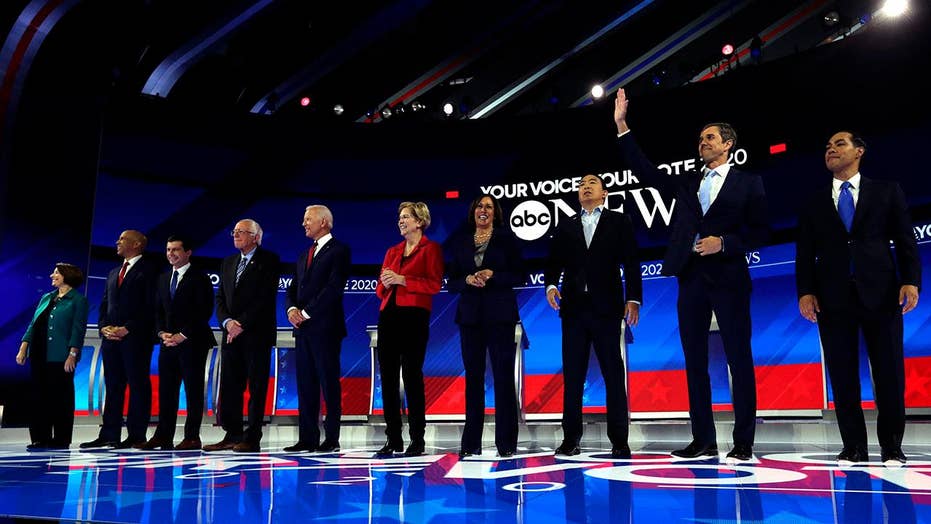 2020 Democrats want to be 'clear' during presidential debate

Remember the exciting, unpredictable and entertaining 2015-16 Republican presidential debates?  Who would candidate Donald Trump take down this week?  How would he dominate media questioners yet again?

Whether you were for Trump, appalled by him or just curious, each debate was worth watching.

Trump was so different – and so cheerfully direct and aggressive – that people began to see the debates as a sort of reality TV (which is what they should be). Our country is better when more people want to watch political debates and participate in elections.

By contrast, Thursday’s Democratic debate was a bore, with an old-time politician tone that made it painful to sit through.

After about 30 minutes of policy-wonk jargon about incomprehensible details of health policy, Sen. Kamala Harris, D-Calif., remarked: "This discussion has given the American people a headache."

Like or dislike Trump, I can’t imagine a participant in a Trump-energized presidential debate saying – as South Bend, Ind., Mayor Pete Buttigieg did – that the debates "are becoming unwatchable."

The most revealing moment of the debate may have been former Vice President Joe Biden’s comment that to help poor children learn more words, parents should “make sure you have the record player on at night.”

It may be tricky for Democrats if they nominate someone in 2020 who is mentally in a world of record players. It will be quite difficult to try to be the party of the future when you have a candidate of the past.

Similarly, the more radical candidates – virtually everyone other than the two semi-moderates, Biden and Sen. Amy Klobuchar, D-Minn. – seemed to be in a contest to alienate the most Americans.

Just in case the talk about "Medicare-for-all," getting rid of private insurance, defunding charter schools and the usual left-wing radicalism wasn’t enough, former Rep. Beto O’Rourke of Texas set the classic example of driving away voters and alienating entire regions of the country.

Similarly, the more radical candidates – virtually everyone other than the two semi-moderates, Biden and Sen. Amy Klobuchar, D-Minn. – seemed to be in a contest to alienate the most Americans.

When debate moderator David Muir of ABC News questioned O’Rourke about his recent comments about firearms bans and confiscations, Muir asked bluntly: "Are you proposing taking away their guns?"

Apparently, O’Rourke wanted to make absolutely certain that the millions of law-abiding Americans who own guns would understand that his candidacy was a mortal threat to their freedom and Second Amendment rights.

Sen. Elizabeth Warren, D-Mass., also reminded millions of Americans about her elitist isolation from most people when she said: "I've actually never met anybody who likes their health insurance company."

Warren’s comment is quite revealing since the Kaiser Family Foundation reported that 58 percent of Americans oppose a health care policy plan that would force them to give up the private insurance option. Only 37 percent favored getting rid of all private health insurance.

Meanwhile, support for “Medicare-for-all” continues to drop when Americans’ are told it would raise their taxes (37 percent), threaten the current Medicare program (32 percent), and cause delays in treatment (26 percent).

Warren, of course, represents the 37 percent. President Trump would (and will) be happy to defend the 58 percent.

Every time there is another boring, wonkish and disconnected Democratic debate like this, the 2020 Trump victory will become bigger and bigger.