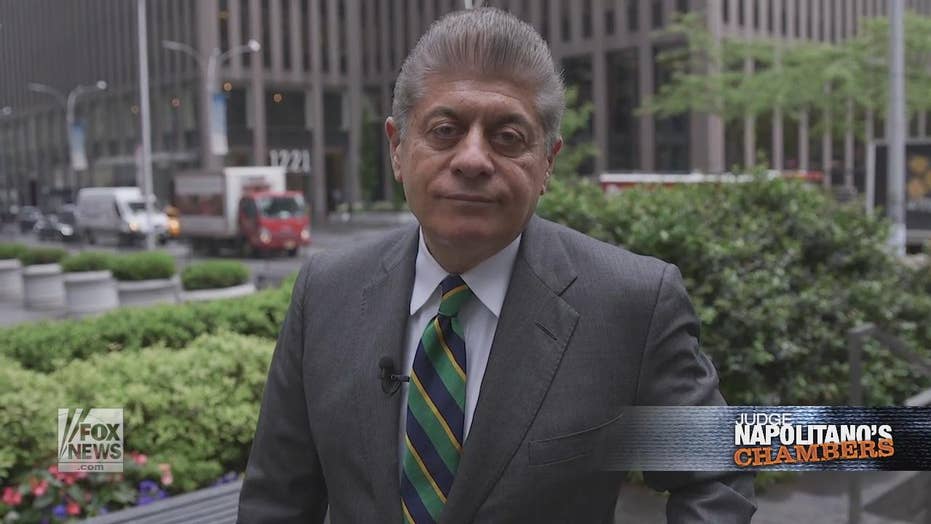 Napolitano: Spying is out of control – Why you should care

Judge Napolitano's Chambers: Judge Andrew Napolitano reacts to the hyper secrecy behind the Foreign Intelligence Surveillance Court and how that leads to a lack of transparency that affects the public

“The makers of our Constitution … conferred, as against the Government, the right to be let alone -- the most comprehensive of rights and the right most valued by civilized men.” -- Justice Louis D. Brandeis, 1928

FISA required that all domestic intelligence surveillance be authorized by a newly created court, the Foreign Intelligence Surveillance Court. Since 1978, FISC has met in secret. Its records are unavailable to the public unless it determines otherwise, and it hears only from Department of Justice lawyers and National Security Agency personnel. There are no lawyers or witnesses to challenge the DOJ or the NSA.

Notwithstanding this handy constitutional novelty, the NSA quickly grew impatient with its monitors and began crafting novel arguments that were met with no resistance. Those arguments did away with the kind of particularized probable cause about targets of surveillance that the Constitution requires in favor of warrants based on the probability that someone somewhere in a given group could provide intelligence data helpful to national security, and because the FISC bought these arguments, the entire group could be spied upon. The FISC unleashed the NSA to spy on tens of millions of Americans.

That was still not enough for the nation’s spies. So beginning in 2005, then-President George W. Bush permitted the NSA to interpret President Ronald Reagan's executive order 12333 so as to allow all spying on everyone in the U.S., all the time. The NSA and Bush took the position that because the president is constitutionally the commander in chief of the military and because the NSA is in the military, both the president and the NSA are lawfully independent of FISA.

The NSA does not acknowledge any of this, but we know from the Edward Snowden revelations and from the testimony of a former high-ranking NSA official who devised many of the NSA programs that this is so.

The NSA’s use of FISC-issued warrants is only one of a half-dozen tools that the NSA uses, but it is the only tool that the NSA publicly acknowledges. FISC-issued warrants do not name a person as a suspect; they name a category. For example, it could be customers of Verizon, which includes 115 million people. It could be telephones and computers located at 721-725 Fifth Ave. in New York; that’s Trump Tower. It could be all electronic devices in the 10036 ZIP code; that’s midtown Manhattan.

When the NSA obtains a FISA warrant and captures a communication, the participants often mention a third person. The federal “minimization” statute requires the NSA to get a warrant before surveilling that third person. Last week, we learned that last month, the FISC rebuked the NSA for failing to minimize by continuing to surveil third parties to the sixth degree without warrants.

Here is an example of warrantless surveillance to the sixth degree. The NSA surveils A and B pursuant to a FISC-issued warrant; A and B discuss C; the NSA, without a warrant, surveils C talking to D; C mentions E, and D mentions F; the NSA surveils E and F without warrants, etc. This continues going out to six stops from the A-and-B conversation, even though this is prohibited by federal law. The final stop, which involves huge numbers of people, has been proved to have no connection whatsoever to the warrant issued for A and B, yet the NSA continues to spy there.

But it doesn’t stop there. The Bush interpretation of EO 12333 is still followed by the NSA. Its logic -- "I am the commander in chief, and I’ll do what I need to do to keep us safe, and the NSA can do what I permit" -- permits universal surveillance in flagrant violation of FISA and the Constitution. It was used to justify the surveillance of Donald Trump before he was inaugurated. It no doubt still is.

The availability of the information acquired by this massive spying is a serious threat to democracy. We know from the Susan Rice admissions that folks in the government can acquire intelligence-generated data -- emails, text messages, recordings of telephone conversations -- and use that data for political purposes. Just ask former Lt. Gen. Michael Flynn. And we know from recent tragedies in San Bernardino and Orlando, even Manchester, that the NSA is suffering from information overload. It has too much data to sift through because it does not focus on the bad guys until after the tragedies. Before the tragedies, it has no focus.

The now public rebuke of the NSA by the FISC is extraordinary, but it is also a farce. The FISC is virtually owned by the NSA. That court has granted 99.9 percent of requests made by the NSA since the court was created. Despite all the public revelations, the FISC looks the other way at non-FISC-authorized NSA spying. The judges of the FISC have become virtual clerks for the NSA. And the FISC has become an unconstitutional joke.

Where does all this leave us? It leaves us with a public recognition that we are the most spied-upon people in world history and that the president himself has been a victim. This fall, the NSA will ask Congress to reauthorize certain spying authorities that are due to expire at the end of the year. Congress needs to know just how unconstitutional, intrusive and fruitless all this spying has become.

Perhaps then Congress will write laws that are faithful to the Constitution -- and if so, maybe the folks empowered by those laws will follow them.