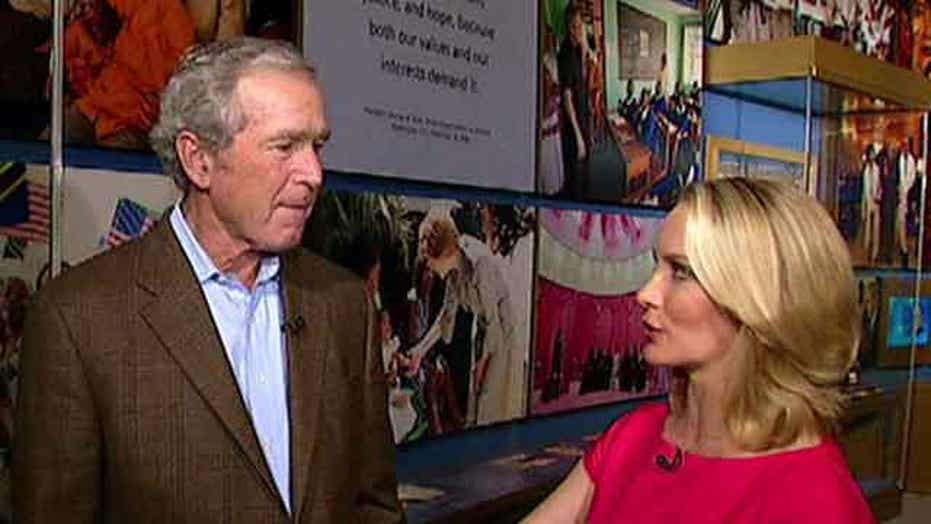 Memories from the White House

The George W. Bush Library and Museum opens this week in Dallas and many already have written about our 43rd president and his legacy. As commentators and historians hash over the big decisions, successes and mistakes over those eight years, here’s my personal take on what President Bush means to me.

On election night 2000, I had never met then-Governor Bush, though I’d supported him for years. I believed he would be a strong, optimistic and gracious president with solid conservative principles and a big heart.

When I got a call to volunteer on the campaign in early 2000, I had to turn it down due to a new job and a new life we were trying to start in San Diego. When I hung up the phone, I cried, “Now I’ll never get to work for George Bush. “

Then the 9/11 attacks changed everything for everyone. I moved back to D.C. and worked for the Bush administration from the fall of 2001 until the last day on January 20, 2009. Over those years, President Bush became a friend and a leader who made me strive to be a better person and citizen.

Here are some of my favorite memories:

• One night when I first took the deputy press secretary job, I went with him on Marine One to an event in rural Virginia for the Boy Scouts Jamboree. Weather had kept us from going for two days, but on the third night, we made it out before another storm rolled in. On the way home he insisted on sharing his peanut butter and honey sandwiches with me and the chief-of-staff, Andy Card. The sun had started setting as we left to return to the White House and we talked just like friends do – he asked me all about my family, travels, pets and goals. I remember every moment of that night – including the orange and pink sunset that lasted the whole flight.

• Another time he howled when I told him how my mom had asked me about my first week at the White House, and how I’d told her all about how great it was and how Karl Rove had been so nice and helpful to me, and how he was just so smart and how happy I was to be at the White House….when I broke to take a breath my mom said, “Who the hell is Karl Rove?”

• Every week he held a secure video conference either with Iraqi Prime Minister Maliki or Afghan President Karzai, and I learned from his strong but gentle guidance of them – always respectful, firm, encouraging and non-condescending. I noted that even behind closed doors, President Bush strongly, ably and graciously defended America.

• He used to catch my eye during policy meetings and tip me a wink with a little smile as we had noticed when Vice President Cheney had been “resting his eyes.” Then we’d share a laugh realizing once again that it was clear the VP had heard every word.

• President Bush treated my dad like the king of England when he came for a state dinner – as if his eight years in the White House never would have been complete if Leo Perino hadn’t come for a visit.

• He insisted we turn the other cheek and focus on the issue, never the personal. With forgiveness came humility – not gloating and allowing others to bask in a political win. I felt like we never got to dance in the end zone, but that that was the right thing to do.

• He got to know his staff and how they did their best work – some needed chiding, others needed to be pushed, but I needed reassurance. When he’d call me to the Oval Office, he’d say, “And tell her there’s nothing wrong.”

• He also knew I liked to be told I was right. One day after a press conference, I said that while I thought it’d gone well, that one thing he said would be taken out of context and be the headline. He disagreed. A few hours later, I got a call in my office from the residence. It was the president. He said, “Hey, just wanted to call and tell you that you were right.” I said, “Excuse me, sir, could you repeat that?” He did. And we laughed.

Mrs. Barbara Bush once told one of my Minute Mentoring events that when she talked to her son about me and to me about her son that “Loyalty goes both ways.” Indeed.

I believe that leaders should inspire you to be more like them. President Bush set a high bar and I thank him for the opportunity he gave me. He was a good president and is a good friend.