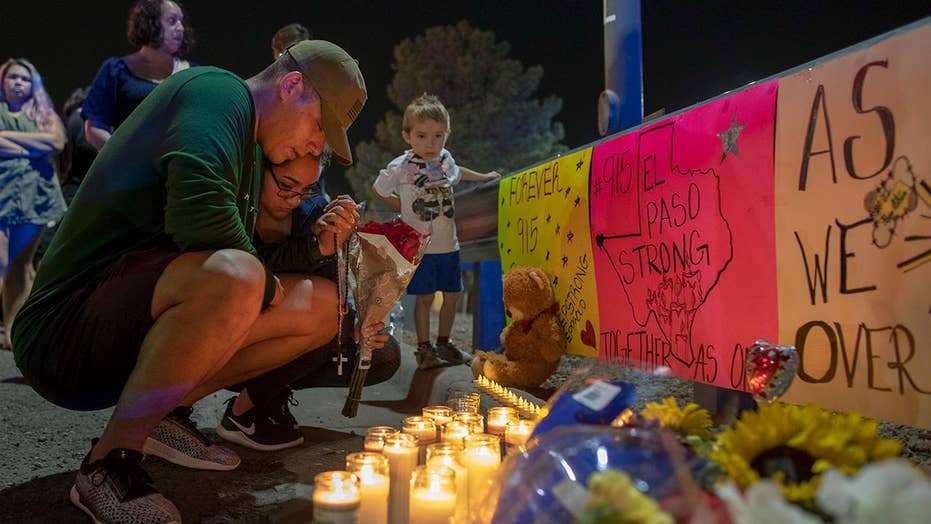 What did the El Paso and Dayton shooters have in common?

Raymond Arroyo breaks down the common ties the two mass murderers shared on 'The Ingraham Angle.'

After a tragic and bloody weekend of mass shootings in El Paso and Dayton, as well as widespread shootings in Chicago, I responded by doing one of the most powerful things I know to do in times of crisis – I prayed.

It used to be that one of the most meaningful things you could offer another person experiencing unimaginable anguish, loss and confusion were your “thoughts and prayers.”

The traumatized must feel great comfort knowing people are focusing their prayers – the most intimate conversations between a person and God – on the situation and imploring God to intervene.

Scripture tells us in James that “the prayer of a righteous person is powerful and effective.” Similarly, sincere “thoughts” help those suffering know that people outside the situation are trying to empathize and imagine what it would be like to be in their shoes.

Those kinds of “thoughts” align hearts with those in distress and move entire communities to stand in solidarity.

This criticism will not stop me – I will continue to pray for the victims and their families and for an end to this mindless violence, and I hope you will, too.

In fact, I would posit that the lack of thoughts and prayers is probably the single biggest factor behind these horrors.

Some in America have tried to blame President Trump for these tragedies, which is ridiculous. The El Paso shooter reportedly wrote a deranged “manifesto” in which he predicted the media would blame his actions on Trump, but he said he’d been angry over illegal immigration for years before Trump ran for office.

The El Paso gunman said he thought illegal immigrants were using up resources that should be spent on universal health care and a guaranteed income – hardly issues favored by Trump supporters.

As for the Dayton shooter, he reportedly described himself on Twitter as a far-left Democrat and supporter of Sen. Elizabeth Warren of Massachusetts – a candidate for the Democratic presidential nomination – and praised Satan. He was reportedly upset by Trump’s election, and was impatient for socialism to come.

Classmates described the Dayton gunman as a bully who liked to threaten women. One of his deceased victims was his own sister.

In Chicago, the tragedy that’s being overlooked by the media is that over 59 people were shot – seven fatally – last weekend. Much of the violence in that city is attributed to gang crimes –hardly anything the president instigates.

Politics wasn’t the common denominator behind the violence. The shootings happened in Republican-led Texas and in Chicago, where the last Republican mayor left office in 1931. The El Paso shooter was a radical segregationist and the Dayton shooter a democratic socialist.

Racism wasn’t the common denominator either. The El Paso shooter was targeting Mexicans, the Dayton shooter targeted his sister and people at random, and the violence in Chicago was largely black-on-black gang violence.

The bottom line is this: you can pass laws, blame the weapons, ban free speech and argue politics from now until doomsday. But you’ll never legislate the evil out of people’s hearts.

This is never going to end until we have a reawakening of morality and values and invite God back into the public square, the public schools and the public discourse.

Kids must be reared to practice the Golden Rule, observe the Ten Commandments and believe that we are all made in the image of God.

We must once again value mutual respect and common decency. We must learn to care for each other and watch out for each other so that when one is bullied, alienated or starts down the wrong road, someone else is there to notice and do something about it.

We must cherish life as sacred and believe that superficial differences like skin color are meaningless.

Until then, passing more laws and pointing more fingers is just rearranging the deck chairs on the Titanic.

The objection and trivialization of prayer by so many in our country today is one of the main reasons I’m a part of My Faith Votes, a nonpartisan group mobilizing people of faith to vote in every election and work to better their communities through the values of their faith.

The biggest irony in all this may be that people of faith – the very folks derided for offering their thoughts and prayers – are the same people whose values compel them to care for others no matter what.

It’s ludicrous that the ones being attacked when they reach out in compassion to victims of tragedy are the least likely to allow the division in our country to create an actual divide between them and their communities and the most likely to work to heal their communities.

So I hope you’ll join me, ignore the scoffers, and keep saying prayers. It’s not a meaningless gesture. It’s the only thing that’s ever really going to help.

This op-ed was adapted with permission from “Twin Tragedies,” which originally appeared on MikeHuckabee.com.