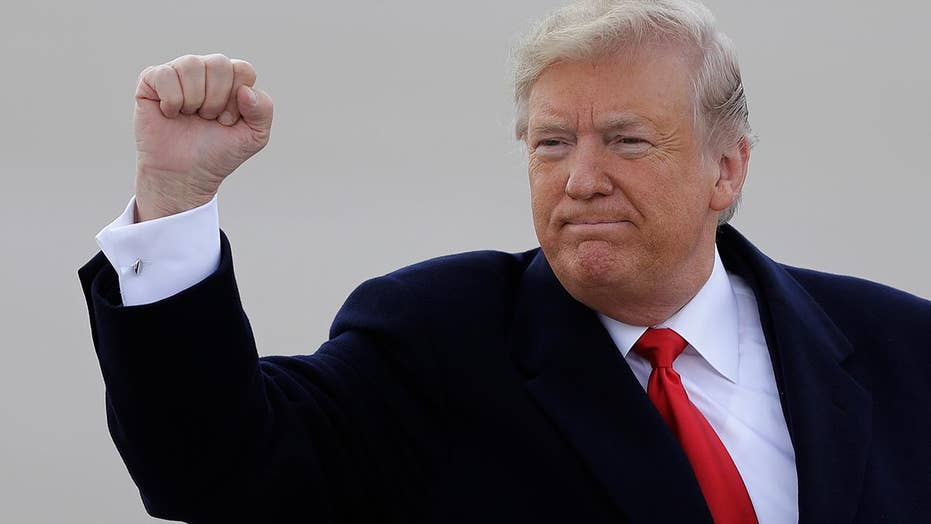 President Trump takes on media over anger in the country

White House defended the president's tweets, while some Democrats insist Trump is at least partly to blame for the anger and political divisions in the country. John Roberts reports from 'Special Report.'

Celebrities, spin and vicious attacks on President Trump and Republicans made for a predictable week in the anti-Trump media as Tuesday’s midterm elections approach.

Many journalists blamed President Trump for everything going wrong, but didn’t give him credit for the good economy or any of his other accomplishments.

In the past week, the president was depicted as a “white nationalist” whipping up “xenophobia” and promoting “the divisive issue of immigration.” (Notice how immigration is only divisive when you expect people to obey laws.)

Journalistic extremism was easy to find. “Hate is on the Ballot,” warned New York Times columnist Paul Krugman, claiming the GOP “has increasingly become the party of right-wing extremists.” He followed that up by claiming that “good people can’t be good Republicans.” Civility and all that.

Appearing on MSNBC, New York Times editorial board member Mara Gay complained about the “reality” that Trump is a “white nationalist president who is a threat to American democracy.” The Times wants voters to “put country over party” by doing what the Times always wants voters to do – go left.

Gay’s fellow panelists on MSNBC agreed and went to even greater extremes. Bloomberg Opinion Editor Tim O’Brien repeated Gay’s critique, adding that the president “has been a bigot and a white nationalist for a long time.” Trump even “kept a book of Hitler’s speeches on the nightstand by his bed,” according to O’Brien.

Over at CNN, Chris Cuomo blamed Republicans for a “campaign message” of “fear and loathing.” He went on to blast President Trump for depicting the immigrant caravans as “an invading force filled with dealers and murderers” so the president can “whip up as much xenophobia and conflict as he can.”

Cuomo summed it up as a “midterm hate campaign.” That sounds suspiciously like a description of MSNBC “Morning Joe” co-host Mika Brzezinski’s rant about the president. Here’s just one line: “The rhetoric of this racist, heartless, soulless man will lead to more violence.”

It all fit a theme – scaring the voters about President Trump and Republican candidates up for election.

NBC News Political Director Chuck Todd blamed President Trump for setting both the “tone” and the “rules” of our divisive politics. Todd acted clueless about the causes for the current state of the nation, saying that “we have a problem and we have a president who doesn't seem to believe he has a role to play in dealing with it.”

That wasn’t the narrative sinking in with voters. According to a Politico poll, 64 percent say that the media have “done more to divide than unite the country.” That’s 8 percent higher than those who blamed President Trump. So much for journalism’s victim narrative.

But there was light at the end of the tunnel – a shining beacon of hope: Oprah Winfrey. NBC “Nightly News” anchor Lester Holt oohed and aahed about Winfrey hitting the campaign trail for Democrats.

Holt told viewers: “It's got a lot of people asking, is Oprah also reconsidering a potential run for president?”

The next morning, “Today” show correspondent Peter Alexander continued to hype Democrats’ “star-powered inspiration.” Left unsaid was how Winfrey’s biggest support comes from the news media. They had to be disappointed when she admitted she doesn’t want to run for president.

It’s been a disastrous campaign season and it’s unlikely the news media will learn anything good from it. Maybe ordinary voters understand something journalists don’t – that they have a right to fair coverage. That journalists should cover all the news, not just the stories that help their friends.

Here are a few they skipped (Gosh, I wonder why): Democratic candidate for the Senate in Arizona, Rep. Kyrsten Sinema mocked the people of her state as “crazy”; and Democratic Sen. Joe Donnelly of Indiana made what The Washington Post called a “cringe-worthy and puzzling” racial statement about his staffers.

Count your blessings. Election 2020 will make this look like a checkers tournament.

2. Don’t Leave Out Hollywood: Celebrities hate to miss a party, especially the Democratic Party. An imminent midterm election brought them out in droves, both on TV and in person.

They echoed the journalistic call for civility. “Babe” star James Cromwell blasted our “nascent fascism.” “If we don’t stop (Trump) now, we will have a revolution for real. Then there will be blood in the streets,” he warned.

Using TV shows to push the election was commonplace this past week. The end credits for “This Is Us” promoted the left-wing, anti-gun group Everytown for Gun Safety, funded by former New York City Mayor Michael Bloomberg.

Both “Grey’s Anatomy” and Sarah Silverman’s “I Love You, America” tried their own tilted get-out-the-vote push. Silverman’s show mocked Christians with a “pansexual Jesus” who was getting ready to vote. He was snidely anti-Trump. “We live in a nation where they’ll let a Middle Eastern guy into their hearts but not into the country,” he commented, while pointing to himself.

3. Blaming Trump, Conservatives for the Massacre: It didn’t take long for the media to blame President Trump for the horrible attack at Pittsburgh’s Tree of Life synagogue. It didn’t matter that former presidential candidate Bernie Sanders (I-Vt.), the ambassador of Israel and the former head of the Ant-Defamation League all said not to blame the president. He was still the media’s “moral monster.”

The two most outlandish comments both came from CNN. GQ magazine correspondent Julia Ioffe made an offensive claim, saying that “this president has radicalized so many more people than ISIS ever did.” She nominally apologized for it at the end of the show, but that was hardly a legitimate excuse.

CNN Anchor Don Lemon (he’s “independent,” in case you hadn’t heard) used a broader brush for his attack. Lemon lashed out against “white men” while pretending to urge people not to demonize one another.

“So we have to stop demonizing people and realize the biggest terror threat in this country is white men, most of them radicalized to the right, and we have to start doing something about them,” Lemon said.

Those were hardly the only examples. CNN’s Alisyn Camerota accused Trump of “using some of the same language that the mass murderer at the synagogue used.”

“CBS This Morning” co-host Norah O’Donnell echoed that attack, charging the president with “specifically using the word ‘invader,’ which is also a word that the Pittsburgh shooter used.”

ABC’s quasi-former Clintonian anchor George Stephanopoulos rattled off several examples of violence and then placed President Trump “at the center,” “against the backdrop of the ugliest political climate in modern times.” But ABC isn’t biased. Or so I’ve heard.