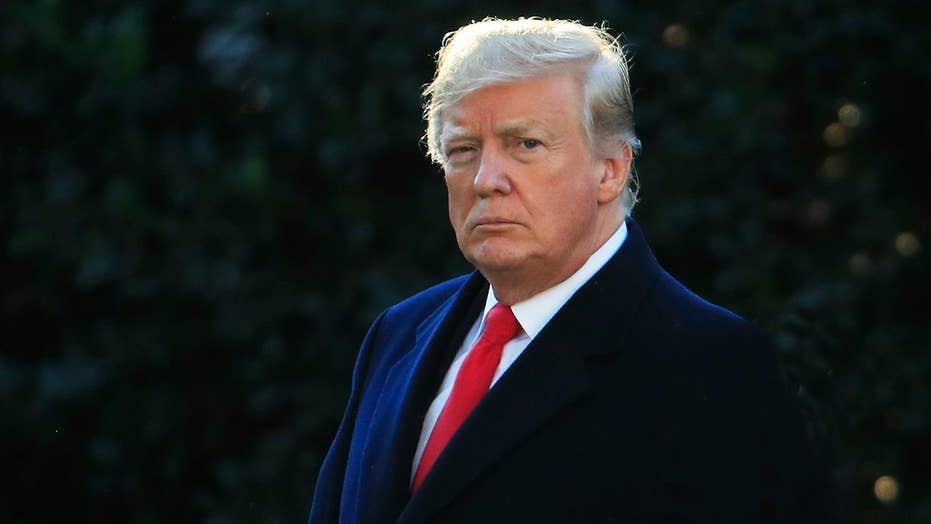 President Trump's critics call on him to tone down his political rhetoric after bombing attempts; reaction and analysis from 'The Five.'

The news this past week was dominated by the explosives sent to former President Obama, Hillary Clinton and other prominent critics of President Trump, followed by the mass murder at a Pittsburgh synagogue. Fortunately, none of the mailed explosives detonated, but 11 people were tragically killed in the synagogue attack.

So what does The New York Times choose to publish? An unbelievably disgusting and bizarre fantasy about assassinating President Trump. Some editor at the paper decided it would be fun to have “Five Novelists Imagine Trump’s Next Chapter.”

The day the mail bombs started arriving (and before the synagogue attack) the Times published a clearly labeled work of fiction by thriller author Zoe Sharp about the imaginary assassination of President Trump. In the piece, a Russian assassin is sent to kill Trump to cover up the disclosure that the Russians picked Trump to become president.

The assassin fails because his gun jams. But that’s not the ending. No, an obliging Secret Service agent lends a hand by offering his own pistol to the Russian assassin. “‘Here,’ the agent said politely. ‘Use mine. …’”

You could fill a thimble with the major media coverage of this insanity. When one person on Twitter told Sharp she had “laughed out loud” after reading it, Sharp replied: “that was my aim in writing it :)).”

Now imagine if a conservative media organization had run an identical work of fiction about the assassination of President Obama or another Democratic president. Picture the horrified media reaction.

Remember civility? Remember calls to tone down rhetoric about violence?

President Trump and Republicans drew harsh media criticism linking them to the actions of the person who mailed homemade bombs to Trump critics. Thankfully, federal law enforcement agencies swiftly tracked down and arrested a suspect accused of sending the 14 pipe bombs.

It didn’t matter to journalists that President Trump condemned the actions and said that “any acts or threats of political violence are an attack on our democracy, itself.”

That wasn’t enough for CNN. Anchor Anderson Cooper said the president was “speaking quite hypocritically.” Cooper blasted Trump for not naming the intended victims of the bomber. “He gave no names, nothing to indicate he sees them as individual human beings and distinguished former public servants,” Cooper said.

CNN White House Correspondent Jeff Zeleny got to the heart of the media complaint, saying that Trump “did not take responsibility at all for any of the heated rhetoric” that many journalists said could have motivated the bomber. Heated media rhetoric was OK, though, and there was plenty of it.

President Trump said Friday that the media were trying “to use the sinister actions of one individual to score political points against me and the Republican Party." It was hard to deny.

One news organizations after another piled on the blame.

MSNBC Politics Editor Jason Johnson pulled out all the stops attacking the president by saying: “He has always shown a sympathy or dismissiveness towards terrorism. He is a terrorist sympathizer.”

New York Magazine, referring the man charged in connection with mailing of the bombs, published a piece with the hyperbolic headline: “Trump’s Party Is the Petri Dish for Diseased Minds That Grew Cesar Sayoc.”

On HBO, Bill Maher said President Trump was “using a domestic terrorist attack to threaten the American media,” according to Mediaite. “That sounds like he’s not condemning the bomber, it sounds to me like he’s partnering with him,” Maher said Friday night.

CNBC’s Chief Washington Correspondent John Harwood retweeted that comment and added his own, noting that was “not exactly hidden at Trump rallies or CPAC gatherings,” even though there has been no evidence the bomber ever attended CPAC, the Conservative Political Action Conference.

Matt Schlapp, the head of the American Conservative Union, which runs CPAC, called the comment “disgraceful.”

Harwood backed off slightly, but still criticized “the extreme views toward the same alleged villains and imagined conspiracies.”

NBC “Nightly News” anchor Lester Holt said that President Trump has the “biggest megaphone” and concluded that there are “growing calls to turn down the heated political rhetoric before somebody gets hurt.”

Holt didn’t mention that several people on the right have already been hurt – including House Majority Whip Steve Scalise, R-La., who was shot last year by a supporter of former Democratic presidential hopeful Sen. Bernie Sanders, I-Vt., and nearly died.

Politico’s main headline pointed the finger right at the president in an article headlined: “Trump decries 'political violence' after years of stoking it.”

“The View” made an almost identical argument. Co-host Sunny Hostin said one former CNN colleague “said this is what happens when the president calls you the enemy of the people.”

3. Media Running Out of Time to Spin Election: While most journalists might be planning for election night coverage, some seemed intent on impacting the outcome ahead of time.

The most obvious was doomsayer and former Washington Post reporter Carl Bernstein of the famous Watergate duo.  Appearing on CNN’s “Reliable Sources,” he warned that the Trump White House was already planning legal challenges in the event of a “very close” vote where “Democrats were to win by five or seven seats.”

Then Bernstein added that Team Trump might use that scenario to “say that the election has been illegitimate, that that is really under discussion in the White House.”

You may recall that the 2016 election went this way. Pollsters predicted Trump would lose and might reject the election results. Instead, he won and it was the left that rejected the results.

But it wasn’t 2016 that viewers were hearing about. NBC News Political Director Chuck Todd did his best to keep Democrats interested in the idea of a blue wave by talking about other years.

Todd stressed that Trump’s approval rating was similar to ones in years when the president’s party had lost big in the House. “Bill Clinton in 1994 in this same period of time in October had a 48 percent approval rating and lost 54 seats,” he said.

At least Todd wasn’t blatantly cheerleading, like so many in the media have done for Democratic U.S. Rep.  Beto O’Rourke, who is running against Republican Sen. Ted Cruz for a U.S. Senate seat in Texas.

"You're a rock star!" ABC News reporter Paula Faris told O’Rourke, "no, you really are!"