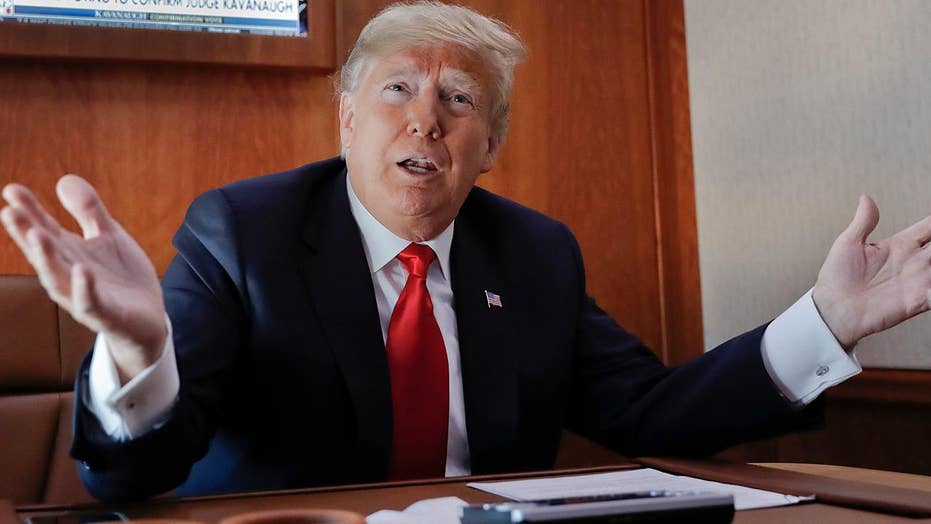 The 'Outnumbered' panel breaks down how the president's unconventional approach has turned the world of politics upside down.

10. He has secured the release of 19 people, including 16 Americans, from foreign captivity. When Pastor Andrew Brunson was freed by Turkey, he became the 19th captive released thanks to Trump. Others include: four held by North Korea; an aid worker and her husband held by Egypt; three UCLA basketball players and a Texas businesswoman held by China; a couple and their three children held by the Taliban; a former CIA officer held by Portugal; and two citizens held by Venezuela. That's more Americans freed in two years than President Barack Obama got released in eight. And unlike Obama, Trump did it without releasing terrorist leaders or sending planeloads of cash to rogue regimes, creating incentive for more hostage taking.

9. He delivered for the "forgotten Americans." The Trump boom is benefiting those left behind by the Obama economy. Manufacturing jobs grew at the fastest rate in 23 years and the unemployment rate for Americans without a high school diploma reached the lowest point ever recorded. The Wall Street Journal reports that wages rose 3.1 percent -- the biggest jump since 2009 -- and that "low-skilled workers are among the biggest beneficiaries."

8. He worked with Democrats and Republicans to pass important legislation. It didn't get a lot of attention, but Trump got a lot done on a bipartisan basis, including criminal justice reform, opioid and sex trafficking legislation, and a new "Right to Try" law giving dying Americans access to experimental medications.

7. He has ushered in a golden age for women in the CIA. Trump not only appointed Gina Haspel as the agency's first female director but also made Elizabeth Kimber the first women to lead the agency's clandestine service -- rewarding the CIA's "band of sisters" who have toiled to keep the country safe since 9/11.

6. His push to expand domestic energy production bore fruit. This year the United States passed both Saudi Arabia and Russia as the world's top oil producer.

5. In the six months after the Singapore summit with North Korea, he has made no concessions to Pyongyang. North Korean dictator Kim Jong Un expected to blow up some useless nuclear facilities in exchange for billions in hard currency. Trump has refused to play Kim's game. Not only has Trump not lifted sanctions, unfrozen North Korean assets, ended the Korean War or offered Pyongyang diplomatic recognition, but also he imposed new sanctions on members of Kim's inner circle.

4. He struck Syria again and eliminated the last vestiges of the Islamic State's physical caliphate. For a second time, he enforced Obama's red line against the use of chemical weapons. In December, U.S.-backed fighters captured Hajin, the last pocket of territory held by the Islamic State. The militant group is far from defeated, but Trump is right that we have knocked "the hell out of ISIS."

2. He pulled out of Obama's disastrous Iran deal and reimposed crippling sanctions on Tehran. The new sanctions have taken millions of barrels of Iranian oil off the market and led to the cancellation of major deals with European investors. And when Iranian protesters rose up to challenge the regime, Trump (unlike his predecessor) stood with them.

1. He stood by Brett Kavanaugh and even in the worst moments never wavered. Trump has confirmed a record 85 judges in his first two years as president. That total includes two Supreme Court justices, 30 appellate court judges and 53 district judges who will preside for decades. Trump's successful fight for Kavanaugh also helped him expand his Senate majority, as energized Republican voters threw out four Democratic incumbents who opposed Kavanaugh.

There were many more accomplishments not included in this list. Trump got Mexico, Canada and South Korea to sign new trade deals. He continued his regulatory rollback, replacing Obama's "Clean Power Plan" and his "Waters of the United States" rule and returning power to the states. He took on the International Criminal Court, which purports to have jurisdiction over U.S. soldiers and citizens. And his graceful handling of George H.W. Bush's funeral brought dignity to the office.

That is a strong record of success. We'll review the 10 worst things Trump has done in the next column.