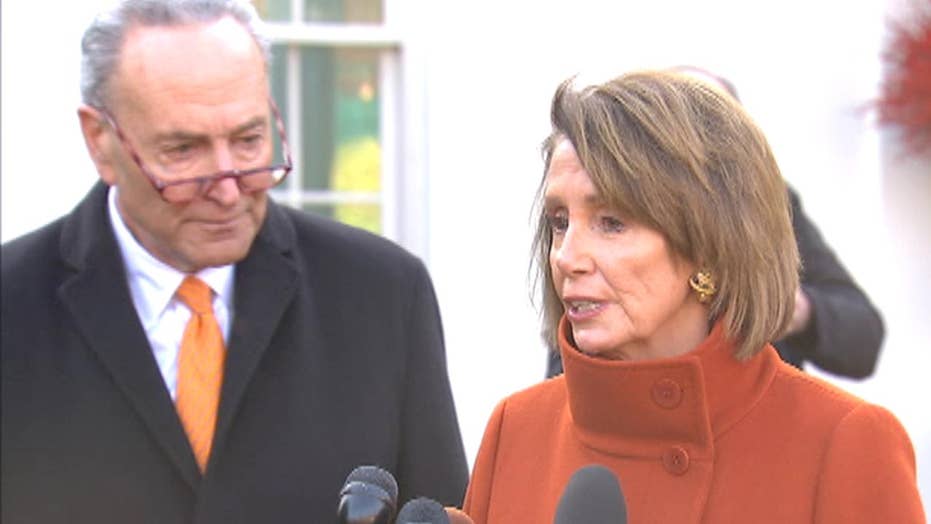 Democrat leaders address reporters after their meeting with President Trump on funding a border wall.

Good news for the incoming House Democratic majority! They have something President Trump really, really wants: money to build a border wall. Trump is desperate for this money. Mexico won't give it to him. Only congressional Democrats can. Without their consent, he can't deliver on one of the key campaign promises he made during the 2016 election.

There's a name for this in classic negotiating strategy. It's called "leverage." Good negotiators use leverage (something they have, which their adversary wants) to obtain what are called "concessions" (something their adversary has, which they want). The result is what experts call "compromise." This is how the civilized world gets things done.

But in a fit of pique, Democrats are throwing away their leverage, insisting that they will never -- under any circumstances -- give Trump the wall he so desperately wants. The reason? Because he wants it and they despise him.

MARC THIESSEN: TRUMP IS READY TO DEAL. ARE DEMOCRATS?

There is a name for this in negotiating strategy as well. It's called "insanity."

It would be one thing if Trump was demanding that Democrats make some great moral compromise. But he is not. Democrats say they are for border security. They may think that a wall is a costly and inefficient way to secure the border, but there is nothing inherently wrong with a wall. In 2006, 26 Senate Democrats -- including Sens. Charles Schumer, Barack Obama and Hillary Clinton -- voted for the Secure Fence Act of 2006, which required the Department of Homeland Security to build two layers of reinforced fencing along 700 miles of the U.S.-Mexico border. Is there some profound moral difference between a fence and a wall? No.

So why not give Trump his wall in exchange for something they want? They could give Trump the $5 billion he is asking for to begin construction of the wall, in exchange for a path to citizenship for the nearly 2 million "dreamers" -- illegal immigrants who were brought to the United States as children through no fault of their own. Trump would negotiate on this basis in a heartbeat.

Then, when Democrats take the majority next year, they could offer him the remaining $15 billion to $20 billion he needs to finish the wall, in exchange for legal status for the other 11 million people here in the country illegally. The wall could buy legal status for every illegal immigrant living in the shadows -- a longtime Democratic priority.

Again, Trump would likely be willing to cut such a deal. He is on record repeatedly saying that he wants to find a way for the vast majority of illegal immigrants (the "good ones," he calls them) to get right with the law and secure legal status, so long as we get rid of the rapists, murderers and drug dealers (aka the "bad ones") and secure the border. That is what Democrats claim they want to do as well. So take him up on it.

Or, if they don't want to use their leverage to solve the illegal immigration problem, then Democrats could use the wall as leverage to win concessions from Trump on something else. Democrats have laid out an ambitious agenda -- from shoring up Obamacare, lowering the cost of prescription drugs and Medicare-for-all to modifying Trump's tax cuts, increasing the minimum wage, strengthening environmental rules, tackling global climate change and enacting paid family leave. The possibilities are endless. If Democrats don't use the wall as leverage, they won't get any of this.

In their Oval Office meeting, Schumer told Trump that "elections have consequences" -- echoing the infamous words spoken by Obama to congressional Republicans in 2009 when they presented him with their ideas for a stimulus package. Back then, however, Democrats controlled not just the House but the Senate and White House, too. Today, Republicans control the executive branch and have an expanded Senate majority. So if Democrats want to get anything done, they can't ram it through over GOP objections, because Trump has leverage, too -- in the form of a pen he can use to sign or veto legislation. To get anything done, Democrats have to negotiate -- and compromise.

The answer for Democrats is simple: Don't refuse the wall; use the wall.