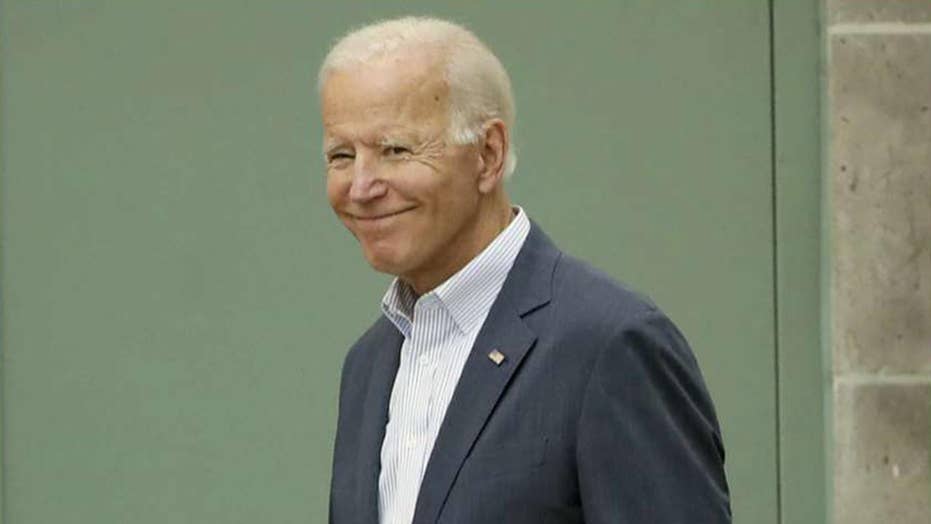 The trajectory of Joe Biden's presidential campaign is not going in the right direction, says Bret Baier, anchor of 'Special Report.'

Former Vice President Joe Biden has said that in holding up vital military assistance to Ukraine, President Trump “used the power and resources of the United States to pressure a sovereign nation, a partner that is still under direct assault from Russia … to subvert the rule of law in the express hope of extracting a political favor.”

That’s rich. The aid in question is lethal military assistance that the Obama-Biden administration refused to give Ukraine.

In 2014, after Russia annexed Crimea and began arming separatists in eastern Ukraine with tanks, armored vehicles and rocket launchers, Ukrainian President Petro Poroshenko came to Washington to plead for weapons to defend his country. In an impassioned address to a joint session of Congress — with Biden sitting directly behind him — Poroshenko said his country appreciated the nonlethal assistance he was getting, but declared “one cannot win a war with blankets.”

The Obama-Biden administration was unmoved. The Wall Street Journal reported at the time that “President Barack Obama stuck to his refusal to provide weapons or other lethal military gear to Ukraine, despite a passionate appeal Thursday for help in fighting pro-Russian rebels by Ukraine’s president.” Why? The administration feared that lethal aid would provoke Moscow.

So what did the administration give him? Instead of RPGs (rocket-propelled grenades), we provided MREs (meals ready to eat) — food rations. As one frustrated former Pentagon official put it at the time, “What kind of message does that send anyway? We are sending MREs while they are being invaded by an aggressor.”

Answer: a message of weakness.

When Trump took office, he delivered a message of strength. In December 2017, the new administration announced that the United States would send the lethal aid to Ukraine that Poroshenko requested and Obama and Biden refused — the sale of $47 million worth of Javelin antitank missiles. In May 2018, after Ukraine tested its new Javelin missiles, Poroshenko exulted on Twitter, “Finally this day has come!” and personally thanked Trump “for supporting Ukraine and adopting a decision to provide Javelin antitank missile systems.”

For Biden to now attack Trump for a temporary delay in a new round of lethal military aid reeks of hypocrisy. It was on Biden’s watch that the United States refused to deliver military aid at all. Yet the same vice president who sat there impassively while Ukraine’s president begged for weapons now dares to cite the Russian threat to Ukraine in castigating Trump? Talk about chutzpah.

And since Biden raised the Russian threat, let’s recall that the Obama-Biden administration bears much responsibility for the annexation of Crimea that necessitated the delivery of lethal aid to Ukraine in the first place. Russia’s military intervention in Ukraine came in the aftermath of the Obama-Biden administration’s failure to enforce its red line against Bashar Assad’s use of chemical weapons by Syria. In March 2013, Biden declared, “Because we recognize the great danger Assad’s chemical and biological arsenals pose to Israel and the United States, to the whole world, we’ve set a clear red line against the use or the transfer of those weapons.”

Assad responded by using chemical weapons on innocent civilians not once, but 16 times. And yet Obama and Biden did nothing, failing to carry out even “unbelievably small” military strikes — a decision Biden publicly defended. “We can easily say we should have bombed and gone in and taken out their air defense system,” Biden said, “Well, you know, big nations can’t bluff.”

Bluff is what Obama and Biden did — and Assad called their bluff. Not only that, they turned to Russia for a face-saving way out, letting Russian President Vladimir Putin broker a phony deal to have Syria disarm. It was one of the most embarrassing foreign policy debacles of the post-Cold War era. So it should come as no surprise that, when Obama threatened to impose costs on Putin if he invaded Ukraine, the Kremlin called his bluff, too. Putin knew Obama and Biden did not have the will to stand up to him in Ukraine. And he was proved right when they refused to give Ukraine lethal aid for fear of further provoking him.

None of this excuses Trump’s delaying a new round of lethal military aid to Ukraine. But if this military assistance was as vital to countering the Russian threat as Biden says, then it’s fair to ask: Why didn’t the United States provide it when Biden was the Obama administration’s point man on Ukraine?