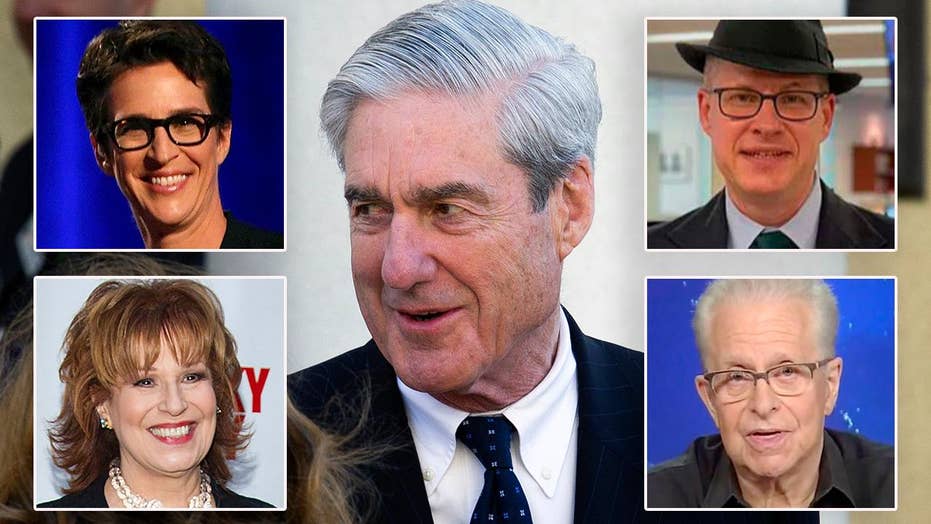 'Mueller Madness' bracket picks who was most wrong on Russia probe

The New York Post is asking for votes in their 'Mueller Madness' bracket featuring network, cable, print and Twitter personalities.

Special Counsel Robert Mueller’s finding that President Trump and his campaign didn’t collude with Russia to win the 2016 presidential election shouldn’t have come as a surprise – although it has for many on the left and in the media.

In particular, there were the five instances that should have made it clear to everyone following news about the Mueller probe that President Trump was telling the truth when he repeatedly said “there was no collusion.”

We should have believed the president.

DEMS WON’T TAKE NO COLLUSION FOR AN ANSWER, SEEK MUELLER EVIDENCE AND MORE

Yet the Mueller investigation dragged on and on for nearly two years, unforgivably holding the presidency hostage and distracting the American people from far more important national and international issues facing our country.

Before listing the five moments that should have alerted us all that there was no Trump-Russia collusion, it’s worth noting that many Democrats aren’t satisfied with the results of Mueller’s investigation – because they didn’t get what they wanted.

The Democrats are demanding, in effect, that Mueller keep looking and looking until he can find a needle in the haystack – even if there is no needle.

In fact, despite Mueller’s finding, a new Reuters/Ipsos poll – conducted after Attorney General William Barr issued a four-page summary of Mueller’s conclusions Sunday – found that 48 percent of all Americans believe Trump colluded with Russia to get elected. It’s logical to assume that most of those people are Democrats.

The Democrats wanted Mueller to report that there was Trump-Russia collusion and that the president engaged in obstruction of justice to try to interfere with the Mueller investigation.

While clearing Trump on collusion claims, Mueller didn’t draw a conclusion on obstruction allegations. However, in his letter to Congress summarizing the Mueller report, Barr wrote: “Deputy Attorney General Rod Rosenstein and I have concluded that the evidence developed during the Special Counsel’s investigation is not sufficient to establish that the President committed an obstruction-of-justice offense.”

In other words, case closed. Time to move on. That’s clearly the right thing for our nation. Democrats should put country over party and stop their nonstop political war on the president.

The Democrats are demanding, in effect, that Mueller keep looking and looking until he can find a needle in the haystack – even if there is no needle. And the Democrats who control the House of Representatives want to launch their own investigations of the president, apparently looking at every aspect of his long career in business and his personal life on a massive fishing expedition.

But back to the false collusion claims. Here are the five moments that should have tipped us off that Trump’s “no collusion” statement was right all along.

WOLF BLITZER: The last time we spoke, senator, I asked you if you had actually seen evidence of collusion between the Trump campaign and the Russians, and you said to me -- and I am quoting you now – you said, “not at this time.” Has anything changed since we spoke last?

BLITZER: But, I just want to be precise, senator. In all of the – you have had access from the Intelligence Committee, from the Judiciary Committee, all of the access you have had to very sensitive information – so far you have not seen any evidence of collusion, is that right?

FEINSTEIN: Well, evidence that would establish that there's collusion. There are all kinds of rumors around, there are newspaper stories, but that's not necessarily evidence.

Blitzer hit the nail on the head. Feinstein was on key committees that gave her access to intelligence information. The fact that she didn’t have any such information 10 months after the FBI began an intelligence operation to look at possible links between the Trump campaign and Russia was more than telling.

May 30, 2017:  Former Director of National Intelligence James Clapper said on CNN that there was "no direct evidence of political collusion."  Clapper also said “we didn't know that, or at least I didn't, when I left the government on the 20th of January.”

That was perhaps the most telling statement of all. Clapper was the top intelligence official in the country. The “intelligence” operation into the Trump campaign started in the summer of 2016. That gave Clapper seven months of access to the most sensitive information into the collusion claims before he left his government post.

The fact that Clapper had no proof was itself proof that Trump-Russia collusion never occurred. Neither Clapper nor former CIA Director John Brennan – both avowed anti-Trumpers – ever identified any facts indicating collusion. If they had any such information they would have leaked or disclosed it long ago, given their hatred for Trump.

Strzok told Page that "you and I both know the odds are nothing. If I thought it was likely, I’d be there no question. I hesitate in part because of my gut sense and concern there’s no big there."  Page affirmed the same in testimony.

This made it more than evident there was never going to be anything there.

Roger Stone was all but the last straw in the realm of collusion possibility.

Cohen, who said far more than any attorney ever should about a client under any circumstances, as I have previously written, threw the last of cold water on the collusion speculation when he testified

"I wouldn’t use the word 'colluding'," Cohen said. "Was there something odd about the back-and-forth praise with President Putin? Yes, but I’m not really sure I can answer that question in terms of collusion."

Cohen also debunked the claim he was in “Prague, Czech Republic, in 2016 to help secure a Trump election win.”

These five major moments all lead to the same conclusion – there was no collusion. The truth was in plain sight.

What about members of the Trump family? Were any of them colluding with Russia? Again, the facts fail to support that claim.

That leaves only Donald Trump as a possible colluder. But candidates for president barely have time in the day to take care of themselves, let alone conduct clandestine conspiracies. And Mueller’s long investigation looked long and hard but couldn’t support the false claim the president worked with Russia to get into the Oval Office.

The bottom line is that despite many on the left and in the media cheerleading for it, no collusion occurred. That was apparent from the beginning, No one should be surprised that Mueller didn’t fiund it either.