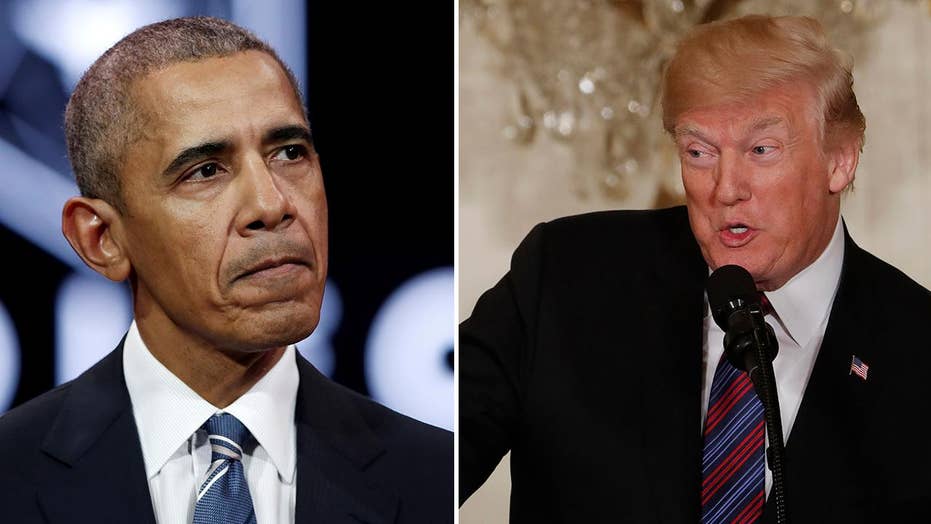 Trump approval numbers are higher than Obama’s were in 2010

What will it take for Democrats to get on board with what the American people want? Republican strategist Ned Ryun speaks out on 'Fox & Friends First.'

In 2010, as President Obama’s popularity spiraled downward, Jeff Greenfield wrote for CBS News that “historically, no president in modern times has significantly improved his approval numbers in his second year.” Don’t look now, but some polls show President Trump is doing just that.

In the second year of his presidency, President Trump’s approval ratings are climbing, to the utter horror of liberals, who cannot for the life of them understand why.

Some 51 percent of the country now supports the president, according to the Rasmussen poll – up from 42 percent a year ago.

President Obama, at the same date, had 47 percent of the country behind him, down from 57 percent the year earlier.

Democrats wonder, how on Earth can Trump be gaining ground?

Here’s a clue: real growth is running above 3 percent, unemployment claims are the lowest since 1969, wage growth is the best since 2009 and Americans are more optimistic than they have been since 2004.

These are stunning stats, but just as important is this: many Americans think the president is trying to do the right thing. They view him as confronting a hostile media and an entrenched bureaucracy. And on numerous policy issues – like immigration, gun control and trade with China – President Trump is in synch with most Americans.

The same cannot be said for progressive Democrats or, for that matter, many of the Freedom Caucus very conservative types.

How do we know? Polling on the “direction of the country” indicates that Americans are more positive on what’s going on in the United States than they have been since 2009.

Meanwhile, approval ratings for Congress show it surely isn’t our legislators who are getting credit for the positive trend.

The president has long called out media bias; the public is beginning to agree with him. In a recent Gallup survey, nearly half the country thinks that there is a “great deal” of political bias in our news coverage, up from 37 percent in 2012.

A new Rasmussen poll finds that 52 percent of likely U.S. voters believe “when most reporters write or talk about the president, they are trying to block him from passing his agenda,” up from 44 percent a year ago and 47 percent in August.

This is why President Trump calls out the media at every opportunity. Not only is he right, it makes him an underdog, and Americans love underdogs.

On immigration, the president, like most of the country, supports a path to legal status for the so-called Dreamers, but also favors tightening our borders.  A huge majority of the country agrees, with both those opinions.

The left has become untethered on this topic, increasingly equating legal and illegal immigration. Democratic National Committee Chairman Tom Perez says that asking about citizenship on the U.S. census form is a "craven attack on our democracy." He’s got it exactly backwards; sending legislators to Congress to represent people who are in the country illegally is an attack on our democracy, and most Americans agree.

Gun control is another issue on which the president has veered towards the popular middle, demanding that his administration produce a rule banning bump stocks, for instance.

President Trump’s open White House meeting after the Parkland shootings shocked the political establishment, as the president called out his GOP colleagues for being in thrall to the National Rifle Association and proposed expanded background checks as well as other controversial measures. Though he later walked back his endorsement of further gun controls, he left no doubt that he was behind commonsense reforms, even if political necessity required a more tempered approach.

It appears that President Trump’s efforts to confront China have widespread appeal, and not just in the rust belt.

Pew Research reports that Americans’ view of China has deteriorated in recent years, with more than half the country having an unfavorable view of the world’s second-largest economy and, as of last year, 65 percent saying that China is either an adversary or a serious problem. Moreover, the president has the support of businesses operating in China, which have been on the front lines of China’s unfair trade practices and discriminatory rulings.

As many Americans applaud President Trump for his hard line on China or efforts to resolve the DACA issue, they see him hamstrung by unceasing Democratic resistance and a lack of cooperation even from some GOP members of Congress.

But that’s not the only reason that President Trump’s popularity may be inching higher. Unlike President Obama, President Trump did not enter the Oval Office burdened by high expectations.

In describing President Obama’s tough first year, in which he “suffered the steepest decline in job approval of any first year president since they started keeping such data,” Greenfield suggested that the drop was because Obama’s fans were overly optimistic. People expected too much and “more important, he did not come to office with a strong sense of where he was going.”

That is not the case with President Trump. He ran on boosting job creation through lower taxes and lighter regulation, and on making the country more secure. Whether it’s demanding fairer trade with China, tightening our control of our border or passing a big hike in defense spending, his agenda is surprisingly consistent for a man often guided by impulse.

Maybe the increase in approval comes from a much simpler place: President Trump is doing what he promised he would.