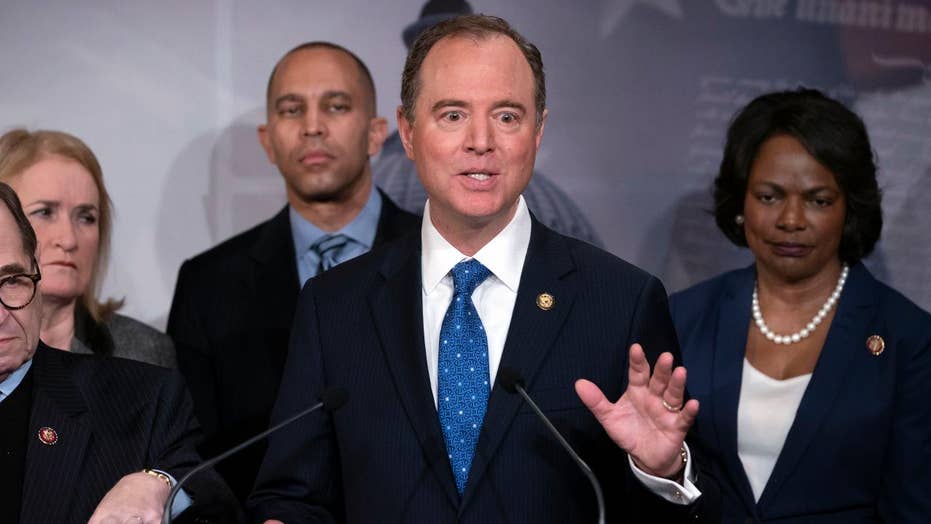 As lead impeachment manager presenting the House’s case to the Senate, Schiff managed to offend senators in the chamber, insult voters and, when it was clear his endless hours of presentations had failed to harness GOP votes or alter public opinion, descend into hysterical hyperbole. It was quite the hat trick.

Schiff impugned the integrity of GOP senators, saying they had been warned that if they voted with Democrats their “head(s) will be on a pike,” hinting that they were subject to political blackmail. Angry Republicans protested it was not true, causing Schiff to backpedal, but the damage was done.

The California Democrat also managed to disparage voters, saying “the president’s misconduct cannot be decided at the ballot box, for we cannot be assured that the vote will be fairly won.” He thinks impeachment is essential because Americans are too stupid to judge the president’s conduct.

Last but not least, Schiff resorted to fear-mongering, suggesting that Trump’s delay of aid to Ukraine endangered our national security, saying it meant “that we can fight Russia over there, and we don't have to fight Russia here…” The statement was widely mocked on social media; as Rep. Jim Jordan, R-Ohio, said, “Trump gave them missiles, Obama gave them blankets.”

As they began their defense of the president, Trump’s legal team presented actual facts that refuted accusations of wrongdoing, drawing a vivid contrast to the Democrats’ reliance on hearsay and on Gordon Sondland’s “presumptions.” The lawyers noted, for example, that President Trump had on several occasions held up aid to foreign countries, rebutting claims that doing so in Ukraine was unprecedented and therefore suspicious.

In addition, Trump’s lawyers focused on the credibility of Adam Schiff. This is, after all, the same Adam Schiff who claimed on several occasions to have “direct” and “ample” evidence of collusion between the Trump campaign and Russia. It was not true; there was no collusion and therefore no evidence.

Schiff also misrepresented his connections to the whistleblower, pretending not to know the identity of the individual who started the impeachment ball rolling even as it turned out his office had been in contact with that person. That deceit tainted the entire proceeding, reviving memories of the coordinated and dishonest behind-the-scenes attack on Supreme Court Justice Brett Kavanaugh.

Schiff at various times misrepresented the testimony heard during the House investigation, such as when he asserted that several officials listening to Trump’s July 25 phone call with Ukrainian President   Zelensky “came forward in real time to report the president’s conduct.” He singled out Tim Morrison, a former member of the White House National Security Council, but the transcript of Morrison’s testimony reveals he saw nothing inappropriate about the call.

House Speaker Nancy Pelosi allowed one of the most partisan members of her caucus to act as ringmaster to the circus; all that was missing was the red coat.

You have to ask: why on earth did Democrats make showboating Adam Schiff the face of their impeachment effort?  Over the past few years, his hostility to the president has made the partisan congressman widely reviled and distrusted by Republicans; that antagonism weakened from the outset any claims that the House investigations or Senate trial would be fair. His secret hearings and orchestrated leaks confirmed he could not be trusted.

Moreover, it was clear his House investigation had failed to win over the public. Enthusiasm for impeachment slumped during Schiff’s presentation in the House, with the RealClearPolitics average of polls showing those in favor at 51 percent of respondents before the House push got underway and dropping to 48 percent as it wrapped up. Those opposed jumped from 42 percent to 45 percent. The public didn’t buy what Schiff was selling.

The House undertaking was so limp and unsuccessful that Schiff actually dithered over whether Democrats should take an impeachment vote, telling an astonished Jake Tapper on CNN that he wanted to “discuss this with my constituents and colleagues before I make a final judgment on this.”

The Senate trial has similarly failed. A new Washington Post/ABC News poll finds a plurality of voters (49 percent) are against removing the president from office while only 47 percent favor impeachment.

At the same time, the poll reveals that Trump’s approval rating is now at the highest level of his presidency. Perhaps more significant: 47 percent of independents now give the president a thumbs-up, up from 38 percent in October.

Those are remarkable findings in the midst of an impeachment trial, but not surprising given who has led the charge.

House Speaker Nancy Pelosi knew the stakes, and for many months resisted pressure from the progressive hounds baying for Trump’s blood. Forced into impeachment, she has tried to travel the high road, on many occasions insisting that her party has undertaken this quest solemnly and sadly, even as she giddily handed out signature pens.

Nonetheless, and contrary to her past insistence that impeachment should be bipartisan, Pelosi allowed one of the most partisan members of her caucus to act as ringmaster to the circus; all that was missing was the red coat.

Impeachment is a political act. Success is not necessarily defined by the outcome, but rather by the impact on public opinion. Though various polls have shown that Democrats have brought their own party along on this journey, they also confirm they have failed to attract the backing of millions of independents, and have only hardened Republican support for the president.

The most compelling argument against impeachment is that we are but months away from a presidential election. Instead of trying to eject President Trump from office through skimpy charges and partisan hearings, Democrats should offer up a candidate who can beat him in November.

That, of course, is their problem. So far, that candidate has not emerged.