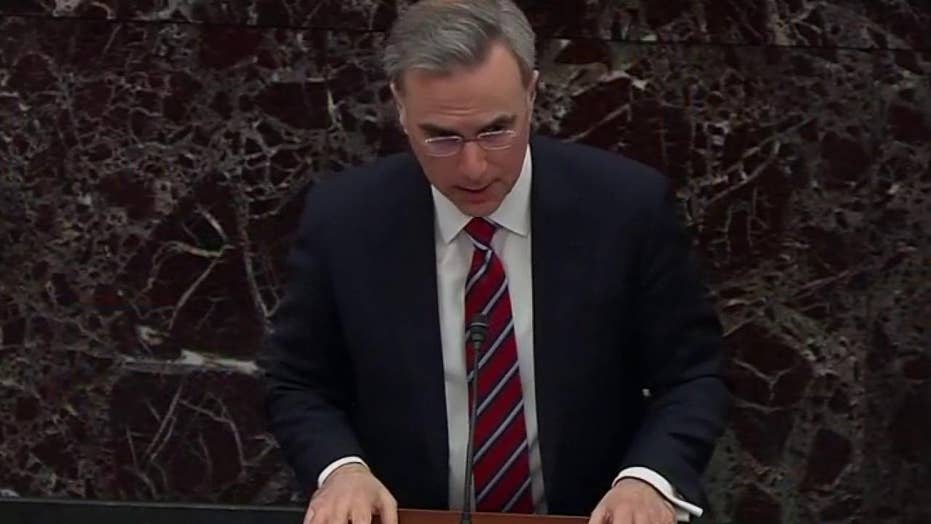 “The Titanic” was the longest feature film ever produced. It has been surpassed with the debut of the 36-hour-opening argument for impeachment produced by Rep. Adam Schiff, D-Calif.

"The Titanic" played to a larger and more enthusiastic audience.

We all knew how it would turn out. The ship sunk. Even Schiff admitted he knows how this impeachment is coming out. Trump gets acquitted.

So how much is enough? Relentless attempts to go after Trump’s finances have had no end. The Mueller report and Trump-Russia collusion theory lived on for years through a $32 million investigation. Now, after holding up the entire government for months with this impeachment, Schiff’s team wants the Senate to consider new witnesses and documents.

Tying up the entire government for an impeachment to nowhere is an unproductive exercise in political rage, not a solemn constitutional duty. It’s time to bring an end to this movie and let America hold an election.

Each side has made its key points. Schiff and his team have convincingly shown that President Trump and his personal lawyer wanted Ukraine to investigate the Bidens and maneuvered in various ways to get this done.

Democrats have put a huge flashlight on it, but at the end of the day, U.S. aid to Ukraine was delivered. No investigation was initiated, and Ukraine’s administration said it was never pressured. Schiff has had weeks and months to pound away and make Democrats’ case on their terms.

On the other side, Trump and his personal attorney, Rudy Giuliani, have raised questions about how and why Hunter Biden received millions of dollars for a job he was unqualified for and was hired after his father -- former Vice President Joe Biden --  took on the position of heading Ukraine policy for the Obama administration. Most voters think this raises serious questions worth further investigation. It is also clear that Joe Biden vehemently denies any connection between his actions and these payments, and that no connection has been established.

So here we sit at the precipice of extending this drama. For the record, I opposed the impeachment of President Clinton as nothing more than the politics of personal destruction. My views are not about party or partisanship. They are based on a firm belief that impeachments need to be based on true bipartisanship. Otherwise, they have no place in our democracy.

We are all better off wrapping this impeachment up. The circumstances in question just don’t rise to the level of an impeachable event, no matter how many times they are repeated.

Asking for an investigation of individuals who once held elected office on the basis of well-known facts may be poor judgment, but it is not criminal. Exerting executive privilege, as almost all prior administrations have done, does not equate to obstructing Congress.

Remarkably, it is the Trump administration providing military aid to Ukraine. The Obama administration did nothing to repel Russia, and it only provided non-lethal aid. Some of the impeachment managers even voted against providing aid. There is no current threat to national security, our democracy or any urgent matter reflected in these events.

And the impeachment prosecutors have undone themselves with overreach — they know they ran a completely rushed and partisan process in the House. They could have fought for more witnesses and gone through a proper court process, but they didn’t. They called all of the senators who disagree with them (and who would be making the same judgments they did) participants in a “cover-up.” Trump was repeatedly called a “dictator,” and then in closing, Schiff fabricated supposed threats from the president.

It boggles the mind that the leader of the House prosecution has repeatedly been exposed as peddling falsehoods. It seems to be what qualified him for his job. While complaining about Trump wanting Biden investigated, Schiff was caught on tape soliciting naked pictures of the president from allegedly foreign pranksters.

It has always been about just one more witness. During the investigation by Special Counsel Robert Mueller, a world-famous journalist told me Mueller had a secret witness who was “telling all.” There was no such witness.

The Foreign Intelligence Surveillance Court and the Justice Department have finally concluded the obvious — there was no valid basis for granting continued surveillance of former Trump presidential campaign adviser Carter Page.

It is time for the country to move forward. More witnesses would only tie up the Senate and the country further. This is all proper fodder for the election, not for three-day political ads at taxpayer expense.

It’s time to let the focus shine on the Democratic challengers who want to run against Trump in the November election. They should be out on the stump, not sitting in the Senate. Let them take the stage and make their case. And let the people decide.