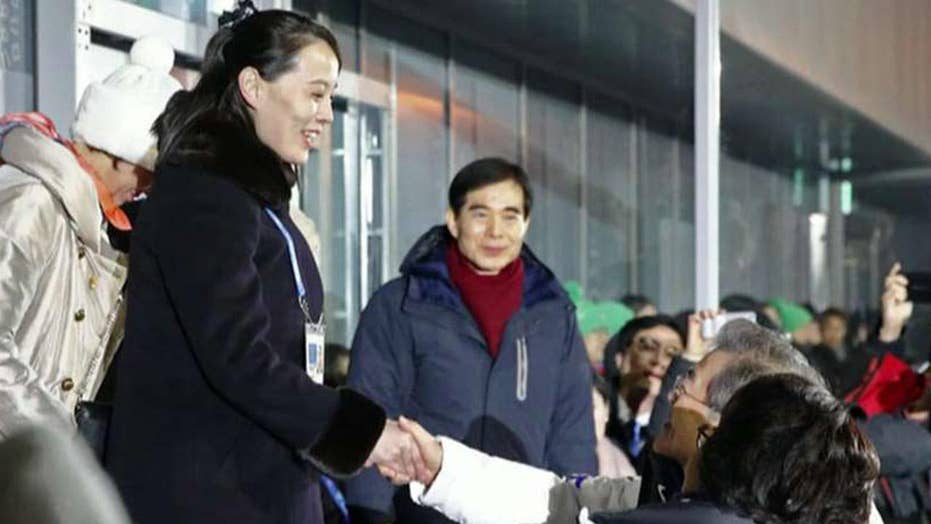 WASHINGTON -- Watching the media fawning over the North Korean delegation at the Pyeongchang Olympics, I recalled a picture that my old boss, Secretary of Defense Donald Rumsfeld, kept under the glass of a table in his office -- a satellite photo of the Korean Peninsula at night. At the bottom, awash in light, is the free and democratic South. Meanwhile, the North is in complete darkness, save for a tiny pinprick of light in Pyongyang. The two countries, Rumsfeld would often point out, have the same people and the same natural resources. Yet one is glowing with the light of freedom, innovation and enterprise, while the other is enveloped in the total darkness of human misery.

Keep that darkness in mind while watching the North's Olympic charm offensive over these two weeks. Kim Yo Jong, the sister of Kim Jong Un, is not the "North Korean Ivanka." She is the vice director of the Propaganda and Agitation Department, a senior leader of the most brutal repressive totalitarian regime on the face of the Earth. As one defector told The Washington Post last year, "It's like a religion. From birth, you learn about the Kim family, learn that they are gods, that you must be absolutely obedient to the Kim family."

Any perceived disloyalty to the Kim family can result in a visit in the middle of the night from the Bowibu -- the North Korean secret police -- that could send not just the offender, but three generations of his or her relatives, to a forced labor camp for life. North Korea's system of "re-education" camps, which was recently mapped by satellite by the Committee for Human Rights in North Korea, is the most extensive in the world. Under three generations of Kims, hundreds of thousands, if not millions, have been imprisoned and killed in these camps. Inmates undergo the most brutal forms of torture imaginable, including being hung on hooks over open fires, while pregnant women are tied to trees while their babies are cut out of their bellies.

Yet the camps are simply prisons within a larger prison. The entire country is one giant gulag. Thanks to widespread malnutrition, North Koreans are between 1.2 and 3.1 inches shorter than South Koreans. And thanks to economic mismanagement, 97 percent of the roads are unpaved. According to my American Enterprise Institute colleague, Nicholas Eberstadt, up to a million North Koreans died of starvation in the famine that followed the collapse of the Soviet Union. "It was the only time in history that people have starved en masse in an urbanized, literate society during peacetime," he notes. North Korea's people starve while the regime pours its resources into its messianic quest to deploy nuclear missiles capable of reaching and destroying American cities.

Even among the elites there is no safety. Last year, North Korea's vice premier for education was executed for not keeping his posture upright at a public event. Defense Minister Hyong Yong Chol was pounded to death with artillery fire for the crime of falling asleep at a parade. And if you wonder why those North Korean cheerleaders stay in such perfect sync, maybe it's because they saw 11 North Korean musicians lashed to the barrels of anti-aircraft guns which were fired one by one before a crowd of 10,000 spectators. "The musicians just disappeared each time the guns were fired into them," one witness declared, "Their bodies were blown to bits, totally destroyed, blood and bits flying everywhere. And then, after that, military tanks moved in and they ran over the bits on the ground where the remains lay."

This is the brutality that Kim Yo Jong represents. Yet despite this cruel reality, the media could not help fawning over the North Korean delegation. Reuters declared Kim Yo Jong the "winner of diplomatic gold at Olympics." CNN gushed how, "With a smile, a handshake and a warm message in South Korea's presidential guest book, Kim Yo Jong has struck a chord with the public." NBC even tweeted a photo of the North Korean cheerleaders with the heading "This is so satisfying to watch." Seriously? NBC failed to mention that in 2005, 21 cheerleaders were sent to a prison camp for speaking about what they saw in South Korea.

Instead of normalizing the regime, this should be an opportunity to educate the massive Olympic audience about the realities of life in North Korea under the murderous Kim crime family that is pursuing the ability to threaten American cities with nuclear destruction.