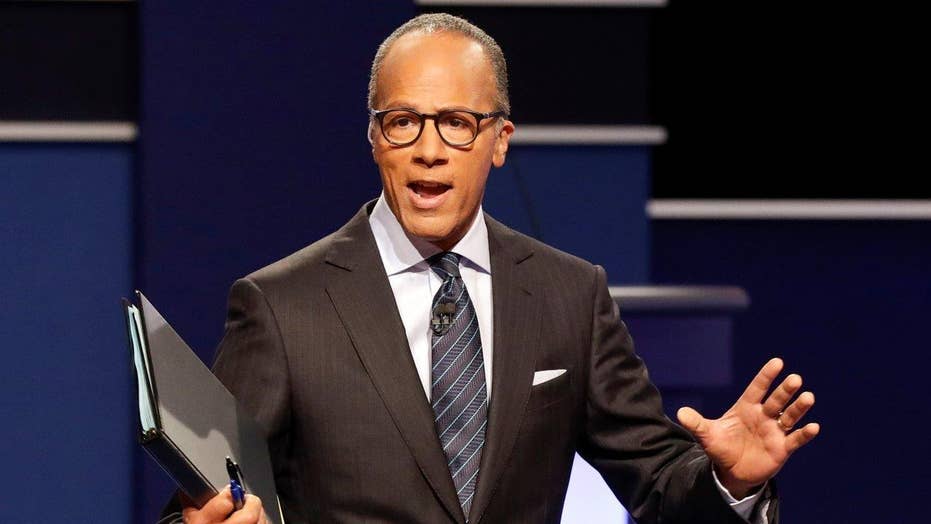 Some critics say he didn't grill Clinton as thoroughly as he did Trump, others argue he lost control of the debate. The Hill columnist Joe Concha goes 'On the Record' with his analysis

Journalists got their wish. Presidential debate moderator Lester Holt hoisted Hillary Clinton’s campaign high in the air like Atlas. Holt repeatedly called out Trump, as both the Clinton campaign and the liberal media had begged him to do.

Holt reminded viewers he’s liberal – from pushing the birther issue to harassing Trump about his tax returns to a wildly biased question about Clinton as “the first woman nominated by a party” not having “the look.” Clinton skated by with a 15-second response on her emails while Trump was asked repeated follow-up questions while Hillary was not. There was no “deplorables” question and Holt promoted the birther meme without noting its origin in the Clinton camp.

Clinton discussed fact-checking three times, even imploring her media friends: “Well, I hope the fact checkers are turning up the volume and really working hard.” Holt sure was. He dragged the debate to the left in six major ways:

1. Jobs: Holt pressed Trump with two questions on how he was going to add jobs even though the first answer discussed renegotiating trade deals.

2. Taxes: He portrayed the tax plans from the left – Clinton wanting to tax the rich and Trump “calling for tax cuts for the wealthy,” forcing Trump to correct him.

4. Birthers: Holt asked a “birther” question that lasted longer than Clinton’s email answer. He then added three separate follow-ups to jam up Trump.

5. Iraq: He hammered Trump for supporting the Iraq War, downplaying how Hillary had voted to do the same.

6. Hillary’s Gaffe: When asked about biased policing, Clinton said, “I think implicit bias is a problem for everyone, not just police.” Holt ignored it, rather than challenge the idea everyone is bigoted.

The New York Times said Holt “Opted for Restraint,” and called him a “minimalist moderator.” The paper liked some of Holt’s approach, given the “news media tempest over how aggressively a moderator should fact check candidates.” Still, the Times called it “a split decision” for Holt.

The news media have been shouting “fact check” in desperate cries for relevance. More than a dozen outlets fact-checked the debate as a result. CNN "Reliable Sources" host Brian Stelter, also formerly of the Times, focused on the fact-check strategy to target Trump during his Sunday show. “Does a unique candidate like Donald Trump require a different kind of moderating?” he asked a guest before being told, “No, no absolutely not,” by long-time debate moderator Jim Lehrer.

Bloomberg TV, owned by left-wing media baron Michael Bloomberg, ran on-screen fact checks for its tiny audience. The Times “assembled a team of 18 fact-checkers,” generating a 2,400-word fact-check. The paper even had a correspondent “watching for gender moments.”

The paper pushed hard for fact-checking while it pushed hard for Clinton. Its official endorsement dropped one day before the debate – as certain as death and taxes. It’s opinion page Twitter account oozed pro-Hillary headlines during the debate, such as: “What a fantastic moment, to see Donald Trump self-destruct.”

Journalists have demanded their industry give up neutrality throughout the campaign. It’s a laughable conceit for anyone who recalls Candy Crowley’s 2012 bias or the 2016 CNBC GOP primary debate. Univision anchor Jorge Ramos turned from journalist to crusader with barely any professional criticism. Reporters might as well wear blue jerseys with “I’m With Her” on the back.

Back in August, Times media columnist Jim Rutenberg argued the paper had to sacrifice its alleged neutrality. If you think “Donald J. Trump is a demagogue playing to the nation’s worst racist and nationalistic tendencies,” then “you have to throw out the textbook American journalism,” he wrote.

Journalists have skewered anyone soft on Trump. NBC' the "Today" show’s Matt Lauer faced a “Storm of Criticism Over Clinton-Trump Forum” because he didn’t play the fact-check game. Even "Tonight Show" host Jimmy Fallon was bashed for mussing Trump’s hair instead of smacking him upside the head.