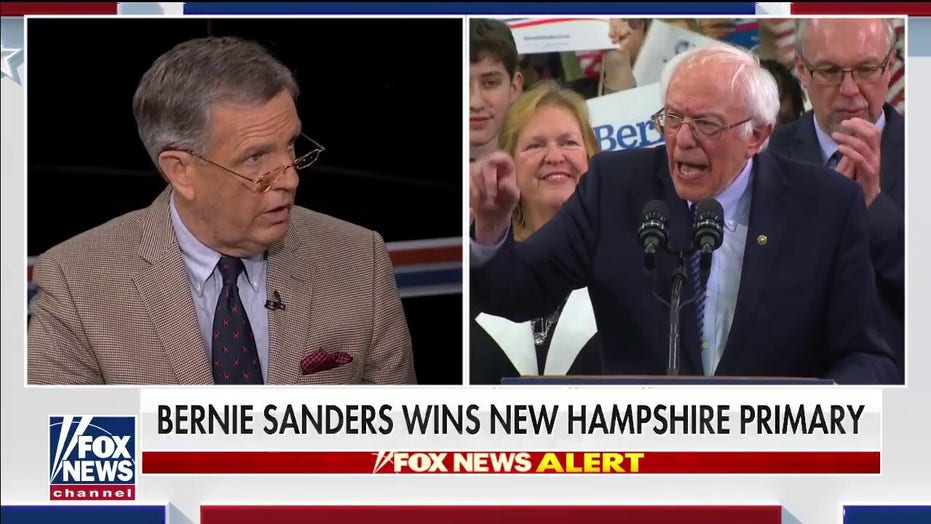 Brit Hume: Not a great night for Sanders despite New Hampshire victory

Here are my 10 takeaways from the New Hampshire Democratic primary, which Sen. Bernie Sanders, I-Vt., narrowly won with almost 26 percent of the vote, followed closely by former South Bend, Ind., Mayor Pete Buttigieg in second-place with just over 24 percent, with 87 percent of precincts reporting.

Sen. Amy Klobuchar of Minnesota came in a strong third with almost 20 percent, while Sen. Elizabeth Warren of Massachusetts trailed at a distant fourth with just over 9 percent. Former Vice President Joe Biden was in fifth place with just over 8 percent. No other candidate managed to reach even 4 percent of the vote.

ONE: Polls can be reliable

Most polls – especially the most recent polls – showed Sanders leading or winning in New Hampshire. The polls were accurate, though Buttigieg came close to scoring an upset.

Entrepreneur Andrew Yang and Sen. Michael Bennet of Colorado dropped out of the race for the Democratic presidential nomination, but nine candidates remain in a field that once had over two dozen presidential hopefuls.

While some candidates at the back of the pack have virtually no chance of winning their party’s nomination, I wouldn’t count out Warren and Biden. I agree with their decision to stay in the race.

As Biden said: "It ain't over man, we're just getting started.”

The Iowa caucuses and the New Hampshire primary are important because they are the first two nominating contests. But the two states have small populations with few African-American and Hispanic voters. The next two nominating contests – in Nevada Feb. 22 and South Carolina Feb. 29 – are in states with much more diverse populations, where Biden, in particular, has enjoyed strong support.

But just because Biden is carrying on doesn’t mean he should carry on this campaign the same way. Something has to change.

Biden has to step up his game in the debates and reevaluate why he once topped the polls in Iowa and New Hampshire but then fell flat when voting was held.

The former vice president needs to change it up to get more people to come out and vote for him by getting them more excited about his candidacy. He can't just count on states like South Carolina with large minority populations.

Significantly, new polling shows former New York City Mayor Mike Bloomberg's is picking up support among African-Americans – a constituency that has been strongly supportive of Biden in earlier polls.

I have always maintained that endorsements don't really do much for campaigns, but boy, was I wrong this time around in New Hampshire. I’m specifically referring to the endorsements Sanders received from Democratic Reps. Alexandria Ocasio-Cortez of New York, Ilhan Omar of Minnesota and Rashida Tlaib of Michigan.

The endorsement of the three progressive freshmen congresswomen gave Sanders an important boost that contributed to his New Hampshire victory.

FOUR: The Democratic Party is divided

Among the top five candidates in the New Hampshire Democratic primary, Sanders and Warren competed in the progressive lane, together getting just over 35 percent of the vote.

Buttigieg, Klobuchar and Biden competed for the more moderate vote, and together captured almost 53 percent of the vote.

The remaining vote was split between candidates in the back of the pack.

Bloomberg – spending record amounts of his multibillion-dollar fortune on his campaign – wasn’t on the ballot in Iowa and New Hampshire but is campaigning and advertising heavily in Super Tuesday states.

New Hampshire used paper ballots. The primary went off without a hitch and results came in early – quite a contrast to the failure of new technology used to tabulate votes in the Iowa caucuses.

Apps and computers can be hacked and break down. That can’t happen with good old-fashioned paper ballots.

SIX: Warren made a mistake picking a fight with Sanders

Warren was leading in polls in New Hampshire just a few weeks ago. Then she started a feud with Sanders, claiming he had told her in private that a female candidate couldn’t defeat President Trump in the November election – a claim Sanders strongly denied.

The feud appears to have cost Warren votes – exactly the opposite effect she likely expected.

Warren’s poor showing in New Hampshire is especially embarrassing for her because her home state of Massachusetts borders New Hampshire and that should have given her a geographical advantage. Sanders is also from a neighboring state – Vermont.

In the New Hampshire primary, Sanders and Buttigieg each picked up nine delegates to the Democratic National Convention, while Klobuchar picked up six. No other Democratic picked up a single delegate. So while Sanders won slightly more popular votes, the contest was a draw between him and Buttigieg in the delegate count.

EIGHT: There was no surge in voter turnout

Polling showed that New Hampshire Democratic voters are angry and want the Democratic Party to nominate a candidate who can defeat President Trump in November.

But in Iowa and New Hampshire we didn’t see the record turnout for the Democratic caucuses and primaries that some had forecast.

Democrats will need a strong turnout of anti-Trump voters to have a chance of defeating him in the general election.

With the exception of Bloomberg, who hasn’t yet qualified for a presidential candidate debate and wasn’t on the ballot in Iowa and New Hampshire, candidates kept off the debate stage have fared poorly and many dropped out before voting in nominating contests began.

The televised debates give the candidates valuable exposure and boost their status as serious contenders.

Klobuchar had a breakout performance at the Democratic debate last week and that seems to have been a big factor that helped her vault past Biden and Warren in the New Hampshire primary.

Health care is a winning issue for Democrats. As President Trump and Republicans seek to constantly undo ObamaCare and have no alternative plan, this is an issue that still is strongly resonating with voters.

Polling shows that health care, followed by climate change, followed by the desire for a president who can unite our country are the three big concerns of many voters.