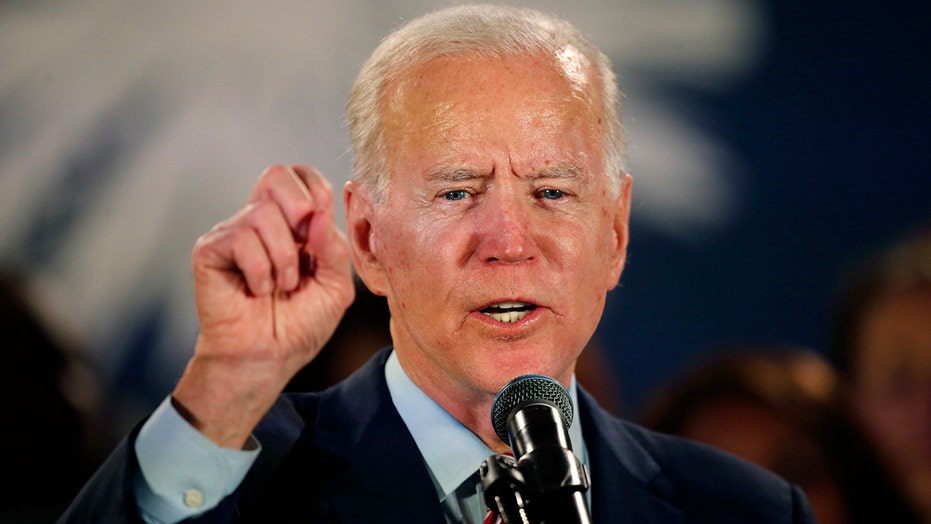 But the biggest winner in Tuesday's contest - the first primary in the White House race - may well be Sen. Amy Klobuchar of Minnesota, who came in a strong third. Klobuchar finished far ahead of Sen. Elizabeth Warren of Massachusetts and former Vice President Joe Biden, who are limping out of New Hampshire facing serious questions about the future of their campaigns.

THE VOTE COUNT IN NH'S DEMOCRATIC AND GOP PRESIDENTIAL PRIMARIES

Klobuchar - who hails from Iowa's neighbor to the north - finished a distant fifth in last week's Iowa caucuses. But a strong presidential primary debate performance on Friday seemingly pumped up her fortunes and gave her a big bounce - as she surged the final tracking polls over the weekend. The senator was obviously able to capitalize on her last-minute momentum.

"Man, were we at the debate in New Hampshire," she remarked in her primary night speech.

And speaking with reporters after her address -- Klobuchar predicted that "we are on the rise. This is just the beginning... Imagine what we'll do in Nevada."

Exit polls suggest that older and more educated voters, as well as moderates and those looking for a candidate to unite the country, boosted Klobuchar's performance.

"While most of the attention this week has been on Sanders and Buttigieg, the big story out of New Hampshire may just be Amy Klobuchar’s 3rd place finish," highlighted Lesperance, vice president of academic affairs at New England College.

Klobuchar now moves on with a ton of momentum and a likely boost in fundraising. Her campaign immediately went up with TV ads in Nevada.

Biden headed south on Tuesday, flying to South Carolina even before the polls closed in New Hampshire. The former vice president skipped out on his primary night celebration in the Granite State, which was sparsely attended. But he did tell the crowd, in a speech that was beamed in, that "we'll be back, New Hampshire, we'll be back in the general."

The abrupt decision to leave the state early was a stunning move for a candidate who late last year had vowed he'd win in New Hampshire. But for a week, Biden and his campaign had downplayed expectations in the first primary state.

Biden - at a campaign kick-off Tuesday night in Columbia, South Carolina, downplayed the results in Iowa and New Hampshire.

“It is important that Iowa and [New Hampshire] have spoken, but, look, we need to hear from Nevada and South Carolina and Super Tuesday and beyond,” Biden told a crowd of supporters.

President Trump's re-election campaign quickly spotlighted Biden's abysmal finish in the primary, writing in an email to reporters titled,  "Joe Biden Predicted He Would Win New Hampshire. He Just Got Beat Like a Drum—Again.... A crazy socialist and a former small town mayor just crushed the former VP"

Warren acknowledged her disappointing finish but told supporters on Tuesday night that "our campaign is built for the long haul" and that "we are just getting started."

Veteran Democratic strategist Michael Ceraso said that the Warren campaign's post-game spin is the losses in Iowa and New Hampshire are temporary set-backs. She's looking to rewrite what election history has taught us: losing early by substantive margins is very hard to overcome."

And Ceraso - a veteran of the 2016 Sanders campaign who served as Buttigieg's New Hampshire state director before parting ways with the campaign last summer - said that "Biden's team has gone through the campaign motions in Iowa and New Hampshire, and the results have been devastating for Biden. His team is relying on Obama nostalgia to get him through the next phase and I don't see it working."

He emphasized that "a fifth-place finish in New Hampshire puts a huge crack through Biden's electability argument, leading me to believe voters are going to ask, "who is the true alternative to Biden?"

Sanders thanked "the people of New Hampshire for a great victory tonight."

For the populist senator - it was a second straight win in New Hampshire's primary - following his 2016 crushing of eventual nominee Hillary Clinton.

While Sanders didn't exceed expectations, Democratic operative Chris Moyer stressed that "a win is a win and he's happy to take this win and move on claiming success in the first two states."

He and his team have to be feeling pretty good, even though the margins weren't as big as they would have liked," added Moyer, a veteran of Clinton's 2016 campaign and Sen. Cory Booker of New Jersey's 2020 presidential bid.

Buttigieg - once the longest of long-shots when he declared his candidacy a year ago, told his supporters that "a campaign that some say shouldn’t be here at all has shown that we are here to stay.”

And taking indirect aim at Sanders, he argued that the politics of “my way or the highway” is not the way to defeat President Trump.

Moyer said the Buttigieg "has done what he had to do in these first two states" but emphasized that "the challenge for him is now that the race moves to Nevada and South Carolina and beyond, how does he improve upon his support from voters of color...His mission now is going to be to expand his coalition."