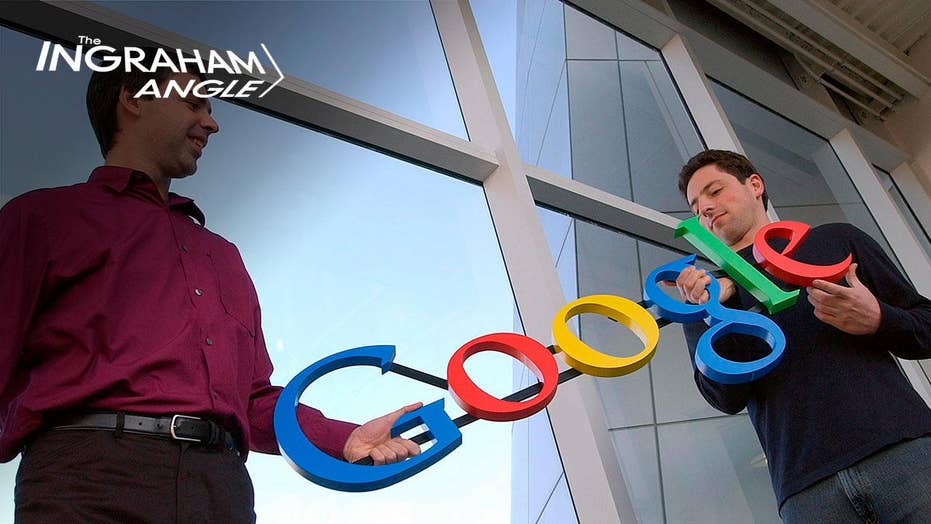 On Thursday, Laura Ingraham speaks on Google executives exposed in a leaked video sharing their feelings of despair after the election. Then, Laura speaks on the Democrats pathetic efforts to scuttle Brett Kavanagh nomination to the Supreme Court. Plus the latest updates on Hurricane Florence already leaving thousands without power.

Immediately following the election, Google executives gathered to share their feelings of dejection and despair. A video recently leaked to Breitbart reveals the mind-set of Google's leadership from within their corporate safe space.

This is co-founder Sergey Brin, “You know, let's face it, most people here are pretty upset and pretty sad because of the election. Anyway, on a more serious note, you know, myself, as an immigrant and a refugee, I certainly find this election deeply offensive and I know many of you do, too. And I think it's a very stressful time and it conflicts with many of our values.”

Values? What are those Google values? After all this is a company that has actively worked with the Chinese communist regime for years. And right now, Google is developing an app to screen out content that the Chinese government considers too sensitive for its citizens. Translation, Google is helping China silence its political opposition. The Chinese government, let's remember, imprisons dissidents and Christians daily.

They have more than a million Muslims in reeducation camps, but the legitimate election of President Trump, somehow conflicts with Google's vaunted values? Give me a break.

Thursday, we learned that a senior Google research scientist named Jack Paulson was so disgusted by the company's collaboration with Chinese sensors that he has quit in protest.

And I was thinking about this, you want to know the real reason that the Google execs were so exercised, so hurt by the election of Trump? Because he promised to hold Google's partner, China, accountable. To punish Chinese cheating on trade deals that hollowed out U.S. manufacturing. For Google and many other big manufacturers, the pre-Trump status quo was much easier.

Keep that production overseas, lower wages, no regulation, no health care that you have to worry about for those employees over in China. And if it hurts America, so be it. After all, those blue-collar Americans will probably be Trump voters anyway. And of course, Google, they hate you deplorables.

(BEGIN VIDEO CLIP) KENT WALKER, SENIOR VICE PRESIDENT, GOOGLE GLOBAL AFFAIRS: That fear, I think, not just in the United States, but around the world, is what is fueling concerns of xenophobia, hatred, and a desire for answers that may or may not be there.

INGRAHAM: Actually, Trump's found -- the answers are pretty easy. Two words, America first. Sure, Trump will work with the rest of the world. He's shown that, but on a much more level playing field. So why is Google so threatened by that? I'll tell you why.

WALKER: History teaches us that there are periods of populism, of nationalism that rise up and that is all the reason we need to be in the arena, that is why we have to work so hard to make sure it doesn't turn into a world war or something catastrophic, but instead, is a blip, is a hick up.

INGRAHAM: OK, you stop a world war with your search engine. That's ridiculous. Like a liberal elites across politics, academia, and the entertainment industry, big tech doesn't really like the American voters who turned out for Trump. That is pretty obvious. Google thinks it knows better than their customers, after all, Google execs are richer than they are.

RUTH PORAT, GOOGLE CFO: People are leaving, staff is crying, we are going to lose. That was the first moment I really felt like we were going to lose. Everybody, if you could turn around or go to the person next to you, and do a hug.

INGRAHAM: That's worse than a sign of peace at mass. Sorry, I'm not a sign of peace person. Hug, group hug. Trump won. Oh, my gosh. I needed comic relief today. That made me laugh more than anything else. But then huggy bear Ruth got down to business.

PORAT: Our values our strong, we will fight to protect them, and we will use the great strength and resources in which we have to continue to advance really important values.

INGRAHAM: Again, the word values. What values is Google talking about? Well, the left-wing globalist values that have helped enrich the oppressive Chinese regime at the expense of free expression and religious liberty, and of course, made Google execs really rich.

Part of Google's disappointment was that their efforts in 2016 failed really spectacularly. Of course they claim that they are nonpartisan. But an e-mail leaked to my colleague Tucker Carlson show that the tech giant tried to turn out the Latino vote in 2016 because they were confident Latino voters would support Hillary.

But can you imagine their surprise when they wake up on the morning after election and they see 29 percent of Latinos voting for Trump? They were gobsmacked. Google is not some local business practicing civic engagement, we should all stand up and cheer, oh, Google, go. Google is one of the most powerful companies on the planet.

They are responsible for about 90 percent of all searches online, there are more than 1.2 trillion searches on Google each year, globally. More than 2 billion people use its Android mobile platform. And they've made $110.8 billion in revenue last year alone.

But when smaller companies, smaller companies like Chick-fil-A or Hobby Lobby or In-n-Out burger, when they move in the smallest of ways to support more traditional or even conservative causes, those companies are sued and vilified nonstop by the mainstream media.

When a giant like Google pledges to actively undermine the political will of the American people, the media don't cover it. And you know why? Because the media agree with the Google agenda. This is one of my favorite moments from the Google anti-Trump corporate rally.

UNIDENTIFIED MALE: Is there anything positive you see from this election result?

INGRAHAM: That's actually not so tough. I love those beanies, by the way. I want one. I will get one for my kids. That's a tough one. Anything good that comes out of Trump's election. Well, how is this to try on for size. The economy is booming. Fair trade deals are being negotiated, wages are rising and blue-collar America is more optimistic about the future that they have been for decades.

These Google execs should have to do public acts of penance for their petty, idiotic statements. Here's the bottom line. The Google gang and the rest of big tech were happier when America was losing to China. They didn't care that blue-collar America got poorer and communist China got richer and stronger. So long as Google got richer in the process.

But today, President Trump is turning the tables on that sick dynamic. His policies are working. Google is still rich, of course. But the globalists, even though though the economy is going well, the globalists are still grumpy. That tells you all you need to know. And that's the "Angle."

Adapted from Laura Ingraham’s “The Ingraham Angle” on September 13.