Democrats revealing their true intentions; Senate votes down bill that would protect babies who survived abortions.

With every passing day, the Democratic Party reveals what its true intentions are. Though they claim to be the party of science and facts, their advocacy and voting patterns show they're anything but.

On Monday, the Senate voted on a bill that would require a doctor to use all of his skills to preserve the life of a child born alive after an attempted abortion. The bill came in reaction to grisly, macabre efforts in New York, Virginia and elsewhere to essentially legalize infanticide. Gov. Ralph Northam of Virginia, specifically, verbally supported efforts to legalize it, so President Trump called him out during the State of the Union.

"We had the case of the governor of Virginia where he stated he would execute a baby after birth," Trump said. "To defend the dignity of every person, I am asking Congress to pass legislation to prohibit the late-term abortion of children."

Well, there was essentially little to no response from the Democrats in the room. Stone-faced Nancy just sat there. Well, the Senate attempted on Monday to do something about this Democratic embrace of infanticide and hold doctors accountable. In the end, all but three Democrats voted against permitting the bill to proceed. Shameless. Every one of the announced 2020 Democratic presidential candidates voted no. Sens. Gillibrand, Booker, Harris, Klobuchar, Warren and Bernie Sanders voted to support the wanton extermination of children already born.

Along with Planned Parenthood, they claimed that the bill would limit reproductive rights. And in the words of Sen. Patty Murray, D-Wash., "It's a vote on yet another attack from our Republican colleagues on women's health and their right to access safe legal abortion, this time in the form of an anti-doctor, anti-woman, anti-family piece of legislation."

These people are fanatics. They're zealots, hell-bent on a complete upending of the social order and the upending of just about everything that embodies or even comes close to embodying tradition.

Nice try, Patty. "Anti-doctor, anti-women, anti-family." A family usually requires a child, and infanticide usually requires the taking of a child's life, doesn't it? And what Murray didn't mention is that she and her party's opposition to this common-sense bill is itself anti-science. We have a viable child that has been born. In what way is it anti-woman or anti-family to protect the life of that child? It's craziness.

The president correctly summarized the vote in a pair of tweets: "The Democrat position on abortion is now so extreme that they don't mind executing babies after birth ... This will be remembered as one of the most shocking votes in the history of Congress."

But, my friends, once a party embraces this nihilism, this dark religion, by treating abortion itself like a sacrament, all reason goes out the window. What happened to safe, legal and rare? Their unwavering defense of abortion-on-demand, even if it leads to infanticide, or -- well, let's say it leads to the embrace of other issues like gender fluidity. It is akin to a secular Sharia law among the left.

You deviate from what the social justice warriors stipulate today, and they'll decapitate you in the workplace and in school if they have their way. These people are fanatics. They're zealots, hell-bent on a complete upending of the social order and the upending of just about everything that embodies or even comes close to embodying tradition.

Leftist icon, feminist Gloria Steinem was on "The Today Show" promoting a book of old essays. One in particular written in the 1980s, suggested that the Republican Party and Hitler's views had a lot in common.

"On a more serious note, to put it mildly, is why Hitler was actually elected, and he was elected, and he campaigned against abortion," she said. "I mean, that was - he padlocked the family planning clinics. Okay, so that is still relevant in the terms of the right wing."

I'm afraid Gloria is getting a bit dotty in her old age. She essentially is arguing that in order to save humanity, you have to kill off more humans. And notice how Steinem practices the art of self-protection. Hitler, just like Planned Parenthood, practiced and defended mass extermination, all in the name of racial purity, which is exactly what the founder of Planned Parenthood believed.

Margaret Sanger believed deeply in eugenics. Check out this article from 1926 about Sanger's advocacy for birth control clinics. She said, "We want a world freer, happier, cleaner. We want a race of thoroughbreds". It shouldn't surprise you that Sanger established her first full-service clinic in Harlem in 1930.

Well, why Harlem? Well, as the Washington Times explains, that's where a lot of the black people -- she often referred to as "human weeds" -- lived. Sanger described it as an experimental clinic established for the benefit of colored people. Well, from her, the word benefit really just meant "elimination."

And, in her infamous letter to Clarence Gamble of Procter & Gamble, it was about the need to use the cover of ministers to set up these clinics. She wrote to him, "The most successful educational approach to the population, it's through a religious appeal. We don't want the word to get out that we might - we want to exterminate the Negro population and the minister is the man who can straighten out that idea if it should occur to their more rebellious members." Can you believe that was written?

The left then and the left today has this insatiable appetite for this death culture. The left's dogmatic adherence to their dark gospel means they'll never disavow this undeniable racist Sanger or purge her from their history. New York even named a street after Sanger. Yes, it's called Margaret Sanger Way.

And it's not just the old warhorses of the left preaching this deadly creed. The young upstarts have joined the congregation, even when cooking alone in an empty apartment. Rep. Alexandria Ocasio-Cortez, D-NY, infamously said, young people should question whether they should have children. She said, "There's scientific consensus that the lives of children are going to be very difficult and it does lead, I think, young people to have a legitimate question, should -- is it OK to still have children?" 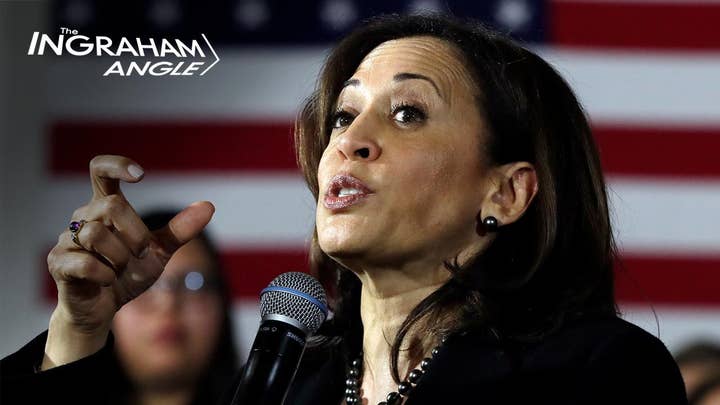 Wait a second, the lives of children are going to be very difficult? Sure are - they're not born. What? Scientific consensus, it's called the eventual human extinction, professor.

But there is some sunshine in the forecast, my friends. A new Marist Poll finds that after a 17-point gap last month, Americans are now just as likely to identify as pro-Life, as pro-Choice and Democrats are where the movement is happening.

Last month, 20 percent of Democrats claimed to be pro-Life. This month that number is up to 34 percent, a massive increase. And Americans are overwhelmingly believing that third-trimester abortions should be outlawed - 71 to 25 percent. We'll pray for the poor people in the 25 percent.

The left, blinded by their dogmatic attachment to abortion, can't see that Americans don't want what they're selling. If AOC really wanted to be edgy, she'd couple her love of creation and all things green with a love of life and defending the most defenseless.

Adapted from Laura Ingraham's monologue from "The Ingraham Angle" on February 26, 2019.