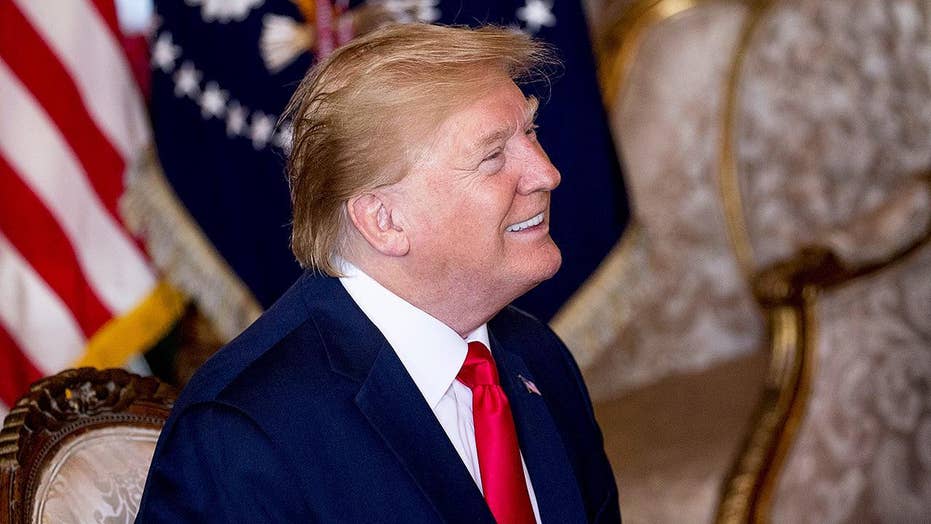 Which of President Trump's accomplishments are the media not talking about?

Committee to Defend the President chairman Ted Harvey on Trump's greatest accomplishments of 2019.

Neither an almost $35 million Mueller investigation, ending in an exonerating report, nor a sham impeachment effort could deter Trump from moving forward with the business of the American people.

REP. MARK GREEN: WANT TO SAVE AMERICA? EMBRACING THIS GIFT FROM THE FOUNDERS IS THE ONLY WAY

In 2019, the president continued to make good on his promise to rip up NAFTA and negotiate and push a new, modern, America First trade deal through the halls of Congress.

In addition to a Japan trade deal that would bring in $7 billion in new agricultural trade, Trump completed a phase-one China deal. China agreed to an additional $200 billion in U.S. purchases in addition to rectifying much of the unevenness and unfairness that has characterized the U.S.-China relationship for decades.

These landmark breakthroughs on trade come on top of the hottest economy in modern history, which is making gains for all Americans.

Trump has created 7.1 million new jobs, including one million manufacturing and construction jobs, reversing the trend during the Obama years when 200,000 manufacturing jobs were lost.

Paychecks, meanwhile, are growing at the fastest pace in a decade and twice as fast for low- and middle-income Americans, all while median household income has hit a record high of $65,084.

Furthermore, the poverty rate is at its lowest point since 2007 as 6.2 million Americans have been lifted off food stamps.

There is simply no denying the continued success of the Trump economy.  Nor is there any denying the historic progress made on issues which were stalled for decades, issues like paid family leave for federal workers and criminal justice reform.

There is simply no denying the continued success of the Trump economy.

Nor is there any denying the historic progress made on issues which were stalled for decades, issues like paid family leave for federal workers. This bill Paid, which passed in December, enables 2.1 million federal employees to spend up to 12 weeks with their newborn children.

This noted achievement comes just a year after Trump made significant progress on criminal justice reform, signing into law the First Step Act, which remedies sentencing disparities and undoes a Clinton-era law that disproportionately affected the African American community.

Beyond these key marks of progress for the Trump administration came the continued construction of a barrier on our southern border, a record 187 judges confirmed by the Senate, the reversal of onerous Obamacare taxes, and a 3.1 percent pay raise for our troops.

These 2019 Trump achievements are but a snapshot of the substantive progress the president has made for the American people.

Democrats, for their part, have chosen to go the way of reckless obstruction, pursuing the first partisan impeachment in history. It was the Russia hoax in 2018.  It was Ukraine in 2019. What will it be in 2020?

While we do not yet know the next bizarre conspiracy theory of the left, we do know what voters care about: the issues, as the economy, health care, and immigration continue to top the polls in issues that matter to the American voter.

But despite the left’s best effort to obstruct and remove the president, ultimately, the good news of the Trump administration in 2019 and beyond will frame and determine the outcome of the 2020 election.

Kayleigh McEnany is the national press secretary for President Donald Trump’s 2020 re-election campaign.  She was the former national spokesperson for the Republican National Committee. She has a J.D. from Harvard Law School and BSFS from Georgetown School of Foreign Service and is the author of "New American Revolution: The Making of a Populist Movement."
ADVERTISEMENT