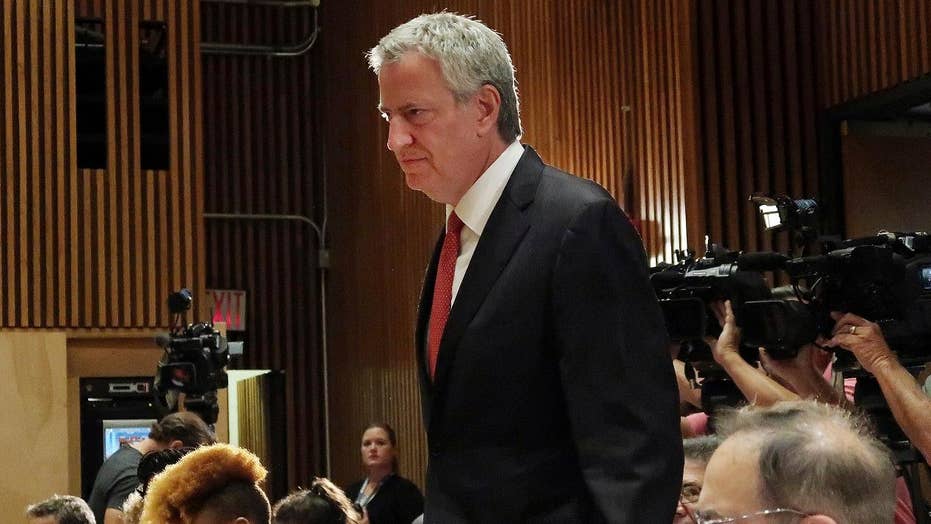 Can a 'robot tax' save us from automated job loss? Bill de Blasio thinks so

Far-left New York City Mayor Bill de Blasio, whose campaign for the Democratic presidential nomination is getting less than 1 percent support in polls, wants to create a “robot tax” and a massive new government bureaucracy to slow the progress and innovation that have made America the world’s economic powerhouse.

The unpopular mayor is terrified of robots, computers with artificial intelligence and other advanced machines that will eventually be able to do things only people can do today, eliminating millions of jobs. He neglects to mention the obvious fact that technological advances also create new jobs – like auto workers replacing blacksmiths, airline pilots replacing stagecoach drivers, and photographers replacing portrait painters.

Under de Blasio’s proposed “robot tax,” companies that replace jobs with automation would have to pay the equivalent of five years of payroll taxes for each employee whose job is lost, making cost-saving innovations far less attractive.

According to a news release from the de Blasio campaign, money collected from this massive tax increase and from “closed tax loopholes” for businesses would be used to create “new, high-paying union jobs in crucial fields such as green energy, health care, and early childhood education. Workers displaced by automation would go to the front of the line for these new positions at comparable salaries to their previous jobs.”

De Blasio’s fear of progress harkens back to the Luddites, a radical group of English textile workers in the early 1800s who smashed textile machinery that was reducing the number of workers needed to produce fabrics.

This is nothing but an anti-progress crusade. It could give the unpopular mayor and presidential candidate a new campaign slogan that turns around the title of the “Back to the Future” movie about time-traveling. De Blasio’s new slogan? “Forward to the Past!”

Warning to the mayor: taking this slogan could raise copyright questions, because “Forward to the Past” was the title of the third episode of the “Back to the Future” cartoon series in 1991, dealing with time travel to the age of the dinosaurs. Fortunately, de Blasio doesn’t want to turn back progress that far.

De Blasio’s fear of progress harkens back to the Luddites, a radical group of English textile workers in the early 1800s who smashed textile machinery that was reducing the number of workers needed to produce fabrics.

According to the Luddite mayor, “current automation practices are an existential threat to our nation’s workforce that destroys good jobs and directs more and more of the profits only to the wealthiest Americans.”

De Blasio has a decidedly dystopian view of the future. He thinks that millions of American workers will soon lose their jobs at breakneck speed and will be rendered useless in society. He clearly has no faith in the free-market system to create new jobs, as it always has.

To combat supposedly dangerous technological innovations, de Blasio wants to put government in charge of huge swaths of the economy by creating a new federal agency whose primary responsibility would be to slow the growth of technology in the workplace.

According to his campaign news release, a President de Blasio would create a new Federal Automation and Worker Protection Agency (FAWPA), which would have “broad authority to regulate the widespread growth of automation and oversee its impact on working people.”

The news release goes on to say: “Any major company seeking to increase automated operations would be required to seek a permit from FAWPA with approval conditioned on the company’s plans to protect existing workers, either by ensuring they receive new jobs with similar pay or severance packages that reflect their tenure of service to the company.”

In other words, under President de Blasio, whenever a company like McDonald's decides to replace a worker with a self-ordering kiosk station, it would not only have to grovel for permission from the bureaucrats at FAWPA – regardless of whether customers want the kiosks – it would have to find another job for all the displaced workers, even if no new jobs were needed.

Additionally, de Blasio’s campaign promised, “FAWPA would also oversee consumer protections and public safety regulations that would result from automation in fields such as driverless vehicles.”

Translation: Under the guise of “safety,” FAWPA would stop companies from innovating and providing people with the goods and services they want.

But President de Blasio wouldn’t be satisfied to simply create a bloated new government agency that would be funded with millions (billions?) of your tax dollars to keep America’s businesses shackled to the 20th century while the rest of the world passes us by.

De Blasio’s ridiculous plan to restrain innovation serves as additional proof that all of the ideas being advanced by the socialists and progressives running for president in the Democratic Party boil down to two basic ideas.

First, have government seize control of the economy. This certainly would succeed in creating jobs – for a huge number of new federal employees, funded by our taxes.

Second, raise taxes. And then raise them again when government needs money to control the economy. Repeat frequently.

Under the distorted view of the far-left Democrats, the only way anything gets done is through more government regulations and higher and higher taxes – not as a result of the hard work and creative ideas of entrepreneurs, businesses and technological innovators.

There’s no question that the U.S. economy is evolving because of technology, and it’s true that more people will likely lose their jobs in the future as a result of new technological achievements.

But rather than be terrified of technology, Americans should embrace innovation. Automation not only improves safety in the workplace and economic efficiency, it dramatically lowers costs, allowing people to buy more products for less. It also frees up huge segments of the economy to shift their focus to more enjoyable kinds of work.

I realize some people might be scared that they could soon be replaced by automation or artificial intelligence, but they should rest assured that this sort of technological revolution has happened numerous times throughout human history, including here in America, and the results have always been positive.

Yet despite all of these transitions, working conditions today are better than they have ever been. In fact, thanks to technology, millions of Americans even work from home now. And Americans’ quality of life is better than it has ever been.

Just a few decades ago, it was unheard of for people to have computers in their homes. Today people walk around with powerful computers in their pockets or purses, and they can order virtually anything they want online and have it shipped to their home for a fraction of the cost of what was charged just 20 years ago.

And despite all of the talk by de Blasio and others about shrinking job opportunities, figures from the Bureau of Labor Statistics show that throughout 2019 there have been more than 7 million job openings in the United States – more than at any other time in U.S. history. Innovation is actually creating jobs faster than Americans can fill them.

As hard as it might be for de Blasio to admit, you can’t fight innovation. All you can do is stubbornly refuse to acknowledge that it’s happening and watch as the rest of the world takes advantage of the emerging technologies that de Blasio and other Luddites are afraid of.

Sorry, Mr. Mayor, but traveling back in time is a fun premise for movies and cartoons, but it doesn’t work in real life. Maybe once you’re out of office you can read up on history and learn its lessons. Or knit clothing by hand to protest the machinery in textile mills.