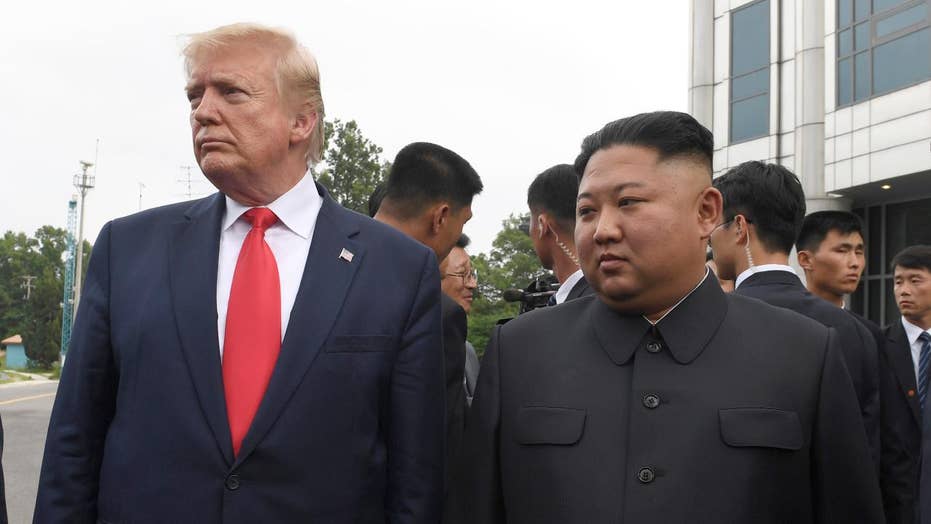 The seemingly spontaneous event happened Sunday following an invitation from the president to Kim Jong Un.

President Trump’s trip Sunday to the Demilitarized Zone between North and South Korea and his historic decision to cross briefly into North Korea was a made-for-TV diplomatic spectacular. But it was also a test of whether personal diplomacy can trump (so to speak) longstanding definitions of a country’s national interests by persuading North Korean leader Kim Jong Un to end his nuclear weapons program.

Foreign policy realists – and count us in – are skeptical. There is no indication so far that Kim has abandoned his goal of the North being accepted as a nuclear weapons power and getting the crippling American and United Nations economic sanctions against his isolated country lifted.

Even key members of Trump’s foreign policy team – National Security Adviser John Bolton, Secretary of State Mike Pompeo and others – are said to believe that national interests, not relationships, are determinative. Trump is betting they are not. We shall see.

In any event, Trump’s unorthodox approach is a huge gamble with some immediate costs and potentially dangerous longer-term risks in calling what may be North Korea’s bluff.

Pyongyang has insisted that Washington end its maximum pressure economic campaign – what the North calls America’s “hostile policy” – and is demanding “respect” as a nation. China says it supports this explanation, citing American hostility to Pyongyang as a root cause of North Korea’s nuclear weapons program.

In his stunning visit, Trump went out of his way to give the North Korean tyrant what he craves. Trump called his step across the line into North Korea a "special moment" that attests to the “great relationship" the United States now has with the North.

Trump also invited the communist dictator to visit the White House at an unspecified time. Soon after his visit, Trump tweeted: “Leaving South Korea after a wonderful meeting with Chairman Kim Jong Un. Stood on the soil of North Korea, an important statement for all, and a great honor!"

North Korea’s nuclear reactors are still churning out fissile material to expand a nuclear arsenal now estimated at 35 to 60 nuclear bombs. Pyongyang continues its efforts to perfect the long-range ballistic missiles to deliver them and has resumed testing shorter-range rockets.

By treating the brutal young totalitarian as a friend whom he can drop in on whenever he is in the neighborhood, Trump is offering both friendship and respect.

Finally, Trump is testing the thesis of South Korean President Moon Jae-in – who has encouraged Trump’s unorthodox approach – and some Americans that improved political relations must precede any nuclear deal.

At the border, Trump said that teams of nuclear negotiators, led by State Department Special Envoy Stephen Biegun on the American side, will soon resume talks on denuclearization on the Korean Peninsula. Those negotiations have been frozen by North Korea’s unwillingness to engage with American counterparts at the brass tacks, working level.

The commencement of U.S.-North Korea talks will be an immediate test of whether Trump’s bet on personal diplomacy over national interest can succeed. The president hedged somewhat on his own announcement, seeming tentative about how soon progress may be made. He cautioned several times that he was in “no rush” to see disarmament progress and said building relationships takes time.

But there are already obvious costs to the path Trump has chosen. The most immediate, which the president’s critics were quick to cite, is the legitimacy Trump has bestowed through his giant step into history by setting foot inside one of the world’s most brutal dictatorships.

The United Nations Human Rights Commission concluded in a 2014 report that North Korea “does not have any parallel in the contemporary world” in its “systematic, widespread, and gross human rights violations.”

U.S. intelligence and human rights groups estimate that North Korea is holding as many as 120,000 political prisoners in unbelievably dire conditions in its labor camps.

In June 2017, North Korea released one such prisoner, Otto Warmbier. But the 22-year-old American student died six days after returning to the U.S. due to injuries incurred during his brutal 17 months of captivity in North Korea – just one example of the horrifying reality of life inside Kim’s gulag.

There are nuclear costs as well. North Korea’s nuclear reactors are still churning out fissile material to expand a nuclear arsenal now estimated at 35 to 60 nuclear bombs. Pyongyang continues its efforts to perfect the long-range ballistic missiles to deliver them and has resumed testing shorter-range rockets.

Kim has not fulfilled the pledge he made after his first summit with President Trump in Singapore in June 2018 to “work towards” nuclear disarmament by providing a full accounting of the North’s nuclear-related facilities. There are at least 140 of them, according to some intelligence estimates.

At his second summit with Kim in the Vietnamese capital of Hanoi four months ago, Trump chose to walk away from the table rather than agree to Kim’s demand that Washington permanently lift all sanctions against his country in exchange for the dismantlement of its main nuclear and fissile material production facilities at Yongbyon.

The longer-term and even graver risk to American national security is that Trump – increasingly desperate for a foreign policy “win” and eager prove the value of his personal diplomacy – may accept what he once rejected and permanently lift the crippling economic sanctions on Pyongyang in exchange for temporary and partial North Korean denuclearization.

William Tobey is a senior fellow at the Belfer Center for Science and International Affairs at Harvard University. He is a former deputy director of the U.S. nuclear stockpile who served on the National Security Council under Republican and Democratic presidents.