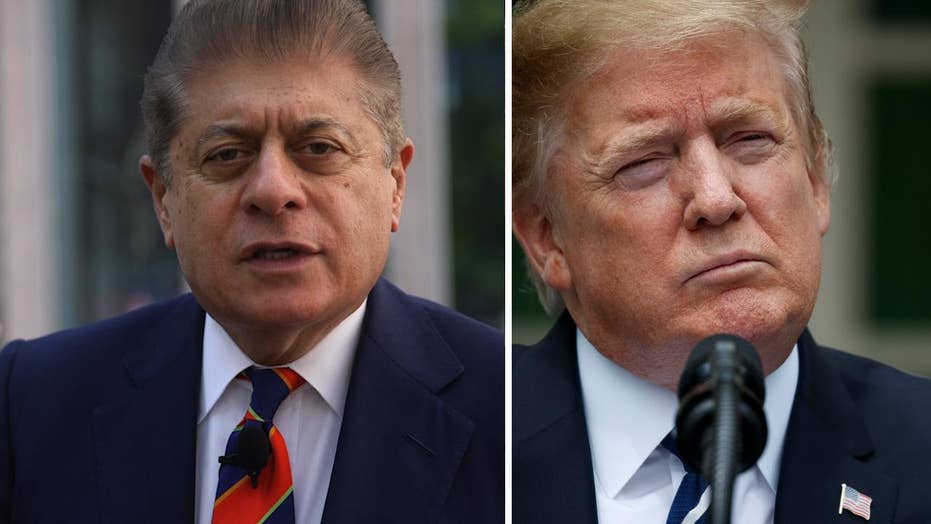 Judge Napolitano: Is the country ready to go through impeachment hearings?

Judge Napolitano's Chambers: Judge Andrew Napolitano weighs in on the firestorm surrounding Republican Rep. Justin Amash (R-MI) and his calls for President Trump to be impeached. Is Amash right or wrong to make the call, and can the country handle the impeachment process?

"If the president does it, that means it is not illegal."

The revelation last weekend by Michigan Republican Congressman Justin Amash that he believes the Mueller report accuses President Donald Trump of impeachable offenses has ignited firestorms in both major political parties on Capitol Hill. Amash's argument is simple and essentially unassailable, though his fellow congressional Republicans don't want to hear it and Democrats don't know what to do with it.

When Special Counsel Robert Mueller delivered his report to Attorney General William Barr, it was a 448-page tome that effectively summarized nearly two years of work and nearly two million pages of documents in an effort to establish whether elements of the Russian government interfered with the 2016 presidential election, and, if so, whether the Russians had any American collaborators in the Trump campaign.

The investigation of Russians and potential American collaborators expanded because of personal behavior of President Trump, which was aimed at delaying or derailing Mueller's investigation. Thus, when the Mueller Report reached Barr's desk, it was in two volumes -- the first was about the Russians and the second was about the president.

Mueller found 127 communications between Trump campaign officials and Russian agents between June 2015 and November 2016 -- Trump publicly said there were none -- and as a result of those communications, the campaign came to expect to receive "dirt" on Trump's principal opponent, Hillary Clinton, from the Russians. The dirt arrived in the form of hacked emails, but Mueller and his team were unable to "establish" the existence of a criminal conspiracy between the Russians and the Trump campaign.

Mueller indicted Russians for interference, and he found evidence of a criminal conspiracy, but not enough evidence to prove the conspiracy case to a jury beyond a reasonable doubt.

The second volume of the report addressed 10 instances in which the president himself attempted to interfere with Mueller's work. Such attempted interference, when done for a corrupt purpose -- such as protecting himself or his friends from the reach of the FBI -- constitutes obstruction of justice. Here is where the Mueller report and Barr's response to it get a bit dicey.

The more serious and clearly criminal of these obstruction events consists in Trump instructing those who worked for him in the White House to put documents containing material falsehoods into government files that were about to be subpoenaed, and instructing the same folks to lie to FBI agents. Mueller did not seek an indictment of the president on these crimes because he knew that Barr, his boss, would not permit one. The reasons Barr has given for not permitting the indictment are legally troublesome; they constitute a very narrow reading of the obstruction of justice statute and a misapplication of Department of Justice policy.

Barr has not permitted Mueller to seek an indictment of Trump because Barr reads the obstruction statute as letting Trump off the hook because he was not charged with conspiracy to collaborate with the Russians -- the original crime Mueller was investigating. That view of obstruction -- an innocent person cannot legally obstruct an FBI investigation of himself -- has been rejected by nearly all law enforcement, including by Barr's own DOJ prosecutors.

We know that Mueller's obstruction allegations -- which have not been effectively contradicted by the White House -- constitute not only crimes but also impeachable offenses. We know that because when Nixon asked John Ehrlichman and H.R. Haldeman, his principal aides, to lie to a grand jury, and when President Bill Clinton asked Betty Currie, his White House personal secretary, to lie to FBI agents, the House of Representatives -- either through the House Judiciary Committee by direct vote -- approved articles of impeachment against both of them for obstruction of justice.

This is Amash's argument: The special counsel found evidence of obstruction of justice by the president, and historically presidential obstruction of justice is an impeachable offense. This is a legal narrative, not a political one. But it has heretofore not been articulated publically by any Republican officeholder, until Amash courageously did so last weekend.

The Nixonian argument that the president can do no wrong was soundly rejected by the lessons of Watergate and Nixon's reluctant resignation, but it has reared its head again. No serious legal thinker -- not even an attorney general bent on protecting the president -- can make it with intellectual honesty or a straight face.

Most Democratic congressional leadership thinks impeaching a popular president would be fruitless, and might even help Trump solidify his base. These folks have argued that impeachment should not be undertaken, no matter how criminal or impeachable his documented behavior, without a broad bipartisan consensus in support of it.

Who beside Justin Amash will effectively address these questions?