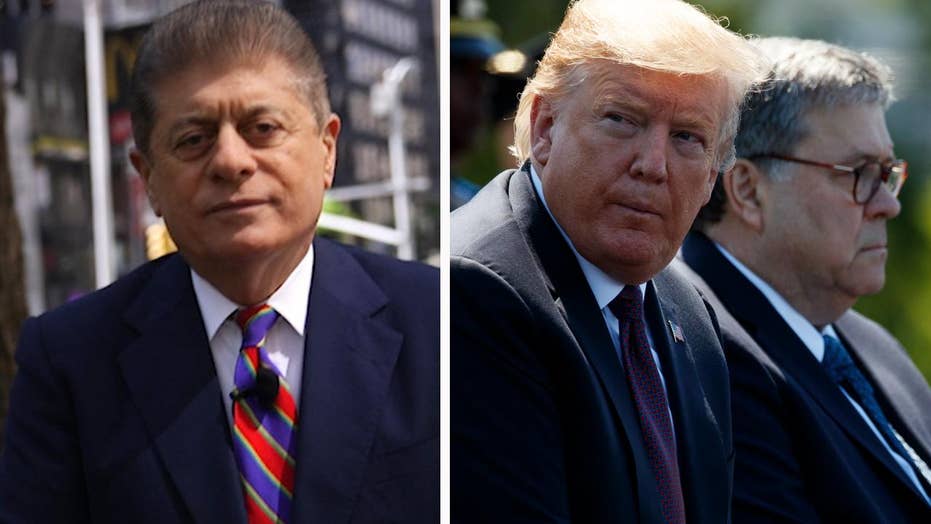 Judge Napolitano: Trump has been abandoning separation of powers Madison so carefully crafted

There was a time in American history -- nearly all of it up to the presidency of Woodrow Wilson -- when the federal government followed basic constitutional norms. With some unique and discrete exceptions, like the Civil War, Congress wrote the laws, the president enforced them, whether he agreed with them or not, and the judiciary interpreted them and assessed their compatibility to the Constitution. This is the separation of powers.

My late friend Justice Antonin Scalia often argued that the constitutionally mandated separation of powers is the most uniquely American and liberty-insuring aspect of the Constitution. James Madison, who essentially wrote the Constitution, believed that tension and jealousy between the three branches would enhance personal freedom by preventing the accumulation of too much governmental power in the hands of too few. But he publicly worried about that accumulation, and the branch he feared the most was the presidency.

When the federal courts have addressed challenges to the separation of powers -- for example, when the president writes a law and then enforces it -- they have uniformly upheld the Constitution. The president can't write a statute; Congress can't prosecute or acquit people; the courts can't determine tax rates. The Madisonian reason for all this is to maximize personal liberty by frustrating governmental power.

Madison's other core value was limited government. The Madisonian view of the federal government is one limited to exercising only those powers delegated to it in the Constitution.

That is, theoretically, how all this worked until a constitutional scholar from Princeton, with his own ideas of government without end, became president.

Wilson turned Madison's core values on their heads. His view of the federal government -- one adopted by all his successors -- was that the federal government can do whatever there is a political will for it to do, except that which the Constitution expressly prohibits. Wilson became the incarnation of Madison's fears when he -- not Congress -- prohibited folks from reciting the Declaration of Independence aloud outside military recruiting offices. Then he prosecuted them when they did so, arguing that the First Amendment only restrained Congress and not the presidency. Such an argument would flunk a course in constitutional law today.

Today, presidents have basically abandoned the separation of powers Madison so carefully crafted.

Three events took place last week -- all at the hands of President Donald Trump -- and each warrants examination from the Madisionian perspective as each assaults limited government and rejects the separation of powers. Each, as well, involves the accumulation of unconstitutional power in the branch of government that Madison feared the most.

Trump ordered acting secretary of defense Patrick Shanahan not to purchase a missile defense system that Congress had authorized and directed him to purchase -- and to which Trump had agreed -- but to divert that missile-budgeted money to build a fence along a 50-mile stretch of the 1,900-mile Texas/Mexico border. The secretary has publicly indicated that he will comply.

This violates the separation of powers because it is an expenditure of money from the Treasury -- solely a congressional prerogative -- without a congressional appropriation. As well, it directly defies Congress on the construction of this fence. The president asked Congress for the funds to build the fence and Congress said no. He took funds from the Treasury to build it anyway.

In the same breath last week, the president also ordered the acting secretary to deploy troops to assist the Border Patrol to enforce immigration laws at the Texas/Mexico border. This, too, is unlawful because among the laws Trump swore to uphold is a federal statute prohibiting the use of the military for domestic law enforcement.

Also, last week, the president announced the imposition of a 25 percent tariff on nearly all goods entering the U.S. from China. This, too, he did on his own, even though under the Constitution only Congress can impose taxes. Is the tariff a tax by another name? Trump argues that the Chinese government will be paying billions into the U.S. Treasury and he can then spend that money however he wishes.

Trump is wrong again. First, the tariffs are collected at the border and are initially paid directly by the Chinese seller, not the Chinese government. The seller then passes the tariff cost on to American consumers, who purchase the goods on which the tariffs have been imposed. The tariff is actually a sales tax, which will increase by 25 percent the cost of any product purchased in America that originated in China.

So, for every dollar that a Chinese seller pays to the U.S. Treasury, an American consumer reimburses the seller one dollar. Multiply that by a few hundred billion dollars, and you can grasp Trump's destructive ignorance of Economics 101. Perhaps he has forgotten that only Congress can direct the expenditure of funds in the Treasury; though this is a constitutional principle he has already shown that he rejects.

Since Woodrow Wilson's broad expansive view of presidential power infected the American presidency, the public, the media and Congress often look the other way at presidential constitutional violations. When Congress does that, isn't it giving up its prerogatives by letting the president seize and then exercise what is really congressional power? The Supreme Court has said that the branches of government cannot trade or exchange or cede away constitutional powers, whether by ignorance or weakness or consent, without a constitutional amendment.

Madison's ideological adversary at the creation of the American Republic was Alexander Hamilton. Hamilton argued that the president should serve for life. Madison countered that life-tenure would make the president a king.

Once upon a time in America, Madison's fear of a king would have been unthinkable and unrealistic. Today, it is becoming the norm.