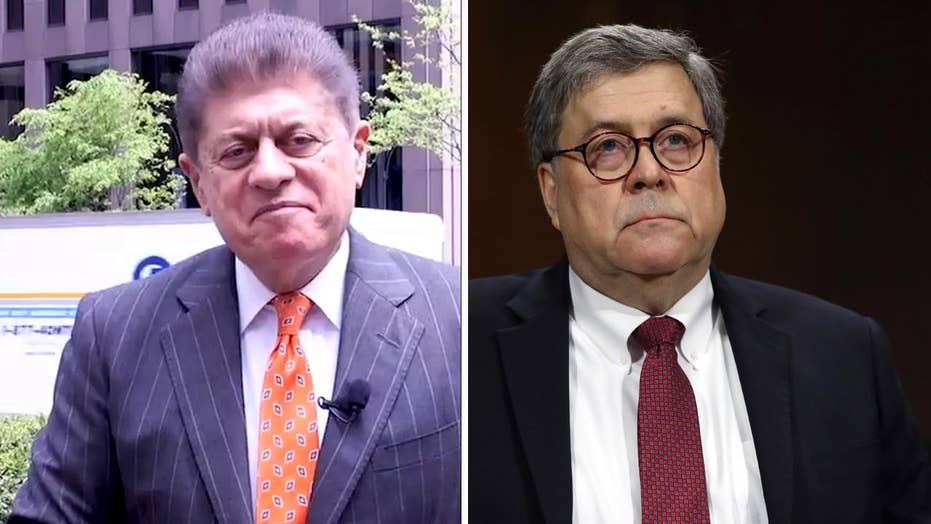 Judge Napolitano's Chambers: Judge Andrew Napolitano weighs in on Attorney General William Barr's testimony under oath that he did not know of any complaints about his four-page summary of the Mueller report.

When special counsel Robert Mueller completed his 448-page final report of his nearly two-year investigation of Russian interference in the 2016 presidential election, the Trump campaign and its relationships to Russian agents, and the personal efforts of President Donald Trump to impede the investigation, he complied with the federal rules and delivered his report to the attorney general. Barr examined the report and decided to undertake two approaches to releasing it to Congress and to the public.

The first approach was to summarize its principal conclusions and the second was to redact from public and congressional view materials that federal statutes and court rules prohibit him from making public. So, late on a Sunday afternoon in April, Barr authored a four-page summary of Mueller's conclusions, which related that Mueller and his team of FBI agents and prosecutors could not establish the existence of a conspiracy between the Trump campaign and Russian agents for the campaign to receive something of value from the Russians. Barr offered the opinion that this conclusion exonerated Trump on the conspiracy -- what the media falsely called “collusion” -- charge.

The second statement in Barr's four-page summary was that while Mueller found evidence of obstruction of justice by Trump personally, he left the decision of how to proceed with this evidence to Barr; Barr then concluded that the president would not be prosecuted.

In the meantime, Barr and his team began to scrutinize in private every word in Mueller's report so as to reveal only what federal statutes and court rules permit to be revealed. While this process was going on, some folks on Mueller's team leaked to the media their displeasure with Barr's four-page letter because they felt it had sanitized the report and failed to capture the flavor, tone and gravity of the allegations it made against Trump personally.

After media outlets published the story of this disenchantment, Mueller himself sent a letter to Barr essentially objecting to the same matters that some on his team had complained about to the media.

While government officials often disagree with each other, this little spat over whether Barr's summary was faithful to Mueller's report became important because of the following seemingly innocuous event: When Barr was testifying before a House subcommittee about his budgetary requests for the Department of Justice in the next fiscal year, he was asked by a member of the subcommittee if he knew anything about any criticisms by members of Mueller's team about his four-page summary of Mueller's conclusions. He replied, "No, I don't."

But of course, Barr did know because Mueller told him in his letter of the complaints his office had about the four-page letter. Did the attorney general deceive Congress? The Democratic members of the Judiciary Committee grilled the attorney general later on this, and he offered that a follow-up telephone call between himself and Mueller dissipated Mueller's written complaint. Yet, the fact that Mueller -- a seasoned government official -- wrote a letter about this knowing its near certain permanent residence in government files is telling. He made a permanent record of his complaint about Barr's sanitized letter, and Barr hid that record from Congress.

At the same time that all of the above was transpiring, the House Judiciary Committee subpoenaed the full unredacted Mueller report from Barr, and he dropped the ball again. Instead of challenging the subpoena before a federal judge and asking her to rule on the lawfulness of compliance, Barr ignored it. This produced calls for the House to hold him in contempt; a largely symbolic gesture, yet an unpleasant one for Barr.

What's going on here? It is clear that Barr's four-page letter, about which Mueller complained to Barr and some of Mueller's team complained to the media, was a foolish attempt to sanitize the Mueller report. It was misleading, disingenuous and deceptive. Also, because Barr knew that all or nearly all of the Mueller report would soon enter the public domain, it was dumb and insulting.

Barr knows the DOJ is not in the business of exonerating the people it investigates. Yet he proclaimed in his letter that Trump had been exonerated. When the report revealed 127 communications between Russian agents and Trump campaign officials in a 16-month period, and the expectations of those officials of the release of Hillary Clinton's hacked emails, that is hardly an exoneration.

Was Barr's testimony before Congress deceptive? In a word: Yes.

In a bit of bitter irony, the statute that the House Democrats now claim Barr violated is the same obstruction of justice statute that Mueller says the president violated -- engaging in deceptive or diversionary behavior for a corrupt purpose in order to impede a government investigation or inquiry. This is a gravely serious charge against the attorney general. Barr's prosecutors regularly prosecute defendants for doing what it now appears Barr has done. And the president last weekend added fuel to this fire by changing his mind on whether he will allow Mueller to testify publicly about his report. He now won't permit it.

History teaches that these unpleasant events -- like Watergate and Whitewater -- can take on lives of their own, and can often have unintended consequences. But the lesson is always the same: It would be better for all of us if the whole truth comes out and comes out soon.