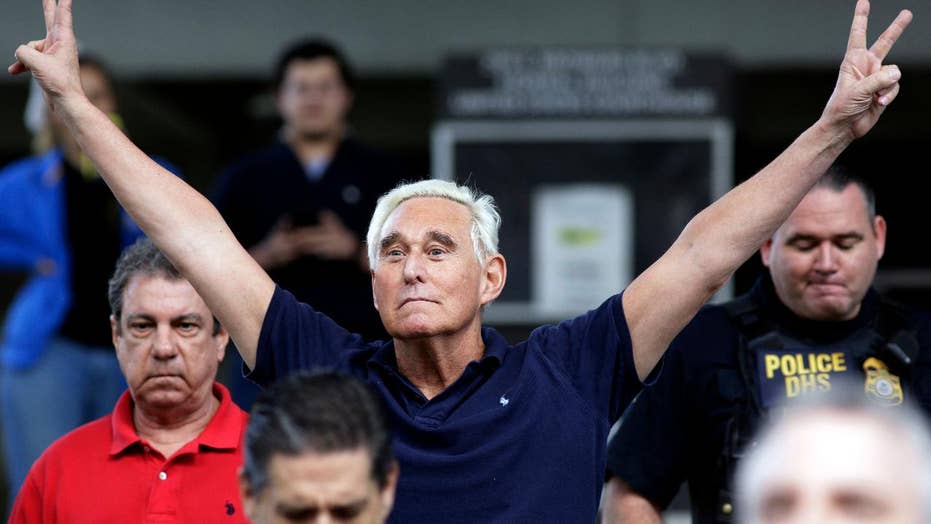 Judge Napolitano: How Roger Stone's arrest was an American nightmare

Judge Napolitano's Chambers: Judge Andrew Napolitano weighs in on why it was wrong for the FBI to use such extreme use of force when arresting Roger Stone early in the morning in Fort Lauderdale.

Last Friday, on a quiet residential street at 6 in the morning, the neighborhood exploded in light, noise and terror. Seventeen SUVs and two armored vehicles arrived in front of one house. Each vehicle had sirens blaring and lights flashing. The house, which abutted a canal, was soon surrounded by 29 government agents, each wearing military garb, each carrying a handgun and most carrying high-powered automatic rifles.

In the canal were two amphibious watercrafts, out of which more heavily armed government agents came. Circling above all this was a helicopter equipped with long-range precision weaponry and high-powered spotlights.

Four agents approached the front door to the house. Two held a battering ram, and two pointed their rifles at the door. One of the agents shouted and banged on the front door until the terrified owner of the house emerged, barefoot and wearing shorts and a T-shirt. He was greeted in the dark at his open front door by two rifle barrels aimed at his head.

This was not a movie set; it was not a foreign city in a war zone; it was not the arrest of the Venezuelan opposition leader in Caracas. It was middle America, Fort Lauderdale, Florida. The agents worked for the FBI, and the target of this operation was not a drug kingpin or a terrorist operative or a kidnapper of babies. It was a peaceful American in his own home -- a political operative and longtime friend of President Donald Trump's, named Roger Stone.

Why were there more FBI agents sent to arrest Stone than Navy SEALs sent to kill Osama bin Laden? Why jackboots in the morning in America? Here is the back story.

Stone has been both a paid formal adviser and an unpaid informal adviser to Trump for 40 years. He was fired from Trump's presidential campaign during the summer of 2015, but he continued to work on his own to help Trump defeat Hillary Clinton in the 2016 presidential election. Some of that help -- according to the government -- involved the release of embarrassing Clinton emails that had probably been hacked by Russian agents.

Last Thursday, one of special counsel Robert Mueller's grand juries indicted Stone on five counts of lying to Congress, one count of witness intimidation and one count of obstruction of justice. His Gestapo-like arrest followed his indictment by just a few hours.

Stone was represented by counsel throughout the time of his testimony before Congress last year. He was the recipient of grand jury subpoenas for his text messages, his emails and other records -- all of which, through his counsel, he surrendered. He claims that when asked by members of the House Intelligence Committee about certain aspects of these, he innocently forgot about them. Who could remember each of 1 million texts and emails?

In the real world -- where the influence of politics into law enforcement is kept to a harmless minimum -- defense counsel is generally known to prosecutors throughout their investigation of a target. According to Stone, federal prosecutors have known for a year who his lawyers are. Also in the real world, when a defendant has been indicted for a nonviolent crime, has no criminal record and is not a flight risk or an imminent danger to society, prosecutors inform defense counsel of the indictment, send the defense counsel a copy of it and request the peaceful and dignified surrender of the indicted person.

In the current, unreal world -- where politics deeply infuse law enforcement -- prosecutors use brute force to send a message of terror to innocent defendants. Like all defendants at the time of arrest, Stone is innocent until proven guilty beyond a reasonable doubt.

What message does brute force send? It is a message of terror, and it has no place in American life. As if to add embarrassment to terror, the feds may have tipped off CNN, which carried all this live in real time.

When I interviewed Stone on Fox Nation, after a judge released him without requiring any bail, he told me that he will not cave to this terror but he is willing to speak with the prosecutors. Stone wavered a bit when I pressed him on the nature and extent of any communication between his lawyers and Mueller's team and on the nature of any cooperation by him personally with Mueller. As a practical matter, his lawyers must communicate with Mueller's team to address the logistics of pretrial events, as well as their discovery of the evidence in the government's possession.

One item in the government's possession that is very problematic constitutionally is the transcript of the testimony Stone gave to the House Intelligence Committee, wherein the indictment accuses Stone of lying. Because that testimony is classified, Stone is not permitted to see it, and his lawyers -- who may view it only in a secret facility -- may not copy it.

How can they defend against these charges? How can it be that the government has a piece of paper that allegedly is proof of the crime charged and the defendant's lawyers may not copy it? Didn't the government waive the classified nature of this document by Stone's very presence at the hearing where the document was created? What remains of the constitutional guarantee of confronting one's accusers and challenging their evidence?

If Stone goes to trial, the soonest it could be held is early 2020 -- in the midst of the Iowa caucuses and the New Hampshire primary and 2 1/2 years after Mueller's appointment.

No innocent American merits the governmental treatment Stone received. It was the behavior of a police state where the laws are written to help the government achieve its ends, not to guarantee the freedom of the people -- and where police break the laws they are sworn to enforce. Regrettably, what happened to Roger Stone could happen to anyone.