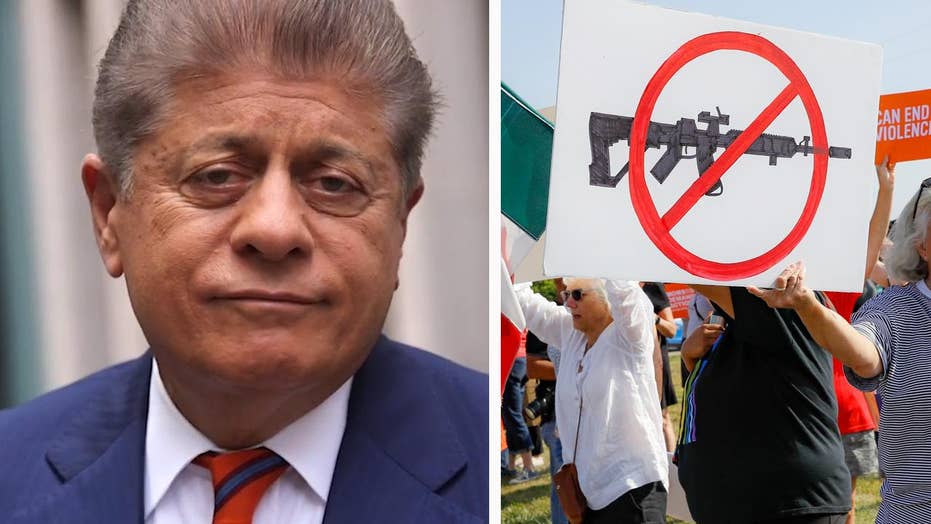 Judge Napolitano: Guns and personal liberty and why we have a Constitution

Judge Napolitano's Chambers: Judge Andrew Napolitano explains the Second Amendment and why calls to take legally-owned guns away from gun owners is not the right answer.

Last weekend's mass murders in El Paso, Texas, and Dayton, Ohio, have produced a flood of words about everything from gun control to mental illness to white nationalism. Most of those words have addressed the right to keep and bear arms as if it were a gift from the government. It isn't.

The Supreme Court has twice ruled in the past 11 years that the right to keep and bear arms is an individual pre-political liberty. That is the highest category of liberty recognized in the law. It is akin to the freedoms of thought, speech and personality.

That means that the court has recognized that the framers of the Constitution did not bestow this right upon us. Rather, they recognized its preexistence as an extension of our natural human right to self-defense and they forbade government – state and federal – from infringing upon it.

It would be exquisitely unfair, profoundly unconstitutional and historically un-American for the rights of law-abiding folks – "surrender that rifle you own legally and use safely because some other folks have used that same type of weapon criminally" – to be impaired in the name of public safety.

It would also be irrational. A person willing to kill innocents and be killed by the police while doing so surely would have no qualms about violating a state or federal law that prohibited the general ownership of the weapon he was about to use.

With all of this as background, and the country anguishing over the mass deaths of innocents, the feds and the states face a choice between a knee-jerk but popular restriction of some form of gun ownership and the rational and sound realization that more guns in the hands of those properly trained means less crime and more safety.

Can the government constitutionally outlaw the types of rifles used by the El Paso and Dayton killers? In a word: No.

Can the government constitutionally outlaw the types of rifles used by the El Paso and Dayton killers? In a word: No.

If you don't believe me on this, then read the Declaration of Independence. It justifies violence against the British government because of such thefts.

Governments are the greatest mass killers on the planet. Who can take without alarm any of their threats to emasculate our right to defend our personal liberties?

In theory, all of this was known by President Trump when he addressed the nation and attributed the weekend slaughters to mental illness, the freedom to express hateful ideas on the Internet and violent video games. He should have consulted his lawyers before he spoke.

Federal law prohibits records of mental health problems, unless they result in involuntary institutionalization, from entering the government's databases that are consulted in background checks. And the Supreme Court has already ruled that the government cannot censor, ban or punish opinions expressed on the Internet or games played there.

Then the president condemned hate. Do you believe his condemnations? He has, after all, praised the white supremacists at Charlottesville, Virginia, in 2017 as "good people," even though one of them pleaded guilty to the first-degree murder of a young woman, and even though, as a candidate and later as president, he argued that the southwest United States was being "invaded" and "infested" by Hispanics.

That white supremacy ideology – "let's repel the Hispanic invaders because the feds won't do so" – resonates in the manifesto of the man accused of being the El Paso killer, which he published about 20 minutes before the shootings. That ideology is far more widespread than most Americans realize. The FBI recently demonstrated as much. This form of hatred of people because of their immutable characteristics breeds violence.

We know that some among us love to hate. That is their right, but they have no right to act violently beyond their perverse thoughts. And all people have the right to defend against such violence by using guns to do so.

The president also offered his support for "red flag" laws. These horrific statutes permit police or courts to seize guns from those deemed dangerous.

Red flag laws are unconstitutional. The presumption of innocence and the due process requirement of demonstrable fault as a precondition to any punishment or sanction together prohibit the loss of liberty on the basis of what might happen in the future.

In America, we do not punish a person or deprive anyone of liberty on the basis of a fear of what the person might do. When the Soviets used psychiatric testimony to predict criminal behavior, President Ronald Reagan condemned it. Now, the president wants it here.

The United States is not New Zealand, where a national legislature, animated by fear and provoked by tragedy, can impair fundamental liberties by majority vote. In America, neither Congress nor the states can outlaw whatever handguns or rifles they want to outlaw or infringe upon the right to own them.

The government can no more interfere with Second Amendment rights than it can infringe upon any other rights. If this were not so, then no liberty – speech, press, religion, association, self-defense, privacy, travel, property ownership – would be safe from the reach of a fearful majority.

That's why we have a Constitution.