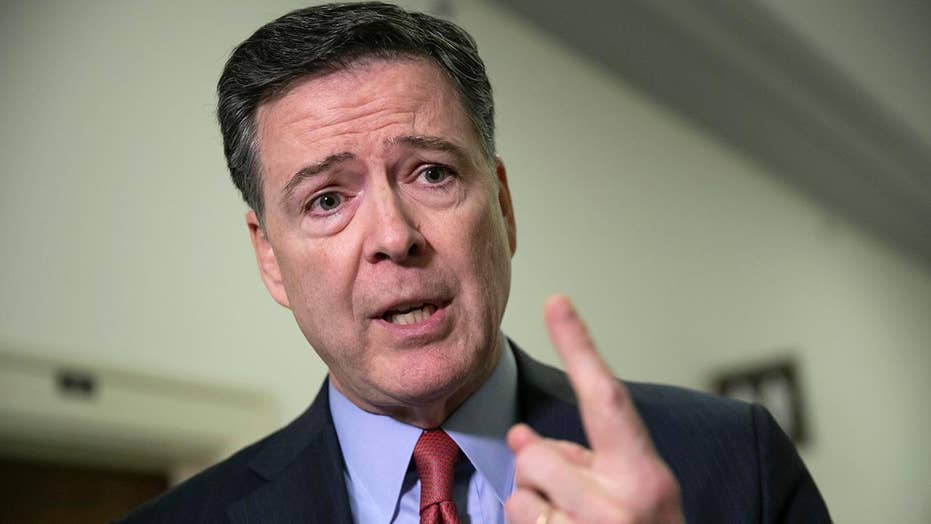 James Trusty on Comey IG report: He's too important to be bound by the rules he's well aware of

Former FBI Director James Comey is the latest example of an Obama-Biden administration that was intent on using the levers of power for political and personal preservation.

Despite the false narrative that the biggest scandal of the Obama years was the president showing up in a tan suit, the truth is much more political.

Two reports point to the behavior by Comey. The Department of Justice (DOJ) Inspector General (IG) makes clear in the report that was released Thursday that Comey was careless, negligent, and intent on violating the letter and spirit of his duties and obligations.  He is hardly the first Obama administration official to be guilty of such behavior.

Many of us thought former Secretary of State Hillary Clinton should have been prosecuted for her actions. She selfishly put our country at risk by deliberately placing classified information in a non-secure setting and illegally hiding government records.

Evidence makes clear that on the same day she started her Senate confirmation hearing she set up her own personal server to bypass federal records laws. Intent?

Nevertheless, Comey unilaterally decided Clinton should not be prosecuted, telling Michigan Republican Rep. Tim Walberg, “I think she was extremely careless. I think she was negligent. That I could establish. What we can't establish is that she acted with the necessary criminal intent."

Comey's behavior goes beyond extremely careless or negligent.  According to the DOJ IG, "We conclude that Comey’s retention, handling, and dissemination of certain memos violated Department and FBI policies, and his FBI Employment Agreement."

From the first DOJ IG report, they found Comey, "extraordinary and insubordinate."  Further FBI analysis stated, "The damage caused by these employees' actions extends far beyond the scope of the Midyear (Clinton) investigation and goes to the heart of the FBI's reputation for neutral fact-finding and political independence."

But the politicization of government institutions under President Obama goes back even further.  Prior to the Clinton fiasco there was the IRS targeting of conservative political organizations.  While in office President Obama declared that there, “…wasn’t even a smidgen of corruption.”

But there was. And the DOJ after Obama-Biden left office paid millions of dollars to settle the case.

Another headline earlier this week demonstrates just how pervasive this attitude has become on the left.

Former Federal Reserve Bank of New York President William Dudley, in a Bloomberg op-ed Tuesday suggested the Federal Reserve should get in on the action by using politics as its guide.

Dudley wrote, "Central bank officials face a choice: enable the Trump administration to continue down a disastrous path of trade war escalation, or send a clear signal that if the administration does so, the president, not the Fed, will bear the risks — including the risk of losing the next election."

In other words, Dudley thinks the Federal Reserve should be used as a weapon to manipulate election results.

But the biggest case is yet to come.  With the Mueller report now in the rearview mirror, what will the DOJ IG, and more importantly U.S. Attorney John Durham, find and do as he and his team examine the origins of the spying on the Trump campaign?

Thus far the DOJ IG has made several recommendations for prosecution but the DOJ has pursued none of them.

That’s disheartening for those who expect equal application of the law and justice, especially for those who say they should be held to a higher standard.

Our country may be divided politically on the solutions to improve the USA, but we should be united on the equal application of the law.

We should also expect the levers of power are not used for politics and personal preservation.

Historically the DOJ, the FBI, the IRS, the Federal Reserve were all above politics.

It should scare all of us that this changed in the Obama-Biden administration. A clearer picture, one based on intent, is emerging.