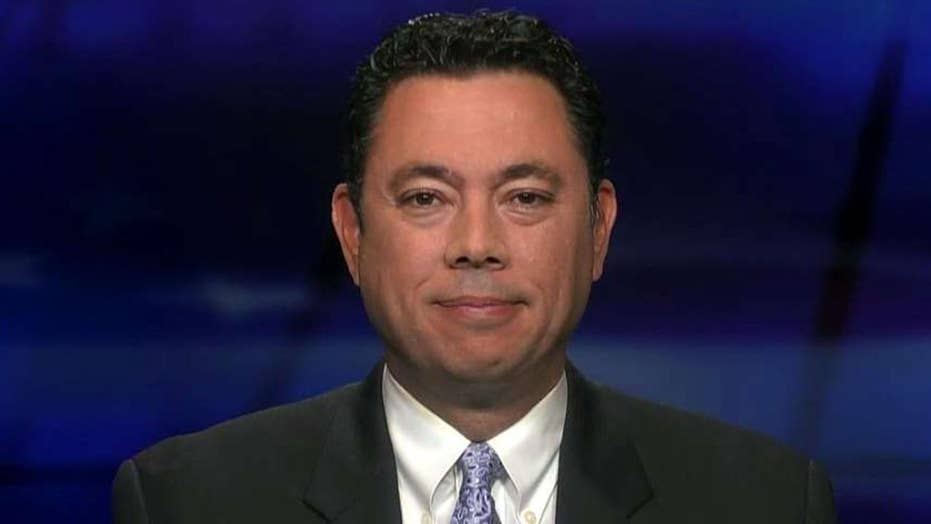 Former Republican lawmaker Jason Chaffetz, who once chaired the House Committee on Oversight and Government Reform, says Democrats are overreaching with their testimony requests for the Trump administration.

The upcoming House Oversight Committee vote on Wednesday on a contempt resolution against Commerce Secretary Wilbur Ross has a little bit of everything – misdirection, hyperbole, projection, hypocrisy, and abuse of authority.

The gamesmanship on display from Oversight Committee Chairman Elijah Cummings, D-Md., demonstrates just how desperate Democrats have become to reestablish their fact-free narrative against President Trump.  With the Mueller report failing to establish collusion or obstruction, Democrats have turned to the Commerce Department to shore up their disintegrating storyline.

In a hyperbolic letter to Secretary Ross, Cummings seems more worried about reaffirming his party's crumbling obstruction of justice narrative than about the actual question at issue – the inclusion of a census question about citizenship status.

Cummings writes to Ross, "Unfortunately, your actions are part of a pattern. The Trump Administration has been engaged in one of the most unprecedented cover-ups since Watergate, extending from the White House to multiple federal agencies and departments of the government and across numerous investigations."  With that tenuous link to the Mueller obstruction narrative, Democrats misdirect readers about the real source of the conflict.

This isn't about a Watergate-style cover-up.  This is about Democrats wanting to influence the news cycle ahead of a big Supreme Court decision.

In reality, the Commerce Department has already produced 14,000 pages of documents in response to the subpoenas. What has not yet been produced is tied up in litigation at the Supreme Court that will conclude by June 28 – the last day the Court could issue its ruling on the census issue.  Democrats fail to mention the three upcoming Commerce Department witness interviews scheduled June 11, 18, and 21.

So why the hyperbolic language and extreme step of scheduling a contempt resolution? Ranking Member Jim Jordan suggests the real motive:

“This is yet another reckless and transparent attempt by Chairman Cummings to interfere with ongoing litigation before the Supreme Court over the 2020 Census. Chairman Cummings’s interest in the Census is entirely about scoring political points, not conducting meaningful oversight. The Democrats’ desperation to affect the outcome of the case raises the question: why don’t they want to know how many American citizens are in the United States of America?"

With the Mueller Report failing to establish collusion or obstruction, Democrats have turned to the Commerce Department to shore up their disintegrating storyline.

In his letter, Cummings goes on to reference President Trump's vow to fight all subpoenas in the House's duplicate Russia Collusion investigations, implying the Commerce Department was also refusing to comply in this investigation.

The facts differ. The Commerce Department is complying with subpoenas. Witnesses have been scheduled.  Documents have been produced and others will arrive as soon as the litigation concludes, which could be at any time. Turning to contempt is hardly a last resort for Cummings.  It is a political game.

There are few clearer examples of projection than Cummings' letter to Ross, which better describes the actions of Democrats during the Clinton investigation than the actions of Commerce Department officials now.

Cummings' letter is a good description of how the Obama administration and House Democrats responded when I issued a subpoena to Hillary Clinton IT aide Bryan Pagliano in September 2016.  Pagliano failed to even show up after twice being subpoenaed to testify about the private server he set up in Hillary Clinton's residence.

The Obama administration really did stonewall on documents in his case. For nearly four years Pagliano served as an IT specialist at the Department of State, but the administration claimed he never sent nor received a single email during his four-year stint there.

Pagliano had already been inexplicably granted immunity by the Obama Justice Department and faced little legal jeopardy for his testimony. Yet Cummings and his colleagues expressed no concerns about the process by which an administration was flouting congressional authority at that time.

When we voted to hold Pagliano in contempt, neither Cummings nor any other member of his party supported that contempt resolution.  In his letter this week, Cummings describes strategies with which he is very familiar – since he and the Obama administration used them to avoid complying with the Pagliano subpoenas. Those allegations do not apply to Secretary Ross or his department.

Cummings writes, "The Administration has been challenging Congress' core authority to conduct oversight under the Constitution, questioning the legislative bases for congressional inquiries, objecting to committee rules and precedents that have been in place for decades under both Republican and Democratic leadership, and making baseless legal arguments to avoid producing documents and testimony."

Now, they have deliberately requested materials that are tied up in litigation. It's the same tactic they are deploying with the Mueller report, wherein they have threatened to hold Attorney General Barr in contempt if he doesn't produce grand jury materials he is not legally permitted to disclose.

Neither case is about precedent. This is about grandstanding. When Elijah Cummings refers to decades of precedent under both Republican and Democratic administrations, you can bet he isn't referring to the precedents the Obama administration set back in the fall of 2016.