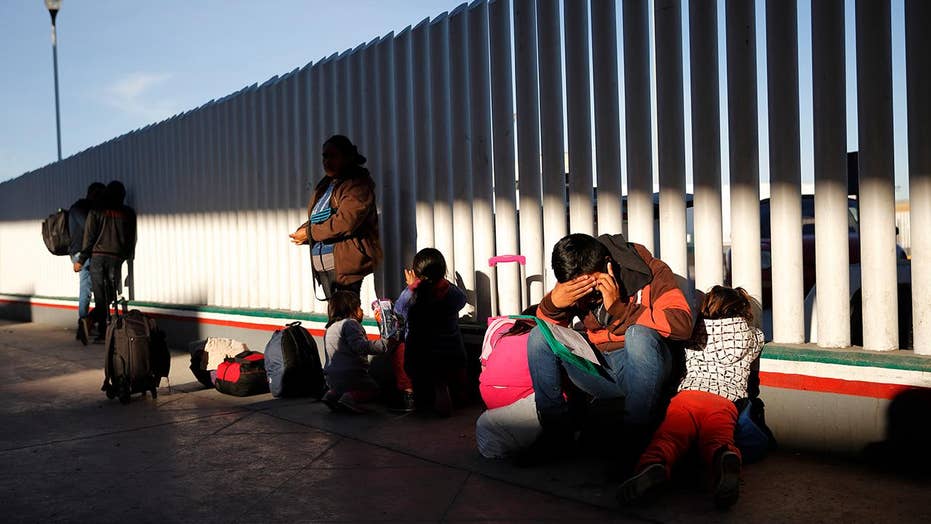 The U.S. will begin telling Mexico how many asylum-seekers will remain behind while their claim is being heard; William La Jeunesse reports from Tijuana on the new policy.

As a former Department of Homeland Security (DHS) special agent on the southern border who fought sex trafficking for over a decade, I can say with certainty that the issue of the border wall should be not about power and partisan politics. It should be about the children – the tens of thousands of them who have been and are being trafficked into the U.S. and forced into the commercial sex trade.

Human trafficking is the fastest growing criminal enterprise on the planet, with millions of child victims stuck in its clutches. Indeed, this is no peripheral issue – this alone should be front and center in our border and immigration debate.

I spent over 12 years working as a special agent/undercover operator for Homeland Security Investigations in the Child Crimes/Child Trafficking unit. For a decade of that service, I was stationed at the border office in Calexico, California. Based on my extensive experience fighting transnational crime along the southern border, I know that we should absolutely finish building the wall for the sake of the children.

Not long ago, a 13-year-old girl from Central America – let’s call her “Liliana” – was kidnapped from her village, then trafficked into the U.S. at a location where there is no wall or barrier. From there, she was taken to New York City, where she was raped by American men 30 to 40 times a day.

The private anti-trafficking organization I founded over five years ago, Operation Underground Railroad, eventually helped Liliana escape her hell, and she is now healing in our care, as she prepares to take on her captors in federal court.

The U.S. is one of the highest, if not the highest, consumers of child sex. As such, traffickers know they will become very wealthy by getting their enslaved children into our country. We do these traffickers a great favor by leaving our border virtually wide open.

We should stop seeing the border wall as something that would keep the “bad guys” out – though it would certainly help do that too. We must instead focus on its ability to prevent children from being brought in to become sex slaves. The wall would undoubtedly be a significant barrier to entrance into the black market of child sex trafficking, thus decreasing kidnappers and traffickers’ incentives in the first place.

For those children who are still kidnapped, the wall would provide hope. Had there been a wall, Liliana’s traffickers would have likely been compelled to try their luck at any given port of entry, which are armed with advanced technology and well-trained officers. In fact, at about the same time that Liliana was trafficked, I was participating in the rescue of a 5-year-old boy, whose trafficker had kidnapped him in Mexicali, Mexico, where there actually was a wall.

Alert officers, using their sharp skills and high-tech monitoring equipment, snagged the American trafficker at the Calexico Port of Entry, rescued the boy, and then identified an entire trafficking network, allowing us to rescue many more children.

This is how it’s supposed to work. Roughly 10,000 children are being smuggled into the U.S. every year to be sold as sex slaves – we owe it to them to finish this wall and protect them from the monsters within.

In light of this, I’ve been distraught to hear opponents of President Trump’s plan declare the wall “immoral.” Curiously, these same opponents have not called for the existing border structures, spanning roughly 30 percent of the southern border, to be torn down.

Well, is a wall “immoral” or not? Is 30 percent moral, but 31 percent is immoral? Their argument quickly falls apart, because walls work and wall opponents know that, or else they would be demanding the “moral” thing be done at long last, and tear it all down.

Without a wall to protect her, Liliana didn’t get to enter America in a way that would have allowed her to experience the promises of the Statue of Liberty. Instead of breathing and living freely with a loving American foster family, she found herself enslaved by American sex predators.

The wall, contrary to President Trump’s adversaries, doesn’t contradict the Statue of Liberty. Rather it protects and preserves everything for which it stands.

“There can be no keener revelation of a society’s soul than the way in which it treats its children,” Nelson Mandela once declared. Today, America finds itself deeply divided over border politics and immigration issues. Though confusion abounds, and “experts” disagree, we only need consult Mandela’s great truth to know what to do next.

Put the children first, and our path forward becomes clear.

Timothy Ballard is founder and CEO of Operation Underground Railroad (O.U.R.), an organization dedicated to rescuing children from sex trafficking.