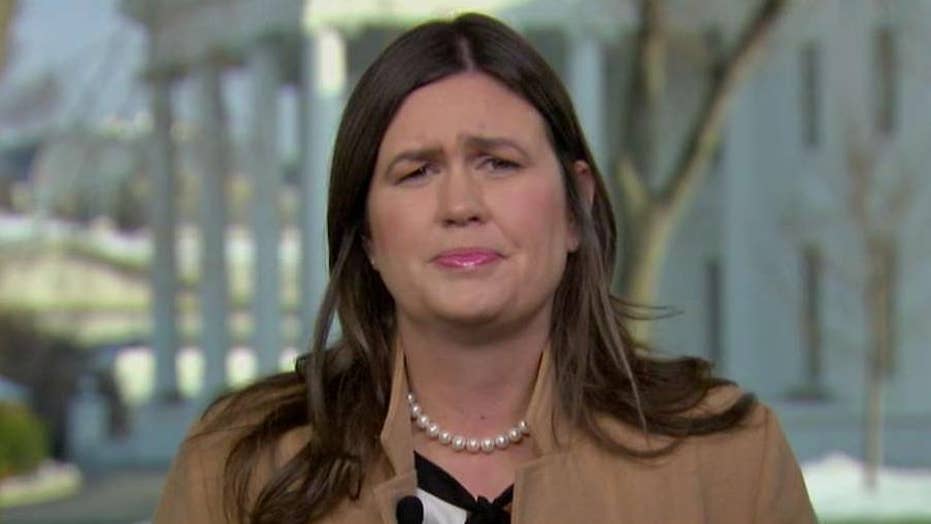 Battle between President Trump and Speaker Pelosi gets heated

President Trump on Monday challenged House Speaker Nancy Pelosi, who has called the White House's proposed southern border wall "an immorality," to explain why she is not insisting on the removal of existing physical barriers, or opposing ongoing construction of new wall projects near San Diego, Calif.

Trump, in a follow-up tweet, asserted that the country needs a "powerful Wall" to deter the incoming migrant caravan that marched freely through the Guatemala-Mexico border last Friday, after the gates were left wide open by officials seeking to avoid a confrontation. The caravan, which consists of approximately 1,000 Central American migrants, was among two groups that "broke into Mexico and are headed our way," Trump said.

"If Nancy Pelosi thinks that Walls are 'immoral,' why isn’t she requesting that we take down all of the existing Walls between the U.S. and Mexico, even the new ones just built in San Diego at their very strong urging," Trump tweeted. "Let millions of unchecked 'strangers' just flow into the U.S."

Pelosi did not immediately respond.

Some progressives in Congress, including Democratic Texas Rep. Veronica Escobar, have claimed this month "we know walls don't work." Escobar, signaling she may support removing some barriers, called walls "ugly" and "monuments to division."

Central American migrants, who received humanitarian visas from Mexico, working for pay as they clean a public sports stadium which is being prepared to use as a shelter for migrants who enter Ciudad Hidalgo, Mexico, on Monday. (AP Photo/Marco Ugarte)

On Sunday, Trump charged that Pelosi -- who has not called for destroying existing walls -- "is so petrified of the 'lefties' in her party that she has lost control" and is now behaving "irrationally" as a result.

The San Diego Union-Tribune has reported that physical barriers, including walling and fencing, encompass approximately 46 miles of the city's 60-mile border shared with Mexico. In February, construction is slated to begin on approximately 14 miles of additional secondary walling, with work to begin on 15 miles of replacement wall this summer.

Earlier this month, in an interview with CNN, Democratic California Rep. Juan Vargas acknowledged that those physical defenses were effective and enhanced security for local residents.

"I mean, you go to the border and you see long lines of people waiting to come in ... So we do have a problem of having huge wait lines to come in,” Vargas told anchor Don Lemon. “You know, there is fencing already there, to be honest with you. There are places where we already have fencing where it made sense for some security.”

However, Vargas insisted, the White House's demand for more border wall funding -- which has led to a legislative impasse and the ongoing partial federal government shutdown -- is unnecessary.

“But now, they want to build out in areas that make no sense at all,” Vargas continued. “And, that’s why I don’t think it will ever be built. I think it is fantasy.”

Trump on Saturday unveiled a plan to offer several immigration-related concessions to Democrats in order to obtain $5.7 billion in funding for a wall.

The president offered Democrats a three-year extension of protections for 700,000 Deferred Action for Childhood Arrivals (DACA) recipients. The offer also would extend protections for 300,000 recipients of the Temporary Protected Status (TPS) program -- which protects immigrants from designated countries with conditions that prevent nationals from returning safely.

Congressional Democrats, including Pelosi, immediately dismissed the proposal as a "non-starter." Pelosi has pledged not to fund the president's border wall under any circumstances, saying earlier this month that "a wall, in my view, is an immorality" and "the least effective way to protect the border and the most costly."

Nevertheless, some high-ranking Democrats signaled that, like Vargas, they remained open to walls in some areas.

On Sunday, House Homeland Security Committee Chairman Bennie Thompson, D-Miss., broke with some of his fellow congressional Democrats by acknowledging in an interview with ABC News' "This Week" that he "would not rule out a wall in certain instances," although he cautioned that the White House needed a better "plan" than simply using a wall as a "talking point."

House Majority Leader Steny Hoyer, D-Md., appeared to side with Thompson's position last Wednesday on Fox News' "Special Report with Bret Baier," arguing that border walls "obviously" work in some areas and rejecting suggestions that barriers should be removed where they already exist.

The No. 2 House Democrat additionally asserted that the question of whether to fund a wall is "not an issue of morality."

"Obviously, they work some places," Hoyer responded, when asked if he favored removing border walls. "But, the president wanted to first build a wall apparently 1,954 miles of -- and he changed that very substantially."

Similarly, Thompson on Sunday questioned whether Trump's funding would go toward an effective wall. "Clearly, Democrats are for border security," he said. "But we are not for this constantly moving the ball just for a talking point."

Democratic leaders previously have supported building border walls. Senate Minority Leader Chuck Schumer, D-N.Y., and other Democrats, including then-Sens. Barack Obama and Hillary Clinton, supported the Secure Fence Act of 2006, which authorized the construction of some 700 miles of fencing at the border. As of 2015, virtually all of that fencing had been completed, according to government figures.

Border Patrol officials also have said that walls are effective.

"We certainly do need a wall. Talk to any border agent and they will tell you that," Border Patrol Chief Carla Provost said on Fox News' "Your World" last month.