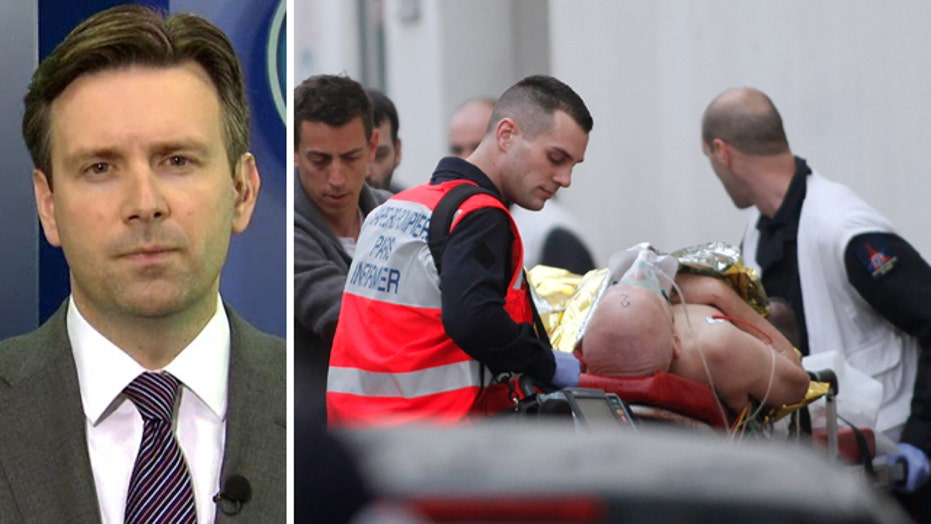 French Muslims trained by Al Qaeda and inspired by the Islamic Caliphate murder seventeen people in Paris. Their announced reason is revenge for the defamation of the Prophet Muhammad. Their battle cry is the Arabic declaration that ‘Allah hu Akbar’ (Allah is the greatest!).

In the aftermath, White House spokesman Josh Earnest briefs the media on how his boss, President Obama, sees the slaughter in Paris.His diagnosis: A deplorable case of “terrorism.”

Reporters notice a missing adjective. Has Earnest forgotten to mention something about the identity of the killers?

No, not at all, Earnest says. He is simply trying to be accurate. He explains (and I paraphrase) that the Paris assassins were just folks who happened to commit mass murder against some journalists (every spokesman’s fantasy—I speak from personal experience) and then, stuck for an explanation, invoked Islam. The proof that this had nothing to do with the Religion of Peace is that it was “roundly condemned by (unnamed) Muslim spiritual leaders.

Not since the hapless Ron Ziegler assured the press that his boss, Richard Nixon, was not a crook, has a White House spokesman been reduced to invoking the, “who-are-you-going- to- believe, me-or-your-lying-eyes,” defense in quite such a pitiful way.

Of course Earnest did this in a good cause—keeping his job. And to be charitable, his boss probably has virtuous reasons for his see-no-evil approach, For one thing, he doesn’t want to insult American Muslims, who are his supporters. For another, he may imagine that he is protecting them from Tea Party pogroms, an abiding, if entirely imaginary, liberal concern.

It is likely that Obama also thinks that his discreet silence about who did what to whom in Paris is a boon the American fight for hearts and minds in the Middle East. If so, he is mistaken.Muslims from Nigeria to Chechnya know perfectly well that he is dissembling. Islam is the world’s leading exporter of political and religious violence. Some Muslims regret it; others see it as the fulfillment of a Koranic duty. Either way, they don’t expect the victims to pretend that the infidel bodies lying dead at their desks in Paris just happened to drop dead. Alibiing for Islam makes Obama come off like Freddo (“Moe didn’t mean nothin’ by slapping me around, Mikey, he’s a good guy. He’s sorry, right Moe?”) Corleone. Like Freddo, Obama can be bullied into silence and appeased by insincere apologies.

Just how insincere was evident a few days after the Paris massacre when the editors of Charlie Hebdo, in an act of startling courage, put another “offensive” cartoon of Mohammed on the cover of their magazine. Suddenly, it was back to yesterday in the House of Islam.Churches were torched by the faithful in Mali.Wild anti-Western rallies took place from Chechnya to Nigeria. The free-speech loving Imams and Ayatollahs of Josh Earnest’s imagination incited worshippers with cries of blasphemy and holy war. The New York Times, house organ of the Obama administration, responded by not publishing the caricature because “some readers” (unspecified) might be offended.

Such weakness is entirely transparent to the Muslim world—not only to the jihadis themselves, whose ranks are swelling with every attack but to their countless millions of admirers, apologists and silent supporters.

It is also completely clear to Israel.

For two years, Obama and Secretary of State Kerry have relentlessly and futilely tried to convince Jerusalem to withdraw from the West Bank and agree to the creation of a Palestinian state. The plan has been on life support for months; it died—at least for the duration of the Obama administration--in the kosher supermarket where four Jews were shot dead by a gunman inspired by the (non-denominational!) Islamic Caliphate of Iraq and Syria. The killer dedicated the job to the Palestinian people. The victims were buried in Jerusalem partly because their families feared their graves would be desecrated in France.

The funerals coincided with the start of the election season in Israel. Prime Minister Netanyahu, running for a fourth term, is implacably opposed to making concessions to the Palestinian Authority, one of whose components, Hamas, is a branch of the M-word Brotherhood. Obama has made it clear that he would like Netanyahu to lose. This is a good thing for the Prime Minister. Even the left understands that there can be no deal backed by an American Godfather who is who is scared of Moe Greene.