Eric Shawn: Climate, COVID and China at the UN

While President Joe Biden’s remarks at the U.N. during Climate Week were all about climate and green energy, his actions don’t hold up.

As president, he's focused more on unilateral green policies that will hamstring the American economy while giving the world's biggest polluters a free pass.

Consider the Paris Climate Agreement. As I said under the Obama administration, this agreement was doomed to fail from the start—with no means of enforcement, sustainability or legal significance.

SENS. INHOFE & HYDE-SMITH: DEMS' PUSH FOR ERA – IT'S NOT ABOUT EMPOWERMENT. HERE'S WHAT'S REALLY GOING ON

President Donald Trump made the right decision by withdrawing from the job-killing deal altogether. Not only has the Biden Administration taken steps to rejoin the Paris Agreement, but it nearly doubled the Obama-era emissions reduction commitment—all the while leaving American taxpayers in the dark about how it will be done.

That’s why I’ve been holding the Biden administration accountable for its lack of transparency around this commitment, and particularly, what burdensome and costly regulations are needed to meet its goals. I do not understand why President Biden won’t hold the world’s largest polluters like China, Russia, and India to the same standards he wants to impose by executive fiat on the American people.

Washington Democrat’s climate policies are not about the climate. They are, and have always been, about controlling our lives.

Earlier this year, I introduced the Domestic Manufacturing Protection Act, which would prevent the Environmental Protection Agency from issuing any new greenhouse gas emission rules or regulations until China, India, and Russia each adhere to the same emission reduction targets that we impose on ourselves.

We shouldn’t be in this deal in the first place, but we especially shouldn’t let those countries off the hook while at the same time President Biden imposes a regulatory nightmare on the American people. 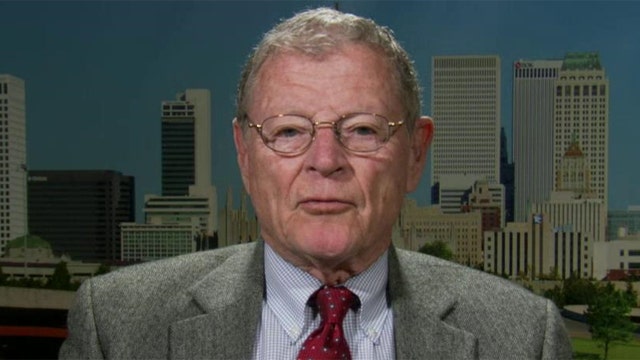 Another example: last month Biden was pleading with OPEC to pump more oil as a way to reduce high gas prices. It is astonishing that this administration is seeking assistance from an international oil cartel while America has sufficient domestic supply and reserves to increase output which would reduce gasoline prices.

I led a number of my Senate colleagues in writing a letter to President Biden making it clear that the best and most effective way to reduce the cost of gasoline at the pump is to unleash clean, affordable, and reliable American energy. While I agree with the intent to reduce the cost of gas for hardworking Americans, Biden's domestic policy agenda has proven to have the opposite effect and continues to threaten American jobs and family budgets.

Oklahomans certainly haven’t forgotten about the rest of President Biden’s terrible record on energy and climate—like the cancellation of the Keystone XL pipeline and its associated 10,000 jobs, the suspension of oil drilling leases in the Arctic National Wildlife Refuge, and his unprecedented tax increases he and congressional Democrats have proposed in their partisan Budget Reconciliation package.

The reality is Washington Democrat’s climate policies are not about the climate. They are, and have always been, about controlling our lives. While his climate change talking points may sound appealing to some, it will not result in the climate benefits he promises and it will come with a high economic and lifestyle cost on Americans that would be historic in its implications.

We don’t need more regulation in Washington. We need to get back to cutting regulations and unleashing this economy just as we did under the previous administration.

I continue to call on President Biden to reverse his regulatory agenda and targets on America’s domestic energy sector before it’s too late. Oklahomans—and all Americans—deserve better.