Hillary Clinton, who’s never met a camera or a microphone she didn’t like, hinted over the weekend that she may run for president again in 2020. After all, the third time is a charm – or a strikeout, depending on your perspective.

While Clinton said she doesn’t want to run, she also said that "I’d like to be president.” If you’ve been paying attention at all since she first sought the Democratic presidential nomination in 2008, you undoubtedly know that much.

“The work would be work that I feel very well-prepared for,” Clinton said, “having been in the Senate for eight years, having been a diplomat in the State Department.”

LAUREN APPELL: IS THE LEFT’S BIG BLUE ELITIST BUBBLE HURTING ITS CHANCES FOR A BIG BLUE WAVE IN 2018?

You can almost see the collective face palms from Democrats. Even the Democratic Party, which is in so much disarray it resembles a malfunctioning compass with its lack of direction, can see Clinton has overstayed her welcome.

Clinton’s adviser Philippe Reines said earlier this month that “it’s curious why Hillary Clinton’s name isn’t in the mix – either conversationally or in formal polling – as a 2020 candidate.”

Is it really that curious that Clinton’s name isn’t in the mix? That is until she accidentally on purpose put it into the mix over the weekend. 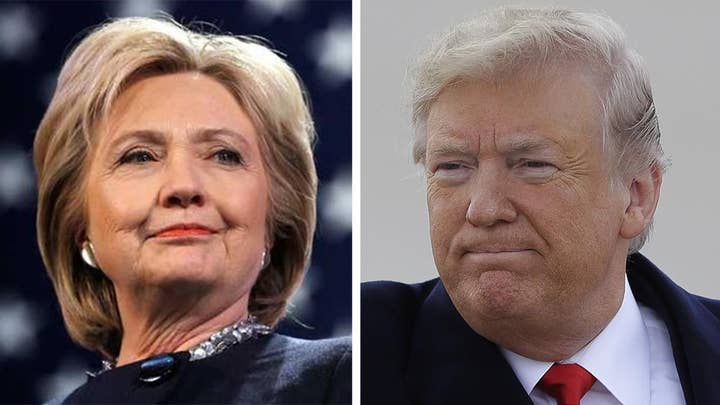 Clinton ran and lost to then-Sen. Barack Obama in the 2008 Democratic presidential primaries and then came back for a do-over in 2016 when she won the Democratic nomination to run against Donald Trump.

Nearly every poll assured Clinton that 2016 was going to be her moment to make history by becoming America’s first female president. She and her friends in the media were confident she’d finally move into the Oval Office. It was a no-brainer.

Clinton was so confident that in October 2016 she already had an election night fireworks spectacle scheduled to go off over New York’s Hudson River to celebrate her presumed victory.

But in the end, the only fireworks that happened were after the final votes came in – and they weren’t over the Hudson River.

It turned out that opinion polls don’t equal votes cast at the actual polls. And though the media may work hard to influence voters, they do not elect our presidents.

Not only did Clinton lose, but during an election where gender was the centerpiece of her campaign to enter the all-male ranks of U.S. presidents, she won only 48 percent of the votes of white women.

That had to hurt. Why and how did that happen?

The problem was that Clinton ran a gender-based campaign that wrongly assumed women would blindly follow their chromosomes into the voting booth, no questions asked. But women are smarter than that.

President Obama handed Clinton an ideal platform from which to run for president, making her secretary of state soon after he took office. But Clinton failed miserably at that job.

That failure culminated in Clinton’s refusal to send more security to protect our ambassador to Libya, Christopher Stevens – despite numerous requests – leading to his death, along with the deaths of three other Americans, in the Benghazi terrorist attack. She then lied about that attack and said it was caused by an anti-Muslim video.

Women aren’t stupid. Many of us decided right then and there that Clinton was eminently unqualified for the Oval Office.

Though she lost the election in 2016, Clinton never gracefully faded into the background like most losing candidates. Instead, she hung around and reminded us why she lost as she repeatedly told us we’re to blame.

I was one of those 52 percent of white women who didn’t vote for Clinton. I have never felt sorry for a minute about it.

When things didn’t go Clinton’s way, we heard what has amounted to two years of lame excuses.

Earlier this year, Clinton insulted women who didn’t vote for her, essentially telling us we’re too stupid to think for ourselves, and we caved to the “ongoing pressure to vote the way that your husband, your boss, your son, whoever, believes you should.”

On a separate occasion, Clinton played the victim, telling a crowd in Australia that “there is still a very large proportion of the population that is uneasy with women in positions of leadership.”

Clinton has already lost twice in her presidential campaigns. If she wants to run again, she’s going to have some serious fence-mending to do for the last two years of insults she’s been hurling at people, particularly women, who didn’t vote for her.

Better get busy. Clinton has already written a book and a traveled around the world on a blame tour. If she wants to win back votes she may want to try an apology tour.

While in India earlier this year, Clinton essentially called Trump supporters racists, sexists, and bigots. Here’s how she explained the meaning of President Trump’s Make America Great Again message: “You know, you didn't like black people getting rights; you don't like women, you know, getting jobs; you don't want to, you know, see that Indian-American succeeding more than you are.”

How racist and sexist is that? And are we really supposed to believe that most female voters “don’t like women, you know, getting jobs?” Those Trump supporters, what a basket full of Deplorables!

In fact, since President Trump took office the unemployment rate for African-Americans dropped to an all-time low and unemployment for women is the lowest it’s been since the 1950s.

Perhaps Clinton should take inventory of her own house. Last week during a Q&A session with Recode, after talking about not being rude and insulting people, she made a completely inappropriate, racist “joke” that went wildly unreported in the mainstream media.

Had a Republican said that it would have been the lead story on every mainstream media news organization, institutions would be canceling any scheduled speaking engagements and there would be calls for books to be pulled from store shelves.

Hillary and former President Bill Clinton recently announced they are launching a speaking tour this year. Smells a lot like round three of the Hillary show is about to go into production for 2020.

Hillary Clinton has put a lot of energy in promoting her book “What Happened?”

The answer to that question is obvious. What happened is that Clinton lost because she was a bad candidate.  If she’s really serious about actually winning, perhaps she may want to point her finger back at herself and ask “What’s changed?”

I’d hedge my bets that the answer is absolutely nothing.

Republicans would love to see Clinton run against President Trump again. To the GOP she is the gift that keeps on giving. To Democrats she is an incessant pain that, nevertheless, may persist.