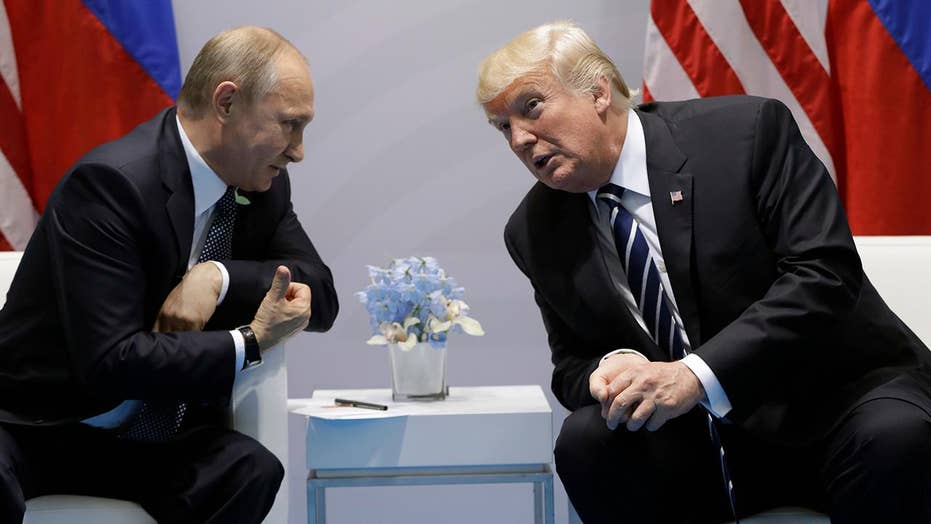 Election meddling in focus as Trump readies for Putin summit

President Trump can have a successful summit Monday with Russian President Vladimir Putin in Finland and outwit his critics if he takes a tough-love approach to his seeming bromance with the Russian leader.

Putin’s hold on power is weaker than it seems. He takes strength from the perception by some that he has President Trump in his pocket – yet he still needs a foreign enemy to justify his police-state rule.

American elected officials have provided Russian leaders – and Soviet leaders before them – with a needed foreign enemy for many years. However, U.S. hostility has failed to alter Moscow’s behavior or make America any safer.

Most importantly, neither isolation nor sanctions have hindered Moscow’s ability to kill millions of Americans in a horrific attack with an arsenal of nuclear bombs second in size only to our own. In addition, Russia is covering up past support for global terrorist networks.

On top of this, Russia still seeks to subvert our political institutions and elections – as it has for many decades, long before Donald Trump entered the political arena.

Now President Trump has the opportunity to deprive Putin of the foreign enemy the Russian president needs to unify his country behind his iron-fisted rule. But Trump will have to walk a tightrope to not get too cozy with Putin in order to dispel the “collusion” narrative that plagues his presidency.

Special Counsel Robert Mueller continues to investigate whether anyone on the Trump presidential campaign colluded with Russians to help elect Trump in 2016. On Friday a grand jury working with Mueller indicted 12 Russian military intelligence officers accused of hacking emails of Hillary Clinton and the Democratic Party during the campaign.

The steps outlined above will set Trump apart from the discredited foreign policy establishment. Putin is unlikely to go along, but they would offer the Russian president a new and positive relationship based on hard-nosed realism.

Some of President’s Trump’s political opponents have urged him to cancel Monday’s summit with Putin to protest the Russian interference with our 2016 elections. Trump has refused, and he’s made the right call. Backing out of the summit at the last minute, when he is already in Europe, would make the American president look like he is fearful of a meeting with Putin and is running away.

The indictment of the Russian intelligence officers is all the more reason for President Trump to give Putin a blunt, in-your-face warning about future Russian meddling in U.S. elections.

President Trump can simultaneously give Putin a positive challenge while discrediting the policy elites who spread and really believe the collusion narrative. He should focus on three areas: election interference, nuclear weapons and terrorism.

The indictments of the Russian intelligence officers Friday provide the perfect background for President Trump to put Putin in his place for subverting America’s political process. Trump can challenge Putin to work with him to resolve this issue once and for all – while putting Trump’s domestic opposition on the total defensive.

President Trump’s critics would have us believe that Moscow’s interference in the 2016 elections was unusual. But that’s not true. In fact, Russian meddling in America’s election in 2016 was actually small-scale compared to the past.

President Trump should challenge Putin to expose all of Moscow’s subversion of American elections and American society since the establishment of the Soviet Union a century ago. Trump should then call for a full-scale independent U.S. investigation. Such a call by the American president would wreck the collusion narrative.

Trump should remind Putin that two can play the subversion game. Putin runs a dictatorship because his centralized regime has little legitimacy and because the gigantic Russian Federation is fragile. Russia is rife with regional autonomous and separatist movements that would like to break out from under Moscow’s rule.

If Putin can subvert the U.S. and its allies, what is to stop the U.S. and NATO from subverting Russia? It worked to dismantle the Soviet Union. It can work again.

President Trump can let Putin know that he can avoid such trouble if he stops subverting the West and hands over the Soviet archives documenting past subversion of the NATO democracies. We can’t turn back the clock on past Russian subversion and interference in our elections. We can do more to stop it in the future.

President Trump’s critics have voiced few objections to Russia’s nuclear weapons modernization. Some even facilitated it. The president should note that publicly. He should then ask Putin why Russia is pursuing its reckless and expensive nuclear weapons programs in the midst of the demographic collapse of the Russian people.

Trump should remind Putin that the last time Moscow upstaged the American nuclear arsenal the U.S. responded with an expensive modernization of its own, which helped collapse the Kremlin-run economy and end the Cold War.

The robust strategic modernization and national missile defense that President Trump has called for in his 2017 National Security Strategy could hasten Russia’s economic collapse, while rejuvenating the American defense industrial base.

Putin, of course, wants to avoid his country’s economic collapse. Trump can help Putin avert that by persuading the Russian leader to dismantle the nuclear weapons that threaten us most.

Moscow can never be a trusted partner against terrorism until it comes clean on the Soviet-sponsored global terror network, much of which remains. That includes Russian support for jihadist terrorists in the Middle East.

President Trump should ask Putin to declassify all Soviet-era documentation about the nation’s involvement with international terrorists, and help the rest of the world clean up the mess.

The steps outlined above will set Trump apart from the discredited foreign policy establishment. They will offer Putin a new and positive relationship based on hard-nosed realism. Putin is unlikely to go along, but President Trump should do his best to persuade him, using the lessons he shared with the world in his book “The Art of the Deal.”

We need to be realistic about the outcome of the Monday summit. We shouldn’t expect any dramatic breakthroughs in a few hours of talks, but important progress could be made that could lead to major steps forward in the future. Trump calls Putin his competitor. One always keeps one’s competitor on the defensive.