As if all 9 zillion 2020 Democratic presidential candidates don’t have enough problems – promising to take away your health care, free college for all, open borders – they now have a new line of attack against President Trump: criticizing his national security credentials.

You must be joking.

Not only have the Democrats not learned the lessons of the past – lurching left and promising everything free under the sun doesn’t work out well for them – but now they think they offer a better vision for America’s place in the world, what our role should be internationally, while trying to label President Trump’s approach of America First in a negative light. 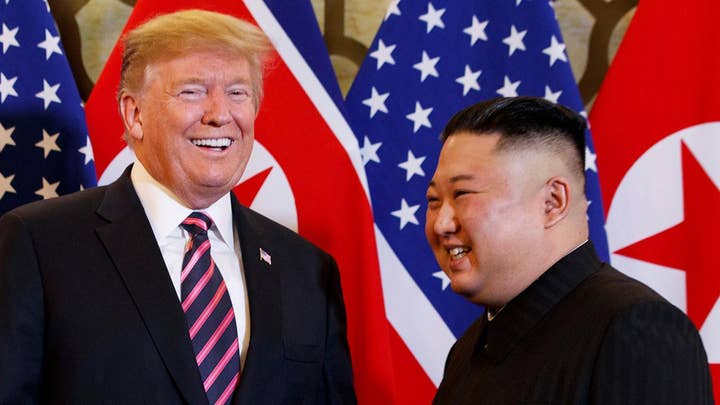 Take for instance a recent interview by former Vice President Joe Biden to CNN, where be declared that Trump is “[E]mbracing thugs. He's embracing Kim Jong Un, who is a thug. He's embracing Putin, who is a – who is a flat dictator. He's embracing people who, in fact – and he's stiff-arming our friends. He's threatening NATO, to pull out of NATO. I mean, come on.”

But Biden did not stop there. “If he wins re-election, I promise you there will be no NATO in four years or five years.”

And these remarks only scratch the surface when it comes to rants over what are clearly Trump’s foreign policy successes. Democrats are, in fact, opening themselves up for attack, trying to take on the president in the area of national security.

Here’s why: Agree or disagree on the policy choices, Trump has taken on the hard problems while staying true to his promise to the American people that he would put their interests first. This is something the Obama administration failed to do time and time again.

Russia? Let’s take the wind out of the sails of the Democrats’ favorite national security topic for the last two years, because the record here is clear: No one has done more to contain and diminish the threat coming from Russia than President Trump (except perhaps Ronald Reagan).

Agree or disagree on the policy choices, Trump has taken on the hard problems while staying true to his promise to the American people that he would put their interests first.

From rebuilding our nation's military, to increased economic sanctions to arming Ukraine and working to ensure NATO members put the money they need into their military budgets, Trump has ensured that Moscow knows America will not sit idle if they decide to launch another foolish cyber-attack on our election system or strike a sovereign nation and annex their territory. Quite simply, Trump is trying to deter Russia from making trouble before it starts – and that’s a smart strategy.

North Korea? Perhaps the greatest national security crisis of our time, thanks to President Obama and Joe Biden. Their policy of strategic patience – or what I like to call strategic appeasement – was nothing more than Team Obama avoiding a difficult problem, one with no easy solution that nearly every president before wanted to avoid or neglect. What that “strategic patience” got us was eight years of Pyongyang laying groundwork for deadly hydrogen bombs that can now be placed on long-range missiles that can hit the U.S. homeland.

Trump did not cower in the face of the challenge but took North Korea on even before he became president, calling them to task on Twitter. He then placed tough economic sanctions on the regime but also honored his campaign promise to talk to Chairman Kim Jong Un and open a dialogue to lower tensions. Imagine if President Obama had done the same back in 2009 when he took office? Wasn’t it then-candidate Obama who said he would talk to our enemies? So, what happened?

And let’s not forget China. While the foreign policy geniuses here in Washington would tell you Beijing’s rise is inevitable and that we should accommodate it – while they steal our intellectual property, trillions in dollars of military secrets and even 20 million government personnel files – Trump had different plans. He not only has called out China’s mercantilist trade practices but imposed tariffs on Beijing when the New York banking elites and Wall Street fat cats said it was financial suicide. And while we don’t have a trade deal just yet, one thing is clear: Beijing finally knows America must be taken seriously and that the days of unfair trade practices are long gone.

And finally, NATO. Yes, the president has been very clear that our allies must ensure they are paying at least 2 percent of their GDP on defense spending – the amount all NATO nations have pledged to do. This has been something Trump has been relentless on, calling NATO nations to task even during NATO meetings with the whole world watching – and making the elites cringe in the process. And lo and behold, NATO has begun spending more on its common defense, as in $100 billion more in allocated funds by the end of the year. That is something President Trump can take credit for, as Europe’s defense is now in much better shape thanks to his tough-love approach.

While I could go on and on, there is a clear pattern here: regardless of whether you like his policies or the way Trump goes about them this administration is not afraid to tackle the hardest national security challenges – the challenges the mainstream media, pundit class, and the previous administration decided were just too tough to tackle.

Trump has not only proved them wrong but delivered for the American people time and time again.

So, I say let the Democrats run on national security in 2020. It won’t work out well for them.