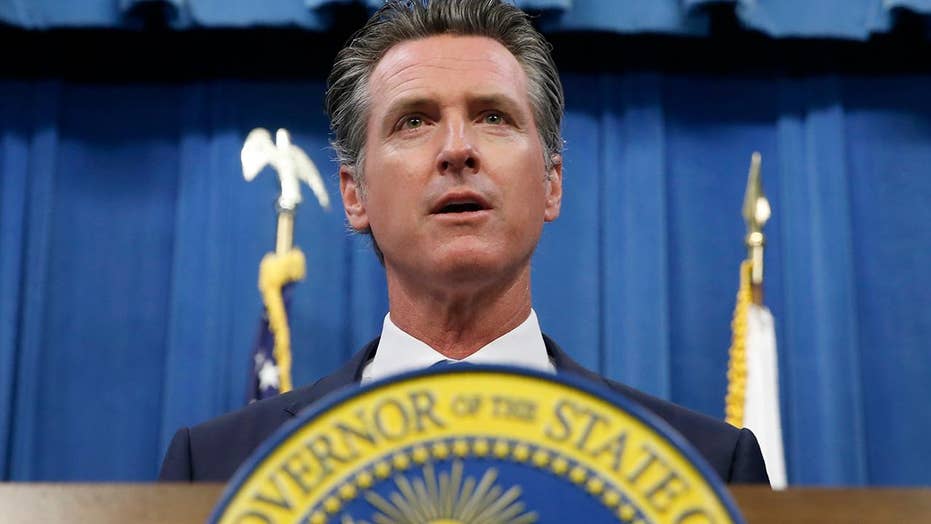 California accused of denying millions of Americans the right to vote for Trump; Todd Piro reports.

California’s Democratic governor and Legislature don’t believe the state’s voters should have the right to decide who they want to be president of the United States. So in a blatantly unconstitutional move, the Democrats have enacted a law specifically designed to keep President Trump off the state’s March 2020 presidential primary ballot.

The new law says that candidates for president and governor in California must disclose their tax returns in order to appear on the primary ballot next year. President Trump has not released his tax returns and no federal law compels him or any other American to do so.

This stunning and unprecedented assault on democracy by what should properly be called the Undemocratic Party would make it impossible for Trump to win a spot on California’s November 2020 general election ballot and would hurt Republicans in down-ballot races as well.

If the California law is allowed to stand, a fringe candidate with no chance of becoming president could win the Republican presidential primary with only a small number of votes – and the duly elected president of the United States could be kept off the ballot.

My law firm – representing the Republican National Committee, the California Republican Party and three Trump-supporting Republican voters – has filed a lawsuit to overturn the California law as quickly as possible to ensure California’s Democrats won’t get away with their attempt to hijack the election. Four other lawsuits have been filed seeking the same result.

We believe the law is firmly on our side. A state government cannot simply do an end-run around the Constitution to add requirements for the office of president of the United States, as California Democrats have done.

This absurd and outrageous move would set a terrible and dangerous precedent if it is allowed to stand.

Under the U.S. Constitution, the qualifications for anyone to become president are that the person must be at least 35 years old, a natural-born citizen of the United States, and a resident of the U.S. for 14 years.

But if the California law is allowed to stand, all 50 states could enact different sets of qualifications for presidential candidates to get on primary ballots, in order to knock out particular candidates.

Democrats want as many down-ballot races as possible to exclude Republican candidates, with only two Democrats running against each other.

The effect of California’s cynical tax-return disclosure scheme on both down-ballot races and the all-important Proposition 13 tax battle only reiterates the importance of getting California’s unconstitutional ballot law overturned.

The California Presidential Tax Transparency and Accountability Act of 2019, signed into law last month by Democratic Gov. Gavin Newsom, says that candidates have to hand over five years of income tax returns in order to appear on California’s partisan primary election ballots.

Trump-hating Democrats say the law is needed to enable the public to see President Trump’s tax returns, which Democrats fantasize would reveal a mythical El Dorado of dirty secrets about him.

That a Democrat-dominated state Legislature would alter California’s election laws to attempt to gather opposition research against a Republican president is bad enough on its own, but there is an even more cynical and shameless motive at play.

It’s now clear that Newsom and his party are hoping that, by keeping Trump off the Republican ballot in March’s primary, they’ll be able to save money and not even have to contest many races in the 2020 general election.

Together with a so-called “jungle” primary system that the same Democrat-controlled state Legislature put in place in 2010, a modest drop in turnout could dramatically increase the number of races where no Republican makes it through to the general election. Under the “jungle primary” system, candidates from all parties are on the primary ballot, with the top two vote-getters moving on to the general election ballot.

Democrats want as many down-ballot races as possible to exclude Republican candidates, with only two Democrats running against each other. This would ensure Democrats would maintain their majorities in the California Legislature and U.S. House delegation.

Such one-party elections are antithetical to all principles of electoral fairness as they are to the Constitution, disenfranchising all but Democratic voters, whose choice will be between candidates on the left and far-left.

What’s more, an important issue on California’s primary ballot will be reconsideration of the “third rail” of California politics – partial repeal of Proposition 13. This is California’s famous 1978 voter initiative that put an end to most property tax increases during the ownership of the current owners, delaying reassessment until properties change hands.

The state’s Democrats have been itching for a generation to repeal the law, and they have finally qualified a measure that would allow tax increases on commercial and industrial properties every three years, likely generating billions of dollars annually in additional taxes for pet Democratic projects.

The Democrats are hoping that many Republican voters will stay home on Election Day if President Trump isn’t on the ballot as the Republican nominee. This would be an unprecedented dirty trick for the ages, railroading through a massive property tax increase. More business owners and taxpayers will leave the state, and its steady decrepitude will inexorably progress.

California’s new ballot law runs roughshod over the First Amendment’s free speech and free association protections, in effect telling California Republicans who they can and cannot choose to represent them at their own party’s national convention.

Fourteen percent of the Republican National Convention’s delegates are chosen in California, but California’s Democrats believe they have the right to decide by legislative fiat who California Republicans may vote for.

President Trump is enormously popular with Republicans across the country, and his only expected primary challengers are protest candidates who would have no chance of beating him in a primary in California or any other state where he is on the ballot.

Even former California Gov. Jerry Brown – a highly partisan far-left Democrat who unsuccessfully sought his party’s presidential nomination in 1976, 1980 and 1992 – recognized the unconstitutional nature of the bill Gov. Newsom signed into law to keep Trump of the primary ballot.

In 2017 then-Gov. Brown vetoed an essentially identical bill after his own nonpartisan Office of Legislative Counsel warned state legislators that the legislation “would violate the qualifications clause of the United States Constitution.”

Newsom’s willingness to disregard the Constitution and embrace partisan pandering driven by Trump Derangement Syndrome is very likely to be struck down in the courts.

But the entire sordid attack by California Democrats on democracy itself emphasizes the need for Americans to remain vigilant against a California government that is increasingly more interested in appeasing a rabid #resistance base than adhering to the principles of the Constitution.