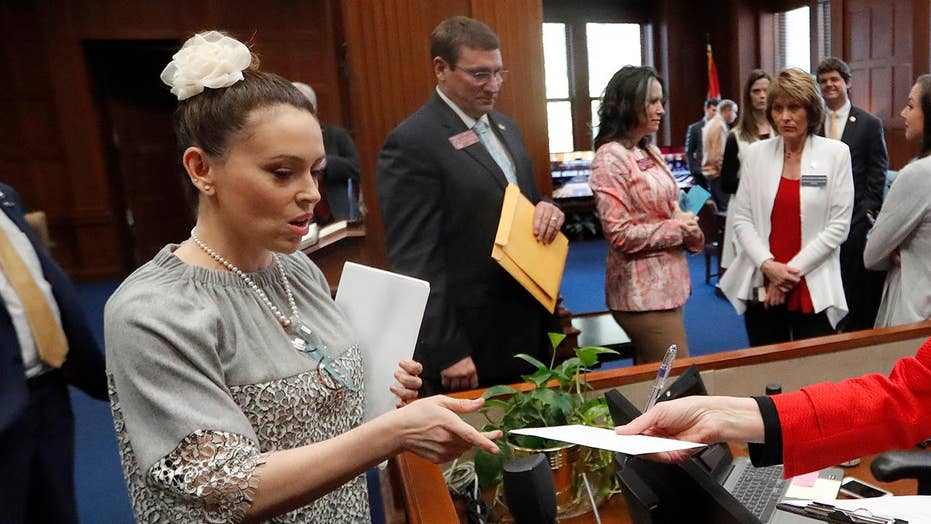 Georgia pushes back on celebrity boycott over 'heartbeat' bill

On Tuesday, Georgia Gov. Brian Kemp signed the Living Infants Fairness and Equality (LIFE) Act into law, sending a clear message to many pro-abortion opponents in Hollywood and Washington that their intimidation tactics have failed.

The bill, also known as HB 481 or the “heartbeat bill,” would outlaw abortion once a child’s heartbeat is detected in the womb — usually between six and eight weeks’ gestation.

Though other states have passed similar legislation recognizing the sanctity of unborn life, HB 418 has received unparalleled backlash from America’s political and social elite.

After the bill passed the state Senate back in March, actress Alyssa Milano launched a petition signed by more than 40 actors who vowed to use their influence to push TV and film production out of the state, dealing a multi-billion-dollar blow to the economy, should the bill pass. About a week later, the Writers Guild of America also threatened to boycott the “Peach State.”

“Such is the potential cost of a blatant attack on every woman’s right to control her own body,” the WGA declared.

Politicians have also used their influence to curtail support for the strict abortion bill.

Democrat presidential candidates Corey Booker and Kamala Harris were quick to voice their opposition to the “extreme” law, and former Georgia gubernatorial candidate Stacey Abrams condemned the pro-life legislation as “abominable and evil.”

Georgia state Rep. Dar’shun Kendrick, a Democrat, responded to the bill by introducing the so-called “Testicular Bill of Rights,” which would require men to obtain consent from their sexual partners before securing prescriptions for Viagra, ban vasectomies, and mandate paternity testing between six and eight weeks of pregnancy, among other restrictions.

The intent of the legislation, which by Kendrick’s own admission is unconstitutional, was to highlight the alleged fact that HB 481 unduly robs a woman of her autonomy, just as her Testicular Bill of Rights would restrict a man’s autonomy. Of course, the key flaw in her reasoning is that HB 481 deals not with women but with the unique rights of their unborn children.

Despite these significant threats and criticisms, Gov. Kemp has stood firm in his support for the legislation.

“I campaigned on signing the toughest abortion bill in the country,” he told The Atlanta Journal-Constitution back in March, “and this is the toughest one we’ve got in the legislature now.”

From day one, Kemp’s message has been clear: Every life is worth fighting for — damn the consequences.

"We cannot change our values of who we are for money. And we’re not going to do that,” Kemp said. “That’s what makes our state great."

It’s tragic that a bill like this is needed, but in a society that unapologetically denies the dignity of the unborn against all scientific evidence and moral reasoning, its passage is a great feat indeed. The bill uses bold language, affirming that “unborn children are a class of living, distinct persons” entitled to “full legal recognition” beyond the “minimum requirements of federal law.”

Gov. Kemp is showing tremendous courage in signing this much-needed bill into law. Few leaders have been so bold in the face of such opposition, and my prayer is that others will be inspired to follow his brave example.

Heartbeat laws are no final solution to our modern culture of death, but by acknowledging and protecting life so early after conception, such legislation obliterates many of the false talking points the pro-abortion camp depends on. Arguments like “my body, my choice,” “a fetus is just clump of cells,” or others that imply maternal supremacy over the child in her womb, are rendered moot once it is established that unborn children are constitutional rights-bearers.

The Hollywood and Washington elites who so aggressively opposed this bill know this better than anyone, and they’re rightly terrified.

Carly Hoilman is a freelance journalist and editor, exploring issues relating to faith, family, education, race, pop culture, and more. You can follow her work on Twitter and Facebook.