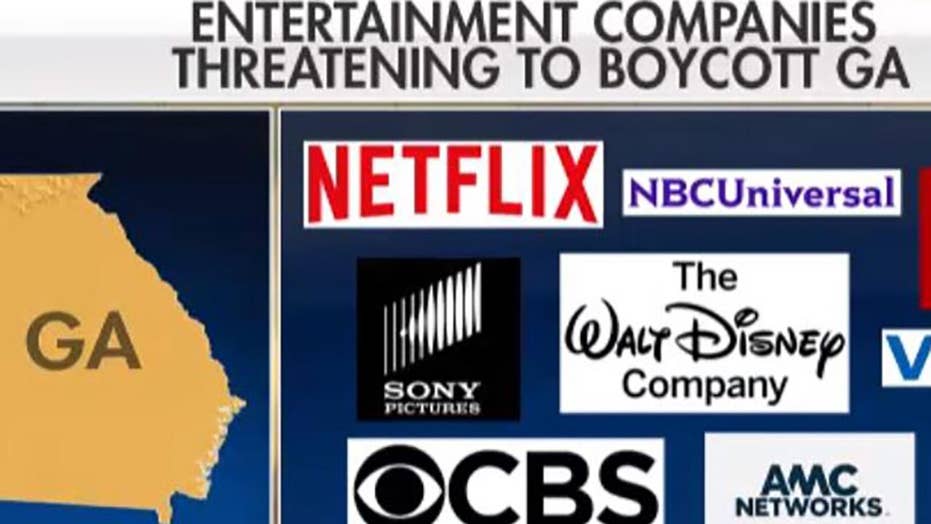 The entertainment industry faces a conundrum as it carries on a widespread temper tantrum aimed at states where legislators acted to protect preborn babies -- raise costs or raise Cain. Currently, threats of economic devastation through loss of jobs and income are being launched at the people of Georgia where a law recently passed limits abortion early in pregnancy, though they are not alone in expressing their pro-life convictions in law.

In response, Hollywood denizens have called for a boycott of the state known to be a cost-effective partner in many media productions. Their message: We won’t come to Georgia to fake kill people in our movies and television shows, unless you kill people for real through abortion.

Georgia is known as one of the best states for filming because of tax incentives that welcome production. The Atlantic reports that the incentives led to ”92,000 jobs and nearly $4.6 billion in wages to the state since 2008.”

Right now, 34 productions are underway in the state, where movies like the "Hunger Games," the Marvel franchise and AMC’s "The Walking Dead" have come to life.

The motion picture industry has profited by a partnership with family-friendly Chick-fil-A investment through Pinewood Atlanta Studios, which is currently engaged in a $1 billion production in the state, providing jobs and opportunity despite possible differences in values. And Georgia is not the only state moved to protect life and to be a friend to the film industry, including Louisiana, Alabama and Ohio.

This indignation aimed at Georgia is rather selectively engaged and misses some important details … like whether the celebrities even have any work going and who will really pay the price for lost revenue.

About boycott supporters, The Wrap reports: “Several prominent producers, like Reed Morano and Judd Apatow, have said they would boycott filming in Georgia in response to the law. Producers David Simon, Christine Vachon, Mark Duplass, Nina Jacobson and Neal Dodson have already boycotted shooting in the state altogether — though none of these was known to have any projects slated for production in the state.”

Mega content creator Netflix, which has produced its blockbuster "Stranger Things" in Georgia, has pledged to pull its business from the state if the pro-life law goes into effect. Meanwhile, mega content producers like Sony Pictures, WarnerMedia, Disney, CBS (and Showtime), and Viacom say they are taking a wait-and-see approach to states that have both welcomed the film industry with friendly policy and dared to also welcome preborn infants.

All of the drama ignores the fact that its people in the entertainment industry who may be hurting the most should a boycott take place. As noted by The Atlantic, “Is it really possible for companies to stand with Georgia’s women by threatening to leave thousands of them jobless?”

For all the angst in Hollywood over Georgia’s concerns for the preborn, where is the anger or advocacy over the entertainment industry’s connections to nations like Saudi Arabia and China, Abu Dhabi, Egypt, Dubai, Jordan and the United Arab Emirates. The human rights issues related to these countries, including simply allowing women to vote or enter into a contract without permission, are long and well documented. Yet Hollywood turns its wrath on the people of Georgia who for a decade have been a friend to the film industry.

It’s rather tone-deaf of an industry that prospers when telling empathetic stories to choose to become cultural bullies. The people of Georgia, acting through their elected officials, welcomed the film industry to the state with tax incentives and accommodation. And they welcomed both mother and preborn child through a new law that respects the humanity of both.

Maybe the entertainment icons should consider that the future of their industry depends on an audience that deserves respect and a chance at the kind of life enjoyed by those lobbying against actors still in the womb.

While even Disney contemplates rejecting the people of Georgia for their support of young families, the words of Walt Disney are worth repeating: “Our heritage and ideals, our code and standards – the things we live by and teach our children – are preserved or diminished by how freely we exchange ideas and feelings.”