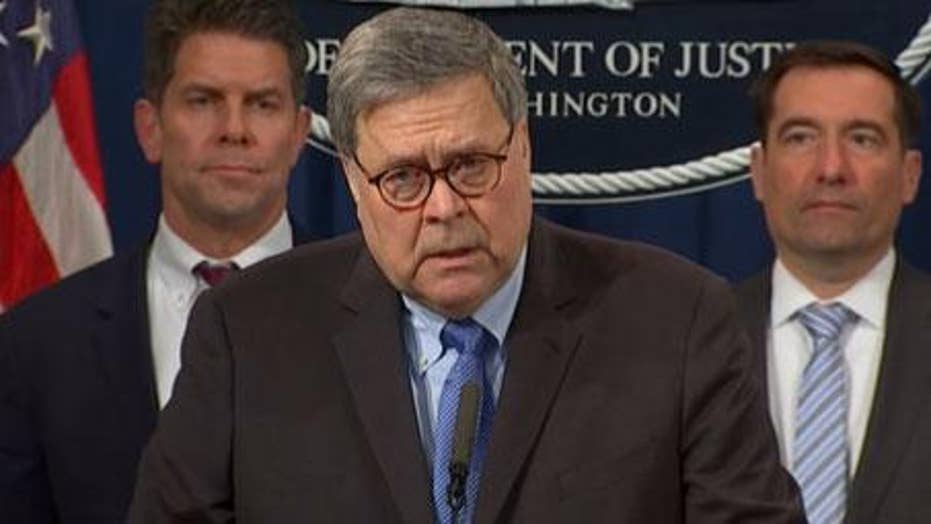 To solve a problem you first have to acknowledge it exists, accepting reality even when it isn’t politically correct. Attorney General William Barr did this Monday when he said the December triple-murder by Saudi Air Force 2nd Lt. Mohammed Saeed Alshamrani was “an act of terrorism.”

This was a dramatic contrast to President Barack Obama’s policy of closing his eyes to reality and absurdly pretending that another mass murder 2009 – by U.S. Army Maj. Nidal Hasan – wasn’t a case of radical Islamist terrorism, when it obviously was.

Barr’s statement was just the latest example of reality-based policies embraced by President Trump, illustrating the president’s determination to see the world as it is, rather than as some would like it to be.

FRED FLEITZ: PENSACOLA NAVAL AIR STATION MURDERS SHOW WHY WE MUST KEEP RADICAL ISLAMIST TERRORISTS OUT OF US

Barr said Monday that an investigation found that Alshamrani was “motivated by jihadist ideology” when the Saudi Air Force officer shot and killed three U.S. sailors and severely wounded eight other Americans Dec. 6 at Naval Air Station Pensacola in Florida.

Alshamrani was shot dead by a sheriff’s deputy responding to his attack, preventing the Saudi from killing and wounding more Americans.

Alshamrani, who was undergoing pilot training at Naval Air Station Pensacola, had a history of airing virulently anti-American, anti-Israel and radical Islamist views on social media. He also showed mass shooting videos at a dinner party the night before the attack. His Islamist motivation for his act of terrorism was crystal clear.

On November 5, 2009, Maj. Hasan – an Army psychiatrist – shot and killed 13 people and injured 30 more at Fort Hood, Texas. Hasan, an American-born Muslim, yelled “Allahu Akbar!”(“God is great” in Arabic) as he fired his gun. His attack ended when he was shot and severely wounded, leaving him paralyzed from the waist down.

Hasan was convicted of 13 counts of premeditated murder and 32 counts of attempted murder in 2013 and sentenced to death. Incredibly, he was never charged with terrorism. His sentencing is now being appealed.

Prosecutors established that Hasan carefully planned this attack and had been in contact via email with Anwar al-Awlaki, a radical Islamic cleric who lived in Yemen at the time, where he was senior leader of Al Qaeda in the Arabian Peninsula.

Several of the 9/11 terrorists attended services at a Virginia mosque near Washington when Awlaki was its iman.  After the shooting, Awlaki called Hasan “a hero” on his website. Awlaki was killed in 2011 by a U.S. drone strike in Yemen.

One would think the U.S. government would have quickly determined the obvious fact that the Fort Hood shooting was an act of terrorism – radical Islamist terrorism, to be precise. Unbelievably, this didn’t happen.

But the real reason Obama did not want to call the Fort Hood mass murder terrorism was that he refused to acknowledge radical Islam is a global threat that inspires its followers to commit acts of terrorism by spreading its violent ideology through the Internet.

U.S. government employees were actually barred from using terms like “radical Islam,” “jihad” and “sharia” during the Obama years. Instead of radical Islamism, the Obama administration used the vague term “violent extremism.”

President Obama stubbornly refused to use the term “radical Islam” through the end of his presidency, because he thought it somehow insulted Muslims or emboldened Islamist terrorists.

Instead, Obama sharply criticized Donald Trump during the presidential campaign in 2016, claiming Trump’s condemnation of radical Islam was un-American, dangerous and driving Muslims who might be prone to radicalization into the arms of ISIS.

Fortunately, President Trump and his administration have rejected Obama’s foolish positions on this issue and clearly named the enemy: radical Islam.

It is ridiculous to say that President Trump’s acknowledgment of reality is somehow a condemnation of all Muslims. The president has close relations with leaders of Saudi Araba and other Muslim nations, and recognizes that the overwhelming majority of the world’s 1.8 billion Muslims are law-abiding citizens and have no connection with terrorism. It is a lie to call the president a religious bigot.

But facing the fact that a tiny percentage of Muslims embrace radical Islamist terrorism is not an act of prejudice – it is simply an act of seeing the world as it is, not in some idealistic vision based on fantasy.

Despite this carnage, President Obama never acknowledged radical Islam was a threat. He never admitted that radical Islamist terrorism represents a global ideology at war with modern society.

Candidate Trump promised during the 2016 presidential campaign that he would reverse Obama’s dangerously naïve views of radical Islam, including with immigration policies to stop importing radical Islamists.

Attorney General Barr’s acknowledgment that the Pensacola shooting was an act of radical Islamist terrorism is another confirmation that President Trump is keeping this important promise. The American people are safer as a result.