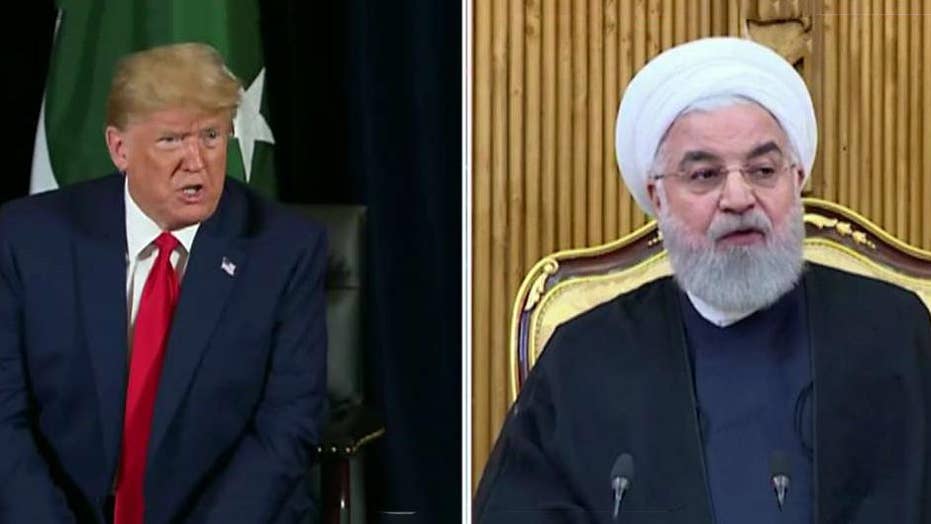 Eric Shawn: Iran in the crosshairs at the UN

President Trump to call for coalition to face Tehran's aggression.

President Trump made it clear in his speech to the UN General Assembly today that he is not backing down on his successful Maximum Pressure campaign against Iran.  He said today "All nations have a duty to act. No responsible government should subsidize Iran's blood lust. As long as Iran’s menacing behavior continues, sanctions will not be lifted. They will be tightened."

But as tensions with Iran reach a fever pitch due to the recent attack on Saudi oil facilities launched from Iran, President Trump’s critics have doubled down on their arguments that he is responsible for a surge in Iran’s belligerent behavior. They argue that the 2015 nuclear agreement (JCPOA) with Iran was a good deal, and that Iran has been complying with it. Congresswoman Tulsi Gabbard, D-Hawaii, insisted this is the case in an appearance on Fox News Channel.

Although these claims are treated as the gospel truth by the media, the evidence is clear – and increasing – that the JCPOA is a bad deal Iran has violated from the beginning.

First of all, the JCPOA is an extremely weak agreement that did little to slow Iran’s nuclear weapons program, has very weak verification and allows Iran to engage in nuclear weapons-related work – such as uranium enrichment and developing advanced enrichment centrifuges – while the agreement is in place. Among other major flaws, the agreement lifted sanctions from Iranian terrorist individuals and organizations and omitted Iran’s ballistic missile program which is widely viewed as a delivery system for Iranian nuclear warheads.

As a result, a majority of the American people strongly opposed the JCPOA in September 2015, when it faced a vote in Congress. Senate Minority Leader Chuck Schumer, D-N.Y., as well as Sen. Ben Cardin, D-Md., and Rep. Eliot Engel, D-N.Y. – the top Democrats on the Senate Foreign Relations Committee and the House Foreign Affairs Committee – voted to disapprove the JCPOA.

Second, Iran has consistently cheated on the JCPOA, even before it was formally implemented. To implement the agreement and receive $150 billion in sanctions relief in January 2016, Iran was required to provide a full and thorough accounting to the International Atomic Energy Agency (IAEA) of its prior nuclear weapons-related activities by the fall of 2015. Although Iran provided a false and incomplete accounting, the Obama administration pressed other IAEA members to close the file on its prior nuclear weapons work and grant Tehran sanctions relief.

The seriousness of Iran’s false answers in 2015 about its nuclear program was made clear in 2018 after Israeli intelligence stole a trove of secret Iranian documents on Iran’s nuclear program detailing nuclear activities that were not declared to the IAEA. This included information that Iran was planning to manufacture five nuclear warheads at 10 kilotons each; conduct an underground nuclear test and attempted to acquire highly-enriched uranium (weapons-grade) from abroad.

Israel also learned from these documents about a warehouse in Tehran containing nuclear equipment and fissile material which had not been declared to the IAEA. The IAEA did not attempt to inspect this warehouse for a year. When it did, Iran refused to cooperate with the investigation.

It is nonsensical to maintain that Iran’s malign and war-like behavior is President Trump’s fault.

Iran has failed to comply with the JCPOA in other ways, principally by refusing to permit inspections of military sites. German intelligence agencies have been reporting for several years covert efforts by Iran to obtain nuclear weapons-related technology in violation of the JCPOA.

Many of President Trump’s opponents base their case that Iran has been complying with the JCPOA because the IAEA and the U.S. intelligence community have said so. These assessments can’t be taken seriously since these organizations refuse to address serious and well-documented instances of Iranian noncompliance like those cited above.

Third, and finally, President Trump’s critics claim Iran’s belligerent behavior is his fault because he withdrew from the JCPOA. There are two major problems with this argument.

First, Iran’s behavior substantially worsened after the JCPOA was announced in mid-2015, including sending troops to Syria, sending weapons – including missiles – to the Houthi rebels in Yemen, stepping up support for terrorism, and increasing military spending. Iran also ramped up its ballistic missile program.

In addition, in response to Iranian assassination squads operating in Europe to kill Iranian dissidents, the European Union imposed sanctions on Iran in January 2019, the first EU sanctions since the JCPOA was implemented. The EU has been considering sanctioning Iran over its ballistic-missile tests.

It is nonsensical to maintain that Iran’s malign and war-like behavior is President Trump’s fault.

Second, to argue that the United States must stay in an agreement because the other party will resort to violence if it withdraws would be a call for Washington to give in to blackmail. This is not how civilized states practice diplomacy.

Iran is currently engaging in blatant blackmail to pressure the United States and Europe to remain in the JCPOA. This includes violating its commitments on uranium enrichment and belligerent acts such as seizing ships in the Persian Gulf, mine attacks, shooting down a U.S. unarmed drone and the Sept. 14 attack on two key Saudi oil facilities.

It is truly appalling to hear liberals try to blame President Trump for acts of violence by Iran or claim that the best way to halt them is for the U.S. to rejoin the deeply flawed JCPOA.

The bottom line: liberal JCPOA critics are desperately trying to save the nuclear deal with Iran by misleading the American people about the agreement and blaming Iran’s increasing belligerence on President Trump.

Americans are not going to be fooled by these arguments. They know the JCPOA is a bad deal and that Iran never ceased its malign activities after it was implemented. They also know President Trump’s sanctions are denying Iran funds it would spend on terrorism, its military and meddling in Middle East conflicts.

Expect the liberal lies about the JCPOA to continue as President Trump’s maximum pressure policy against Iran continues to succeed.