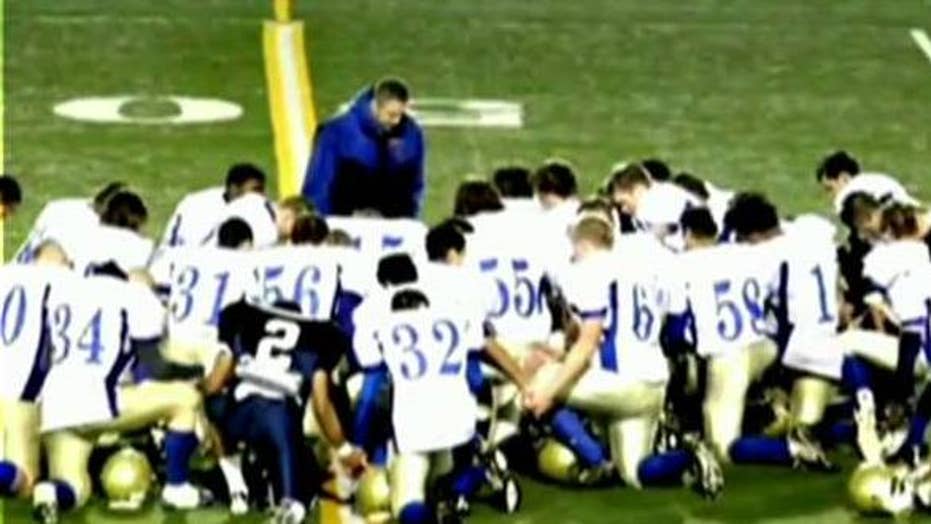 One coach prayed to God. Another coach chanted to Buddha. But only one got punished — the Christian coach.

Joe Kennedy, a beloved assistant football coach in Bremerton, Washington, was suspended on Oct. 28 after he refused to stop his post-game prayers at the 50-yard line.

On Tuesday, he filed a discrimination complaint against the school district, claiming the district did not punish the team’s offensive coordinator for conducting Buddhist chants in a similar manner.

Liberty Institute, one of the nation’s most prominent religious liberty law firms, plans on getting an answer to that question in a complaint filed with the U.S. Equal Employment Opportunity Commission. Liberty Institute is representing Coach Kennedy in his discrimination complaint.

“BSD violated my rights to free exercise of religion and free speech by prohibiting my private religious expression and taking adverse employment action against me on the basis of my religion, notwithstanding my request for a reasonable accommodation that would allow me to practice my sincerely held religious beliefs,” Kennedy wrote in his complaint.

The school district has not commented on the complaint.

“I definitely don’t want to be in this predicament,” Coach Kennedy told me. “I just want to coach football with my guys.”

Kennedy was hired by the district in 2008 and received years of stellar evaluations and accolades for his character building with the team.

In 2009 he was praised for his “enthusiasm and positive attitude.” In 2013 he was noted for doing an “excellent job of mentoring players and building character in them.”

But this year’s review proved to be ominous.

“Do not rehire,” the review stated.

“Mr. Kennedy failed to follow district policy and his actions demonstrated a lack of cooperation with administration,” the review alleged. “The subsequent situations contributed to negative relations between parents, students, community members, coaches and the school district.”

The review even alleged that Coach Kennedy failed to supervise students after football games “due to his interactions with media and community.”

That review devastated the former Marine.

“It was like a knife in the heart,” he said. “They don’t want me to coach any more.”

Michael Berry is the Liberty Institute attorney assigned to the case. He told me the evaluation is an act of retaliation by the school.

“We provided copies of previous reviews which are all glowing,” Berry said. “They talk about what a wonderful coach he is. It’s like getting straight A’s and then getting an F. Obviously, there is something more to this.”

Liberty Institute said the school is guilty of three separate acts of discrimination — the first being the policy banning Coach Kennedy from his post-game prayers. They also took issue with the suspension of the coach as well as the negative performance review.

Coach Kennedy began the post-game prayers when he was hired in 2008. Kennedy had been inspired to do so after watching the faith-based film, “Facing the Giants.”

It wasn’t long before students noticed the coach’s actions and soon they began to join him. It was entirely voluntary and at no point did the coach personally invite players. It truly was an organic prayer movement.

Not only did they ban the coach from praying, they went so far as to ban him from taking part in student-led prayers. They also ordered him to avoid kneeling or bowing his head during student-led religious activities.

I asked the coach why he decided to defy the school district. Why didn’t he just comply with their demands and stop the post-game prayer. His answer should inspire and embolden every patriot in the nation.

“It largely has to do with me being a Marine and a veteran — fighting for the constitutional rights of all Americans,” he said. “I still believe in America being home of the free and the brave. I haven’t seen that lately. We constantly back down because someone could be offended. But that’s not the American way. We talk about practicing tolerance and acceptance and diversity yet we are not living up to that. As an American, I can’t sit by and let that happen.”

Coach Joe Kennedy is giving all of us a lesson in character building -- doing the right thing regardless of the outcome.