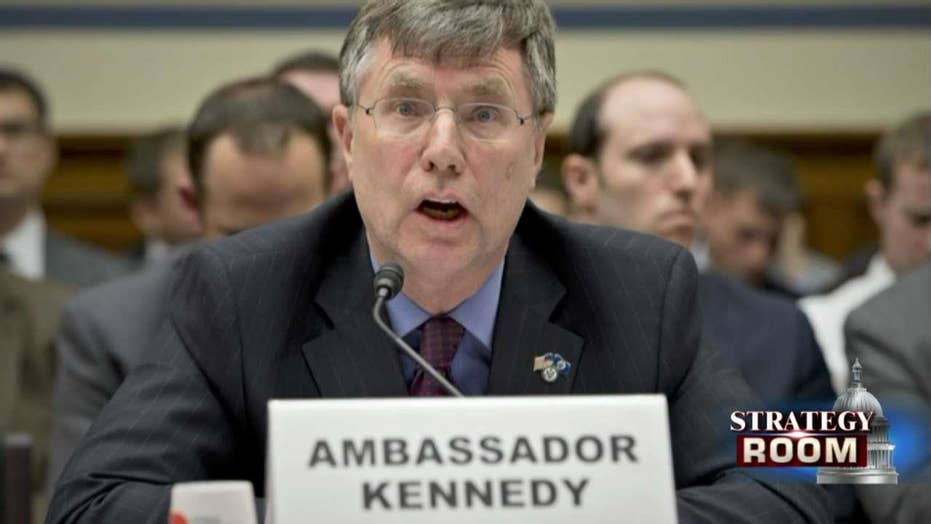 From the Benghazi cover up to a clumsy attempt to trade favors with the FBI, a long string of State Department scandals dating all the way back to 1998 has one central figure in common: Patrick Kennedy.

The undersecretary of state for management, Kennedy, has been directly involved, if not at the very center, of the many biggest scandals of Hillary Clinton’s State Department. He wields considerable power because in the State Department because he oversees every activity, including diplomatic security, information technology, contracting, acquisitions, construction, budget, finance, personnel, assignments, consular affairs and State’s FOIA office, that is necessary for the department’s operation and our embassies abroad.

WHAT THE BENGHAZI ATTACK TAUGHT ME ABOUT HILLARY CLINTON

Kennedy has a reputation as a micromanager who involves himself in the most mundane details. For example, he personally approved every U.S. official who worked in or visited the U.S. Embassy in Tripoli, Libya, or its mission in Benghazi. To track their movements, he required the embassies to provide daily reports of every U.S. official in the country.

His determination to master the minutiae of the U.S. mission to Libya’s operations extended to security. He made the fateful decision that reduced professional American security personnel assigned to Tripoli from 34 to 6, with tragic consequences for Ambassador Chris Stevens, Sean Smith, Glenn Doherty and Ty Woods.

He made the fateful decision that reduced professional American security personnel assigned to Tripoli from 34 to 6, with tragic consequences for Ambassador Chris Stevens, Sean Smith, Glenn Doherty and Ty Woods.

Kennedy has been involved in fatal security decisions in the past. In 1998, he was acting assistant secretary for diplomatic security when the U.S. Embassy in Nairobi was bombed. Ten Americans, and hundreds of Kenyans lost their lives. Prior to the bombing, U.S. Ambassador Prudence Bushnell sent numerous requests for security upgrades, which were denied. Nevertheless, Kennedy was exonerated from blame for both the Nairobi and Benghazi security failures because “he did not know enough about security.”

The latest scandal, reported last Saturday by Fox News  points to “a senior State Department official [Kennedy] who proposed a ‘quid pro quo’ to convince the FBI to strip the classification on an email from Hillary Clinton’s server – and repeatedly tried to ‘influence’ the bureau’s decision when his offer was denied, even taking his plea up the chain of command, according to newly released FBI documents.

Documents published Monday morning confirm the account. Notes from an interview with an unnamed FBI official reveal that Kennedy tried to horse-trade with the FBI, offering additional slots for the bureau overseas if they would de-classify a particular email marked ‘SECRET.’

According to the documents, an unnamed individual said he was ‘pressured’ to ‘change the classified email to unclassified.’”

The “quid pro quo” scandal that has recently surfaced is not the beginning of Kennedy’s involvement with Clinton’s email arrangements. In testimony, Kennedy stated that he corresponded with Clinton frequently via her private email address. Despite being responsible for the State Department’s IT security, he never protested Clinton’s arrangement. Instead, he allowed Eric Boswell, the assistant secretary for diplomatic security and State’s top IT professional, to protest its danger. Boswell later became one of the State Department’s Benghazi scapegoats after the death of Stevens and three others.

In 2013, State’s office of the inspector general reported that two years earlier, Kennedy halted further investigation of a credible report that a U.S. ambassador abroad had solicited prostitutes in parks near the U.S. embassy. Kennedy handled that matter as a “management issue” and allowed the ambassador to return to his assignment. Meanwhile, between 2009 and 2011, diplomatic security investigated 13 prostitution-related cases involving lower-ranking officials. State OIG noted that none of these investigations was halted and treated as a “management issue.”

Documents show that Kennedy was aware of the effort to change Huma Abedin’s personnel status from fulltime federal employee to contractor. Despite his reputation for micromanagement and his responsibility for personnel and contracting at State, Kennedy does not appear to have intervened in a decision that allowed Abedin to earn nearly $500,000 a year from four different employers, three of which were not the federal government.

Retired Foreign Service Officer Joan Wadelton has argued that the magnitude of Kennedy’s job gives him control over virtually every administrative matter at State — including virtually all of the money the department spends. No one person, even someone of excellent judgment and integrity, could manage such a massive portfolio. Nor should one person be allowed to. In her opinion, the only way to create checks and balances within the State Department that will protect the public interest is to eliminate Kennedy’s position and rearrange the bureaus that currently report to him into four groups, whose leaders would report directly to the deputy secretary. The four groups would be: ersonnel; contracting and acquisition; diplomatic security and finance and budget.

As Congress examines the “quid pro quo” scandal, I hope it also considers systemic reform of the State Department as part of the solution.