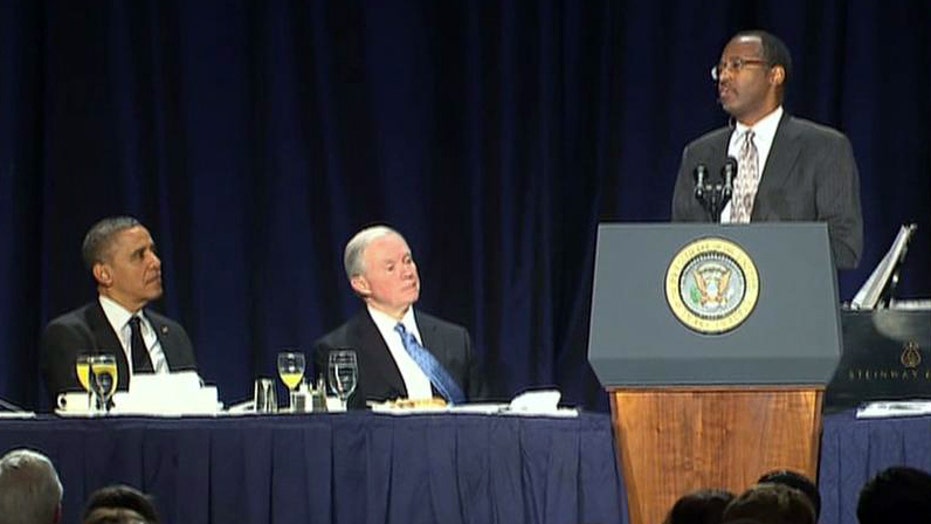 Was Dr. Benjamin Carson's critique of ObamaCare in front of Pres. Obama at National Prayer Breakfast the wrong time for politics?

Ben Carson, MD, the head of pediatric neurosurgery at Johns Hopkins, has done as much with one speech to present his bonafides for president of the United States as a man can do—not least of all because he delivered that speech at the National Prayer Breakfast in Washington, in front of President Obama, with whose policies he obviously disagrees.

Carson’s ideas about how the flat tax mirrors the biblical notion of tithing, his mention of “ObamaCare” and how it has put America’s health care system on the road to ruin, how political correctness is stifling honest dialogue and the national debt being immoral could not have sat well with President Obama.  Many have mistakenly argued that the Prayer Breakfast was an inappropriate forum for such unadorned, challenging statements.

Well, let me tell you something about Ben Carson and other surgeons I was privileged to train with at Johns Hopkins during my medical and surgical rotations before I chose to become a psychiatrist:  They don’t pull punches when a battle needs to be joined, and they don’t hate the people to whom they have to deliver bad news.

Ben Carson has sat with many, many families and told them that their children had tumors growing inside their heads and that he would need to cut open their skulls and remove those malignancies.

He has told fathers and mothers and brothers and sisters that there was a chance that the people they loved the most in the world would not survive the next six or twelve hours in the operating room.

And, in 1987, Carson had to have told the parents of twins joined at the head that they both might perish under the knife, before he made history by walking into an operating room and separating them from one another, in a 22-hour procedure that left both alive.

So anyone who tells Ben Carson that he ought not tell the truth because his words will be heard in a traditionally “non-partisan” arena ought to reconsider.

What America needs is a great surgeon who doesn’t much care whether you ask him what ails you and how fix it even if that question comes in the hallway, the waiting room, in the cafeteria, in the street, over breakfast or in a chapel. Why? Because, for him, the truth is the only thing worth speaking, no matter the audience.

Another thing about Ben Carson and other surgeons I scrubbed in with:  They like to leave clean margins. That means that when they see pathology—like cancer—they want to cut it away so that only healthy tissue is left behind.  They have to be willing to make people bleed, in order to make them live.

They aren’t afraid of fallout. No half-measures will do. And the specimens sent off to pathology tell the truth every time.  Either they got it all, or they didn’t.  There’s no spin involved.

So, Ben Carson need not apologize to President Obama. The surgeon made his diagnosis.  He enunciated a treatment plan that could save the life of this nation.  And anyone who argues that he should have held his tongue out of “respect” doesn’t understand that telling the truth to a man, however powerful, is still the ultimate form of respect.