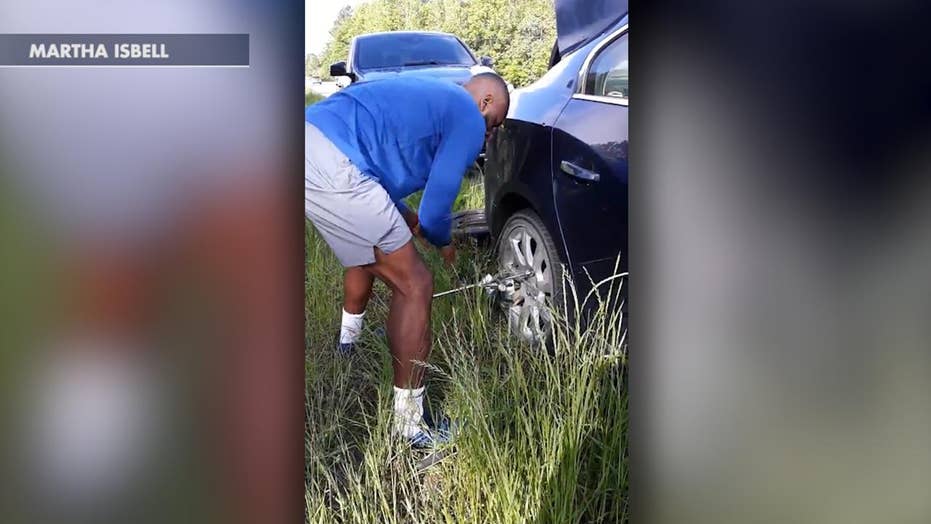 Raw video: Indianapolis Colts linebacker Darius Leonard helps change a blown out tire for his former high school teacher after he spotted her on the side of the road on Easter Sunday.

Twenty-plus years ago when I had the high honor to work for and with former Sen. Bob Dole, he and I once talked about the word “Hero.”

A word, despite his incredibly courageous and valorous actions during World War II, he would never claim for himself and would recoil in honest humility and protest should someone try to attach the word to him for service which saw him all but mortally wounded while trying to rescue a fellow soldier under withering enemy fire.

At the time we spoke, the discussion centered around the question of if the word “Hero” was being used a bit too loosely and associated with accomplishments which might have been “Amazing,” “Incredible,” and “Awe-inspiring,” but not “Heroic” in the traditional sense of the word.

That conversation flooded back into my mind when I was fortunate and blessed enough to learn of the story of Marty Jacobs.

Most people are now coming to learn of Marty Jacobs because his son Josh was recently drafted in the first round by the Oakland Raiders of the National Football League.

But in reality, it’s the other way around.  People now know of Josh Jacobs and his amazing athletic prowess only because of the quiet, inspirational, and continually selfless sacrifice of his father.

Alabama running back Josh Jacobs poses with NFL Commissioner Roger Goodell after the Oakland Raiders selected Jacobs in the first round at the NFL football draft, Thursday, April 25, 2019, in Nashville, Tenn.(AP Photo/Mark Humphrey)

Marty Jacobs didn’t run from responsibility.  He embraced it.

Marty lived in Tulsa, Oklahoma.  When his son Josh was in the fourth grade, Marty and his wife split up.

Marty got custody of Josh, but money was beyond tight and things went sideways quickly as the apartment they were supposed to move into suddenly was not ready and the only option left, was for the two of them to live in Marty’s SUV.

DAD THANKS NFL DRAFT PICK FOR 'RISKING EVERYTHING' TO SAVE DAUGHTER

Night after night, Marty would drive around Tulsa looking for a safe spot for him and his son to sleep away from the constant danger of the streets.

Said Josh recently about that experience: “If he ever slept, I didn’t see it.  Every time I woke up – whether it was morning or the middle of the night – he was awake. Watching out.  Protecting me.”

Finally, the apartment was ready and Marty moved his son in.  Two months later, Marty won custody of his three other sons and daughter and moved them in as well.

Then, Marty Jacobs lost his job and things went from bad to worse when the family was evicted.

Basically, for the next two years, the Jacobs family was homeless bouncing from cheap motel, to the streets, back to a cheap motel.

It was a life and a terrifying existence myself, my brother, and my sister knew all too well in a different time and a different city.

Said Josh in part: “On bad days, we would eat rice and beans or ramen noodles.  I was the king of white rice and ramen noodles.  My dad used to buy them in big quantities so he could feed us all.  I’d cook for everybody.  Some nights, when the food supply was really thin, my dad wouldn’t eat.  I would try to give him some of my food, but he wouldn’t let me.”

Through the worst of times, Marty never complained while always putting his needs last.  Not only was he always there for his children, but kept them engaged, creative, and laughing.  Always laughing.

Said Josh: “Even when our stomachs were empty, we would spend all night laughing together – as a family.”

It was also around that time that the man taking any work he could get to provide for his children warned them against taking the “easy ways out” of abject poverty.  Said the Dad who always walked the walk: “The easy way out usually isn’t the right way.  It’s hard work and perseverance that gets rewarded.  Not shortcuts.”

Marty Jacobs never took a shortcut in his life.  A life that was lived only to provide for his children.

“Pops landed a pretty steady job.  We left the motels behind and moved into a house…one in the rough part of town with the gunshots and the street-fights and the helicopters.  Food was still hard to come by.  Money was still tight.  Life was still a struggle…but we finally had a place to call home.”

They had a family, they had faith, they had laughter, they had a home, and they had a future, only because of the love, integrity, and never-ending self-sacrifice of their father.

Josh Jacobs in a fine young man who will no doubt break records in the National Football League.

But it is Marty Jacobs who is the hero of this story.

It is his story and his life, and others like it, Hollywood and the media should showcase time and time again.

Like Bob Dole before him, Marty Jacobs personifies the word “Hero.”

People of courage and character who lift us all.