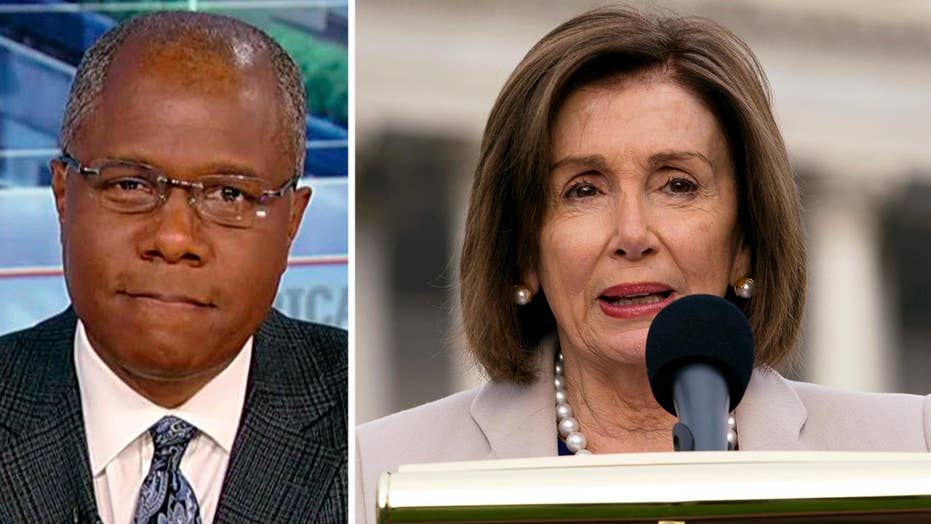 Speaker Pelosi's impeachment inquiry is being conducted in 'Schiff's dungeon in the basement of the Capitol,' says Fox News contributor and syndicated columnist Deroy Murdock.

Via the miracle of Amazon, I recently sent House Speaker Nancy Pelosi fresh copies of "All the President’s Men" and "The Final Days" by Bob Woodward and Carl Bernstein along with this note:

“Dear Nancy: These fine books on Watergate should help you not embarrass yourself again by claiming that Ukrainegate is ‘so much worse than even what Richard Nixon did.’ This is absurd and patently false. Enjoy! All my love, Deroy Murdock”

Pelosi puzzled millions on Nov. 14 when she told journalists about Trump and Ukraine-o-rama: “The cover-up makes what Nixon did look almost small.” And she told Face the Nation, “I mean, what the president did was so much worse than even what Richard Nixon did.”

GEOFF SHEPARD: TRUMP IMPEACHMENT AND WATERGATE – AS A NIXON DEFENSE ATTORNEY I CAN COMPARE THEM

Pelosi’s comments expose her as either deeply uninformed or deeply dishonest.

The speaker should use Congress’ Thanksgiving recess to read Woodward and Bernstein’s riveting, real-time Watergate chronicles. This should remind Pelosi that saying that Ukraine-o-rama is “so much worse” than Watergate is like calling a Chihuahua more ferocious than a Rottweiler.

President Trump told Ukrainian President Volodymyr Zelensky, “I would like you to do us a favor” during their July 25 phone call. This involved probing corruption, including at Burisma, the Ukrainian natural gas company with unusual ties to Hunter Biden and his father, former Vice President Joe Biden. At least 11 times, Zelensky and other Ukrainian officials have said that they felt neither pressured nor blackmailed into launching such an investigation, which they ultimately never did.

And the 55-day pause in lethal military aid, while Team Trump evaluated Zelensky’s commitment to his anti-corruption promises, ended on Sept. 11, when assistance reached Kiev. As U.S. Ambassador to the European Union Gordon Sondland testified Wednesday, Trump told him what he wanted from Ukraine: “I want nothing. I want no quid pro quo. I want Zelensky to do the right thing.”

Compare those innocuous facts with this chilling outline of Watergate, which began with actual crimes.

The Washington Post called the break-in part of “a massive campaign of political spying and sabotage conducted on behalf of the Nixon re-election effort.” This confirmed that Watergate was no one-off stunt. It was a cavalcade of electoral lawbreaking.

Compare the innocuous facts regarding Trump's call with the Ukraine president with this chilling outline of Watergate, which began with actual crimes.

Most of this nefarious enterprise was the cover-up that quickly ensued, with President Richard Milhous Nixon at the helm.

To encourage the burglars to shut up about the break-in — and their September 1971 dirt-digging breach of the Los Angeles office of Dr. Lewis Fielding, psychiatrist to Pentagon Papers' chief leaker Daniel Ellsberg — Team Nixon paid them “hush money.” This constituted conspiracy and obstruction of justice.

When the burglars demanded more money to clam up, White House Counsel John Dean entered the Oval Office on March 21, 1973. He hoped that Nixon would stop digging himself into a rapidly collapsing hole and perhaps beg the American people to forgive an overzealous prank that got way out of hand.

“We have a cancer within — close to the presidency, that’s growing,” Dean told Nixon. “It grows geometrically now, because it compounds itself.” Dean then explained that the burglars wanted more cash, to keep their lips zipped.

“How much money do you need?” Nixon asked Dean, as captured on the recording system that would undo the president.

Dean answered: “I would say these people are going to cost a million dollars over the next two years” — about $5.9 million today.

Rather than back down, Nixon doubled down.

“We could get that,” Nixon said. “You could get a million dollars. You could get it in cash. I know where it could be gotten.” Dean also proposed laundering this money, “And that means you have to go to Vegas with it or a bookmaker in New York City.”

Forthwith, the burglars got their greenbacks. In fact, as Woodward and Bernstein later reported, “Within 12 hours of the Oval office discussion, Watergate conspirator E. Howard Hunt Jr. received $75,000 cash.” A July 5, 1974 FBI Watergate summary offers this eerie detail: “Hunt’s wife died on Dec. 8, 1972, in an aircraft crash in Chicago. Bureau agents recovered $10,000 in one hundred dollar bills in Mrs. Hunt’s purse at the time of the crash.”

Nixon’s conspiracy to obstruct justice had reached epic proportions long before this million-dollar conversation. Nixon insisted publicly that he knew nothing about the cover-up or hush money until Dean alerted him on March 21, 1973. In truth, the final, fatal “Smoking Gun Tape” revealed that the supposedly clueless Nixon ordered the cover-up nearly nine months earlier. On June 23, 1972, just six days after the break-in, Nixon commanded that the CIA torpedo the FBI’s fledgling probe.

White House chief of staff Harry Robbins “H.R. Bob” Haldeman suggested to Nixon, “the way to handle this now is for us to have [CIA official Vernon] Walters call [acting FBI chief] Pat Gray and just say, ‘Stay the hell out of this.'"

Nixon concurred and instructed that the CIA “should call the FBI in and say that ‘We wish for the country, don’t go any further into this case, period!’”

How did the House of Representatives' behavior then compare with today?

On Feb. 6, 1974, the House voted 410-4 to launch Nixon’s impeachment. Fully 98 percent of Republicans decided to commence a GOP president’s impeachment.

Conversely, when the House voted 232-196 on Oct. 31 to advance an impeachment inquiry against Trump, exactly 0 percent of Republicans chose to begin impeachment against a GOP president.

If Nancy Pelosi truly believes that Ukraine-o-rama is “so much worse” than Watergate, she needs much more than an 11-day, book-filled vacation.