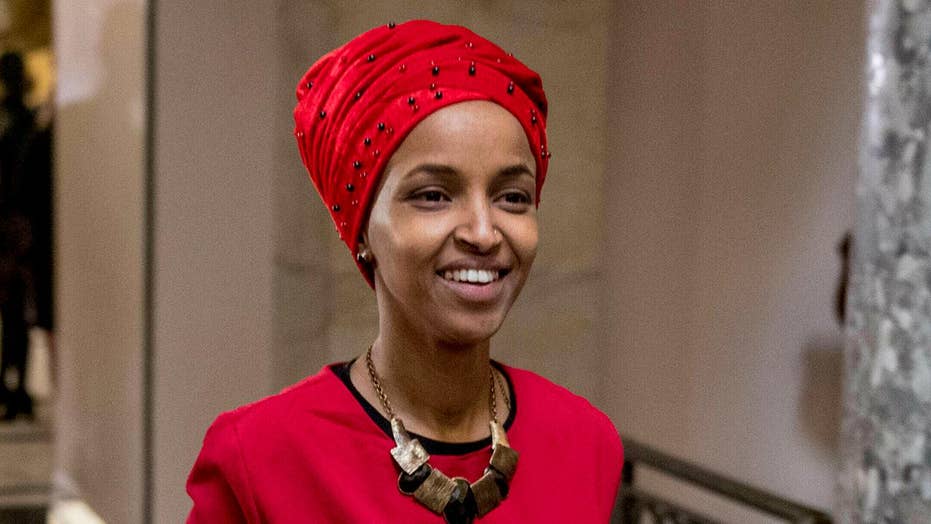 Freshman Rep. Ilhan Omar, D-Minn., has drawn sharp criticism recently for comments widely characterized as anti-Semitic – though she denies being an anti-Semite.

But try as she might to claim that her harsh condemnations of the Jewish state of Israel do not mean she is hostile to the Jewish people, her denials fall short. Her position makes as much sense as someone claiming to hate America but not Americans. The Jewish people are intertwined with the Jewish national homeland.

It doesn’t help that rabid anti-Semite and Minister of the Nation of Islam Louis Farrakhan has encouraged Omar to stand firm in her anti-Israel comments.

And please, don’t tell me – as some of Omar’s defenders do – that we cannot criticize Omar because to do so shows evidences Islamophobia – a supposed hatred of Muslims and Islam. Like Omar, I am a Muslim woman. I don’t hate my co-religionists. But I don’t feel that to be a good Muslim I have to hate Jews or Israel.

The falsehood of the besieged Muslim in America fits with the hunger for victimhood ideology.

Islamophobia is not anti-Muslim xenophobia – the two are distinct. Islamophobia is Islamism’s prime vehicle for the cultivation of a manufactured victimhood.

The path to espouse anti-Semitism, demonize Israel, Israelis and Jews – and then shapeshift the claims to Islamophobia, meaning no one can criticize Islamists without being labeled a bigot – is a gesture familiar in Islamist politics.

Muslims in America are not victims. But there is a great deal of political capital to be gained by both Islamists and Democrats in saying so.

Omar can’t deny that she is one of the harshest critics of the Jewish state in Congress. She is an enthusiastic backer of the Boycott, Divestment and Sanctions Movement, which seeks to cut off Israel from trade and other relations with the rest of the world. BDS amounts to economic warfare against Israel.

But Omar wants to pretend that these positions have nothing to do with her feelings about the Jewish people.

The Times of Israel reported that Omar again apologized Tuesday in a conference call with Jewish organizations for her two tweets suggesting that the pro-Israel American Israel Public Affairs Committee (AIPAC) pays politicians to be pro-Israel. In fact, AIPAC doesn’t endorse political candidates or contribute money to their campaigns.

Yet despite her denials of anti-Semitism, Omar is already proving to be a headache for America’s Muslims. We don’t want her to be our public face.

As a naturalized American citizen, I – like the vast majority of my fellow American Muslims – want to be accepted as part of this diverse country. We embrace the ideals of freedom of religion, tolerance and the other virtues that make the U.S. such a great nation.

Omar is also proving to be an embarrassment for the Democratic Party, which counts on Jewish votes, Jewish financial support, Jewish campaign workers and Jewish volunteers to win elections.

Omar is also proving to be an embarrassment for the Democratic Party, which counts on Jewish votes, Jewish financial support, Jewish campaign workers and Jewish volunteers to win elections.

Amid calls for Democrats to remove Omar from the House Foreign Affairs Committee, which deals with U.S. assistance to Israel, the burden is now on Omar to deny her apparent Islamist leanings. And the burden is on her House colleagues to eschew Islamist anti-Semitism – and indeed all forms of anti-Semitism.

Omar’s apologies for her comments are not enough. It is the “yes, but” response that Holocaust scholar Deborah Lipstadt warns of as “the slippery slope of moral equivalence.”

The consequences of the Democratic Party appearing to endorse what some see as a pro-Islamist U.S. policy could be calamitous – for the United States, Egypt, Saudi Arabia, Israel and the Kurds.

The Middle East is already rife with mistrust of the United States following the controversial (and now reversed) Iran nuclear deal; the vacillation of U.S. policy towards Syria; U.S. abandonment of the Kurds, and the burden of an  increasingly predatory Iranian state.

Today this precarious climate has already triggered an undeclared regional nuclear arms race, while inviting Russia into the Eastern Mediterranean for the first time since 1970s.

If the United States adopts an explicitly pro-Islamist, anti-Semitic, anti-Israel position – which is the position Omar advocates – several nations and terrorist groups may be poised to exploit worsening regional instability.

Yet instead of universal repudiation, some Democrats are circling the wagons around Omar. The Jewish Insider reported last week that Sen. Bernie Sanders, the Vermont democratic socialist who announced his candidacy for the Democratic presidential nomination Tuesday, called Omar last week to express his support.

The Jewish Insider quoted Sanders as saying on a conference call: “I talked to Ilhan last night to give her my personal support. We will stand by our Muslim brothers and sisters.”

Sadly, Sanders extolled the virtues of a brotherhood not of Muslims and Jews, but of American Islamism and the American left.

As a Muslim woman, I experience in my own circles Muslims who express concern that the plight of the Palestinians is a valid basis for the criticism of Israel – believing expression of that concern is not anti-Semitism.

Some pluralist Muslims recognize Omar’s version of Islam as a false, “Arabized” version of Islamism, not Islam itself. Certainly, there is no anti-Semitism in critiquing Israel for its policies. But Omar’s stance demonstrates an anti-Israel bias.

Is there a double standard in the unwillingness of Democrats to criticize apparent Islamists even in the face of anti-Semitism?

Islamist thinking has exerted a great deal of influence on liberal ideology, particularly in many American universities. Left-wing groups coalesce with Islamist ones purportedly for “social justice” purposes.

Proposing to speak about Islamism, I was discouraged from accepting a previous unsolicited invitation at Harvard Law School by a student group on the basis of concern for distress I could cause to pro-Arab, pro-Palestinian students.

Three months later I delivered the same lecture in a 93 percent Sunni Muslim nation to Muslim and Yazidi Kurdish survivors of ISIS at the University of Duhok in Iraqi Kurdistan. I was met with widespread appreciation of my understanding of real-world Islamism.

We have seen this also on a national scale in the Women’s March’s notorious embrace of Farrakhan.

This is a precarious time for the U.S. to be further jeopardizing its image both abroad and at home by tolerating and appearing to endorse anti-Semitic, Islamist speech and ideology.

While the comments of Omar are defended as innocuous and unintentionally harmful, it is time for Democrats to divorce themselves from her hateful attitudes and expressions that harm the U.S. standing in the world.